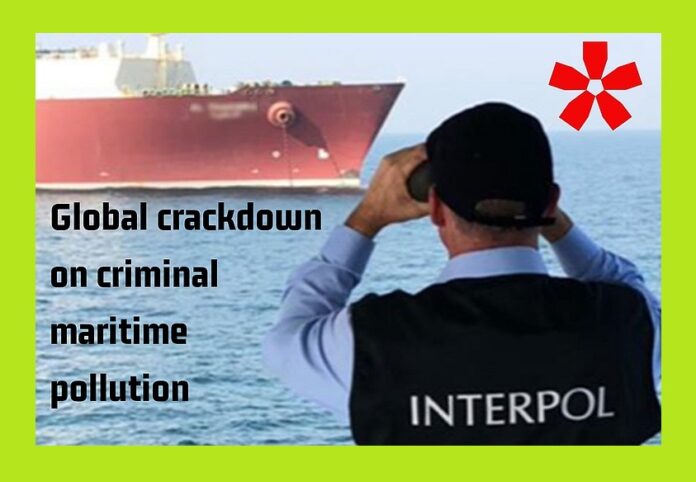 (www.MaritimeCyprus.com) A worldwide law enforcement effort designed to tackle criminal maritime pollution backed by Interpol and Europol has resulted in the discovery of hundreds of offences and exposed serious cases of contamination across the globe.

INTERPOL has issued a news release stating that a month-long international law enforcement operation involving 58 nations revealed more than 500 maritime pollution incidents, including illegal discharges of oil and garbage from vessels; shipbreaking; breaches of ship emissions regulations; and pollution on rivers and land-based runoff into the sea.

An international law enforcement operation against maritime pollution has revealed hundreds of violations and exposed serious cases of contamination worldwide.

Codenamed 30 Days at Sea, the month-long (1-31 October) operation saw some 276 law enforcement and environmental agencies across 58 countries detect more than 500 offences, including illegal discharges of oil and garbage from vessels, shipbreaking, breaches of ship emissions regulations, and pollution on rivers and land-based runoff to the sea. Steered by a global network of 122 national coordinators, 30 Days at Sea involved environmental, maritime and border agencies, national police forces, customs, and port authorities.

More than 5200 inspections have resulted in at least 185 investigations, with arrests and prosecutions anticipated.

“Criminals believe marine pollution is a low-risk crime with no real victims.  This is a mistake and one which INTERPOL and our partners are addressing as demonstrated by this operation,” said INTERPOL Secretary General Jürgen Stock.

In Germany, a vessel discharged 600 litres of palm oil into the sea. Ghana uncovered gallons of waste oil in large bottles thought to be illegally dumped at sea.

Authorities prevented an environmental disaster in Albania by securing waters around a sinking vessel containing some 500 litres of oil. Similarly, the pollution threat resulting from the collision of two ships in French waters was contained thanks to preventive action during the operation.

Innovative technologies permitted authorities to detect offences, including the use of satellite images (in Argentina and Sweden), aerial surveillance (Canada and Italy), drones (Nigeria, Indonesia and Pakistan) and night vision cameras.

In a shift towards prevention, visible surveillance technologies used in Qatar and Norway resulted in stricter compliance with regulations.

UN Environment Executive Director Erik Solheim said that the issue of illegal marine pollution is one that global communities may well be able to tackle successfully in the next decade.

“But we need the help of our law enforcement partners to make sure that there is no impunity for the perpetrators of marine pollution crime,” added Mr Solheim.

"This is why law enforcement must team up on a global scale to build strong international links with specialised experts so we can tackle this devastating crime while ensuring a healthier, safer planet for all." responded Wil van Gemert, Deputy Executive Director of Europol, Operations Directorate.

INTERPOL’s Pollution Crime Working Group launched Operation 30 Days at Sea in response to a call to boost international law enforcement action against emerging environmental crime through action in the field.

Coordinated by INTERPOL’s Environmental Security Programme in close partnership with Europol, 30 Days at Sea was driven by a range of cooperative enforcement actions, including:

30 Days at Sea is followed by an awareness campaign in partnership with UN Environment to illustrate the impact marine pollution has on economic development and human and environmental security.

From 13 November to 13 December, look for the hashtag #PollutionCrime, along with #CleanSeas on Twitter, and retweet to show support in combating marine pollution crime.