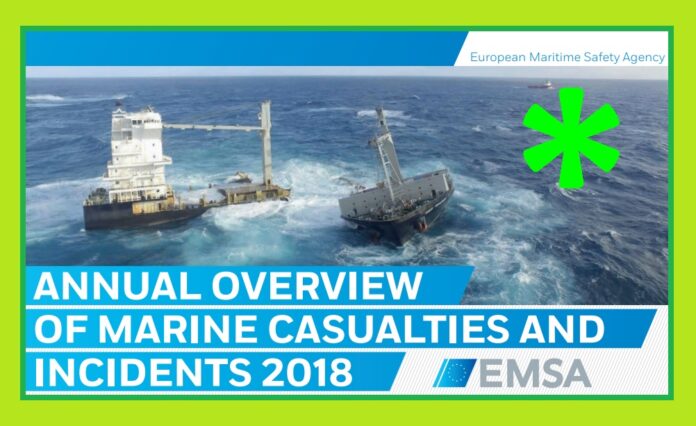 (www.MaritimeCyprus.com) European Maritime safety Agency has issued the Annual Overview of Marine Casualties and Incidents. It consists in a high-level analysis of accidents reported by the EU Member States. With 3301 occurrences reported in 2017, the total number of occurrences recorded in EMCIP has grown to over 20000. This amounts to an average of 3315 casualties per year over the past four years.

The number of very serious casualties has continuously decreased since 2014 with 74 reported in 2017. A similar improvement was noted for the number of ships lost, with 12 reports as compared with 41 in 2014.

During the 2011-2017 period, 405 accidents led to a total of 683 lives lost, which represents a significant decrease since 2015. Crew have been the most affected category of victims with 555 fatalities.

While the number of occurrences involving cargo ships and service ships stabilized and the number of passenger ships and ‘other ships’ slightly decreased in 2017, a continued increase has been noted in relation to fishing vessels since 2014.

More than 1500 cargo ships were involved in accidents that resulted in 25 fatalities in 2017, the lowest number since the EU legislation is in place.

With a total of almost 120, fishing vessels remains the category of ship with the highest number of ships lost over the 2011-2017 period. However, the number of fishing vessels lost dropped from 21 to six in two years’ time. Moreover, there was a decrease from 60 to 13 lives lost in 2017.

Almost half of the casualties that occurred on board a passenger vessel involved ferries. While no ships were lost in 2017, the number of fatalities has also continued to decrease with less than five fatalities.

No service ships were lost in 2017. While the number of fatalities remained identical, fewer injuries were reported.

200 ‘other types’ of ships have been involved in a marine accident. Despite the limited number of such ships, this resulted in an increase in fatalities and injuries, mainly on leisure boats with engines or sails.

Half of the casualties were related to issues of a navigational nature, such as contacts, grounding/stranding and collision. As concerns occupational accidents, 40% were attributed to the slipping, stumbling and falling of persons.

While the departure phase appeared to be the safest phase of a voyage for most ships, it was noted that casualties mainly occurred in internal waters and port areas.