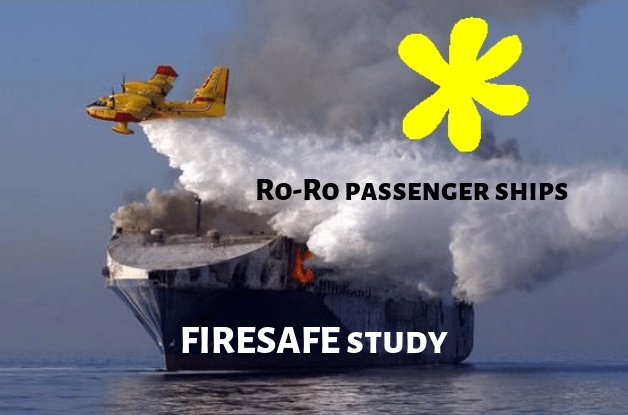 (www.MaritimeCyprus.com) Ships have been designed with Ro-Ro spaces for many years with first roll-on roll-of ships being train carrier and invented in 1840 decade in UK, was extended to military purpose during World War I to cross the channel between UK and France and commercially adapted to all road vehicles after proven effectiveness with World War II landings.

The concept is very easy to understand, it is a space into which one could drive cars, trucks and cargo, roll on roll off. However, the definition has always been somewhat complicated. For ships built prior to 2002 the definitions and the requirements are a little bit different than for ships built after 2002. The explanation is that a comprehensive review of chapter II-2 of SOLAS was done which included the introduction of more performance based regulations.

With regards to fire safety and fire development it is sufficient to categorize the spaces into either open, closed or weather decks. A ro-ro space is defined as a closed space if it is not an open or a weather deck. This way of defining a closed space leads to some difficulties in a fire analysis since a closed deck could have openings that cover 9.5% of the sides.

This is a study commissioned by the European Maritime Safety Agency, EMSA. It investigates risk control options (RCOs) for mitigating the risk from fires on Ro-Ro decks. Historical risks and hazards have been found and complemented with two fire hazard identification (HazId) workshops. The project developed three risk models to be used to investigate the effects of RCOs on the PLL and costs. Six RCOs were selected for quantitatively analysis in the risk models for the risk of electrical fire ignition and six for drencher failure. Many other RCOs are very promising and could be further analysed in the future. The selected RCOs for this study were:

These RCOs were analysed in a cost benefit analysis which calculated the GCAF and NCAF values for the different RCOs. After analysing the outcome of the cost benefit assessment, the following conclusions could be drawn: