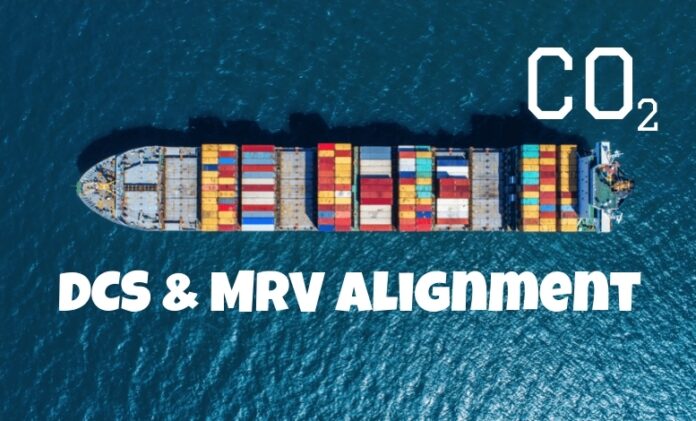 (www.MaritimeCyprus.com) On 4 February 2019 the European Commission (EC) tabled a proposal concerning the amendment of Regulation (EU) 2015/757 on the monitoring, reporting and verification of carbon dioxide emissions from maritime transport (the “EU MRV Regulation”). The main objective of the proposal is to amend the EU MRV Regulation in order to take account of the new Global Data Collection System (“IMO DCS”) for fuel oil consumption of ships that was introduced by the International Maritime Organisation (IMO) in March 2018. The globally applicable IMO DCS system currently runs in parallel with the EU MRV, thus duplicating regulation for shipping companies whose ships sail both inside and outside the EU. In this article we provide a recap of both data monitoring and reporting systems, comparing and contrasting the two as well as highlighting the key amendments that are being proposed by the EC.

As part of the IMO’s efforts to reduce greenhouse gas emissions from ships (by 50% by 2050) the amendments to MARPOL Annex VI, Regulation 22A, on the fuel oil data collection of ships came into force on 1st March 2018. Regulation 22A requires ships of ≥5,000 gross tonnage sailing internationally to collect consumption data for each type of fuel oil they use. All relevant ships were required to have a Data Collection Plan (DCP) within the Ship Energy Efficiency Management Plan (SEEMP) Part II and these were to be submitted for review to the Flag administration or a duly authorized organization before 1st September 2018. The review was to have been completed by 31 December 2018 in time for the start of the first annual compliance period which runs from 1 January 2019 to 31st December 2019. This means that from 1 January 2019 the following data must be collected for the ships and submitted to their Flag State for that compliance period:

The IMO’s ‘2016 Guidelines for the development of a Ship Energy Efficiency Management Plan (SEEMP)’ set out ways in which ships can monitor fuel oil consumption, such as by using bunker delivery notes, flow meters, and bunker fuel oil tank monitoring on board. Importantly and unlike the EU MRV, the IMO DCS comprises any activity carried out by ships operating in the marine environment. Thus, such maritime activities as dredging, pipeline laying, ice-breaking, fish-catching and off-shore installations are also included.

Data of the ships first compliance period is to be reported to the Flag State by the end of March 2020 (i.e. a 3 month reporting period following the end of the compliance year). Following this, and assuming all is in order, the Flag State is to issue a Statement of Compliance by no later than 1 June 2020 and will pass on the data to the IMO. Analysis of the data by the IMO will take effect from Q3 of 2020 and subsequently on an annual basis. The “Initial IMO Strategy on Reduction of GHG Emissions from Ships” (Resolution MEPC.304(72) adopted on 13 April 2018) signals that further emission reduction mechanism(s), possibly Market-based Measures (MBMs) to incentivize greenhouse gas (GHG) emission reduction will be decided upon in Spring 2023 at the MEPC 80.

The IMO DCS began exactly one year after the EU MRV. Whilst the IMO DCS requires the reporting of ships’ fuel consumption data, the EU MRV requires the reporting of CO2 emission; weight of cargo carried and/or the number of passengers carried (as applicable) and energy efficiency. The EU MRV applies to commercial ships carrying passengers or cargo to/from European ports. The EU MRV does not apply to ship movements and activities which are intended for dredging, ice-breaking, pipe-laying or offshore installation activities. Thus with the exception of certain ships (those not transporting cargo or passengers for commercial purposes), the EU MRV scheme requires shipping companies to monitor the following for each ship above 5,000 gross tonnage they owned and/or operated since 1 January 2018:

Unlike the IMO DCS where ships must report fuel consumption data to their Administration or any organisation duly authorised by it (“Recognised Organisation”) within three months after the end of each calendar year, the EU MRV requires the submission of data on a per-voyage basis in addition to per annum (unless all of a ship’s voyages during the reporting period are between ports under the jurisdiction of a member state and the ship performs more than 300 voyages during the reporting period in which case they can report annually). Where there is a change in company owning the ship during the reporting period then the new company will be responsible for making sure that the ship complies with the requirements of the MRV Regulation for the entire reporting period. The Regulation recommends that "to facilitate the fulfilment of these obligations, the new company should receive a copy of the latest monitoring plan and document of compliance, if applicable”. The Monitoring Plan needs to be updated and verifiers informed any time

(a) a change of company occurs;

(b) where new CO2 emissions occur due to new emission sources or due to the use of new fuels not yet contained in the monitoring plan;

(c) where a change in availability of data, due to the use of new types of measuring equipment, new sampling methods or analysis methods, or for other reasons, may affect the accuracy of the determination of CO2 emissions;

(d) where data resulting from the monitoring method applied has been found to be incorrect.

A change of flag under the EU MRV would make no difference since the EU scheme captures any and all cargo and passenger ships that enter EU ports irrespective of their flag.

Shipping companies have until 30 April 2019 to submit the emissions report containing the required data for 2018 compliance to the EC and to the authorities of the Flag State. If a shipping company has carried out the emissions report correctly and has had it approved by an independent accredited verification body, a Document of Compliance (DoC) will be issued for each ship to be kept on board in readiness for inspections by local enforcement authorities and/or Port State Control. Inspections will commence on and from 30 June 2019 – the compliance deadline from which ships will be required to carry on board a valid DoC.

Unlike the globally collected fuel consumption data under the IMO DCS, CO2 data collected under the EU MRV is to be made publicly available. Publication of the EU MRV 2018 emissions data by the EC will take place for the first time on 30 June 2019.

The co-existence of the two monitoring, reporting and verification systems was anticipated in the EU MRV Regulation: “In the event that an international agreement on a global monitoring, reporting and verification system for greenhouse gas emissions or on global measures to reduce greenhouse gas emissions from maritime transport is reached, the Commission shall review this Regulation and shall, if appropriate, propose amendments to this Regulation in order to ensure alignment with that international agreement.” (Article 22 (3), EU MRV Regulation).

The following key amendments are proposed:

The following key aspects of the EU MRV Regulation are to be maintained:

Further details of the proposal amending Regulation (EU) 2015/757 to take account of the global data collection system are available here.