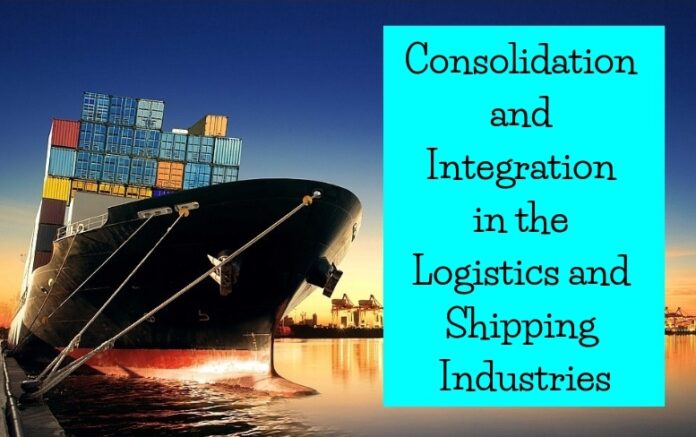 (www.MaritimeCyprus.com) Those who live in Hong Kong are familiar with the city’s giant conglomerates – your lunch, your phone service, your clothes and your flat may all be from the same group of companies. The same may soon become commonplace in the logistics and transport industries. In a world where countries are attempting to withdraw from multilateral engagements and build walls on the border, some major players in the logistics and transport industries are doing the opposite by integrating their businesses.

On the other hand, vertical integration happens when an entity acquires another entity above or below it in the chain of business. For instance, the French container shipping line CMA CGM acquired around 33% of CEVA Logistics in 2018. The two types of integration impact the integrating entities and the market in different ways.

The benefits of horizontal integration to the integrating entities are easy to understand. It increases efficiency thanks to the economies of scale and scope. Perhaps more importantly, it allows the integrating entities to expand their international presence to better meet the global service requirements of their clients. A recent example of this is Korea’s CJ Logistics acquiring the US-based DSC Logistics in 2018 to expand its US operation.

A recent Hong Kong example of horizontal integration is the Hong Kong Seaport Alliance (the “Alliance”) consisting of Hong Kong International Terminals, COSCO-HIT Terminals, Asia Container Terminals and Modern Terminals announced in January 2019. These 4 companies operate 23 of the 24 berths at Kwai Tsing Container Terminals. They will jointly operate and manage these 23 berths through the Alliance. The aims of the Alliance are said to be increasing efficiency, reducing emissions and making the Hong Kong port more competitive in relation to other ports in the region, but the businesses who deal with them are naturally more concerned about the impact of the Alliance on maintaining healthy competition. In the event that the Alliance does carry out cartel-like behaviour (for example, simultaneously raising terminal handling charges at all terminals controlled by the Alliance), those who directly interact with the terminals will obviously be affected. Other players who have no direct dealings with the terminals may also be affected by reason of shippers and shipping companies avoiding Hong Kong due to the high terminal charges. The Competition Commission has already started investigating whether the Alliance may prevent, restrict or distort competition in Hong Kong and we await their findings.

Vertical integration also offers clear advantages to the integrating entities, such as aligning interests,  reducing transaction costs and eliminating double marginalization (so that a more competitive price can be set in order to gain greater overall profits).  One particular area of integration which has been in the spotlight for a while is the land-sea integration. Traditional shipping companies are increasingly seeking to expand their land-based businesses such as terminal operation and road carriage. For example, the Chinese state-owned shipping giant COSCO acquired majority shares in the Hong Kong-based international terminal operator and logistics company OOCL in 2018. Maersk, the largest container shipping company in the world, is also looking for acquisitions to bolster its operation on land, in addition to a planned reorganisation which will integrate its logistics arm Damco back into Maersk itself.

Unlike horizontal integration, vertical integration usually has little adverse impact on the market because there is no reduction in the number of competitors. An exception to this is when one of the constituent entities of the integrated business dominates the market at a specific point in the supply chain or has exclusive access to certain key infrastructure. The monopoly status may be carried over to other parts of the chain. For example, if all terminals in a port are controlled by the same company, and that company has just merged with a shipping company, the merged entity will have an incentive to discriminate against other shipping companies by providing inferior services or charging higher prices.

Consolidation and integration in the logistics and transport industries have become increasingly common in recent years and there is no sign that they will stop any time soon. In fact, new developments in Hong Kong and in the world seem to point toward the direction of further integration. The Greater Bay Area initiative promotes the full integration of air cargo, ground transportation and warehousing services. It is only natural that some companies from these fields will start thinking about merging with other companies in order to provide better end-to-end services to the customers. Globally, the adoption of advanced IT technologies such as artificial intelligence and blockchain in day-to-day business activities has been growing. To effectively utilise these technologies, extensive data from each stage of the supply chain is required. The sharing of data that comes with a merger will be a powerful motivation for many companies.

To conclude, regular consolidation and integration will remain a feature of the logistics and transport industries for at least some time, and those who are in these industries can perhaps think about whether they themselves want to undergo the same process.