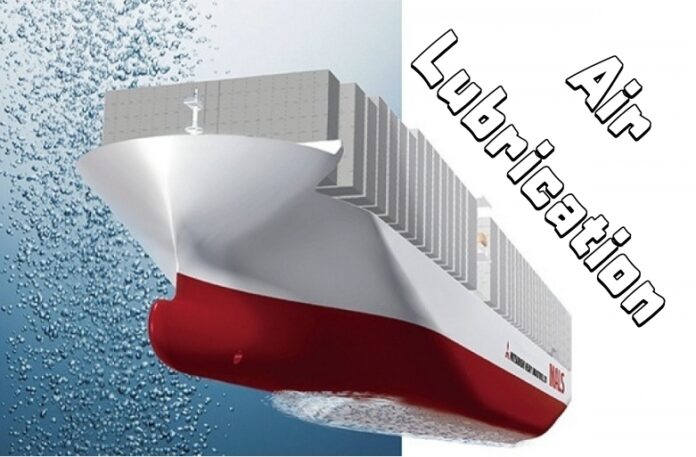 (www.MaritimeCyprus.com) One of the earlier applications using air bubbles on vessels was the Prairie/Masker Air System developed by the National Defense Research Committee in US Navy Laboratories since post World War II (Domenico, 1982). The Masker system emitted air bubbles under the hull, concealing engine room noise. The Prairie system emitted bubbles around the propeller.

Both systems were envisioned to silence the ship acoustically, thus making less detectable by sonar. Scientists and scholars later became interested in air lubrication technology for its potential to reduce drag resistance on the hull. In ship resistance, the three main components are frictional resistance, form resistance and wave resistance.

Skin frictional resistance depends on the wetted surface area of a ship. Air lubrication technology can reduce this frictional drag for vessels, especially since this technology does not introduce major changes in hull form and the air injection rate can be adjusted. Without major changes in hull form or change in operational speed, the form and wave resistance are mostly fixed and only frictional drag is reduced. Air lubrication is achieved by pumping air beneath the hull, reducing the area of hull in direct contact with the liquid flow, or in the case of discrete bubbles, by modification of momentum transport and average density in the boundary layer. There are three major categories of air lubrication technology being studied now: Bubble Drag Reduction (BDR), Air Layer Drag Reduction (ALDR), and Partial Cavity Drag Reduction (PCDR).