(www.MaritimeCyprus.com) The London insurance market’s Joint War Committee (JWC) has extended the high-risk area for shipping after the Fujiarah tanker attacks. The body said the list now includes Oman, the UAE and the Persian Gulf west of longitude 58°E. The committee also said claims from the attacks will be “significant.” The Joint War Committee has reviewed the Listed Areas, last altered 10th Dec. 2015, and has agreed the following changes which are incorporated in the new list as attached at the bottom of this article.

“The enmity between Iran and Saudi Arabia continues to create tensions as the Saudis believe Iran is trying to control strategic waterways,” JWC added.

“The recent tightening of Iranian sanctions by the US administration will raise tension in Iran and cause difficulties for Asian buyers.”

Four tankers were damaged in the attack off Fujairah last week, with Iran fingered as a likely culprit despite denials.

JWC said there is very little information about the explosions and the circumstances and methods employed remain unclear.

“There is no doubt that considerable damage was done and there will be significant claims,” the committee added.

“The JWC has met to review the situation and in the light of further information, has updated the listed areas to reflect the perceived heightened risk across the region. The situation will be kept under close review.”

Norwegian insurers concluded that Iran’s elite Revolutionary Guards were “highly likely” to have facilitated the attacks on the tankers.

Two US government sources said US officials believed Iran had encouraged Yemeni Houthi militants or Iraq-based Shi’ite militias to carry out the attacks. 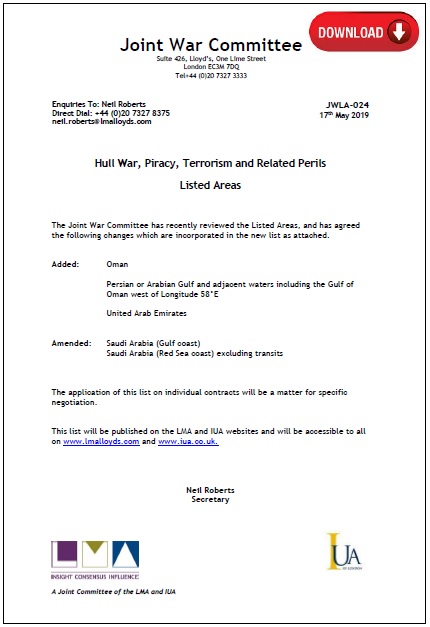