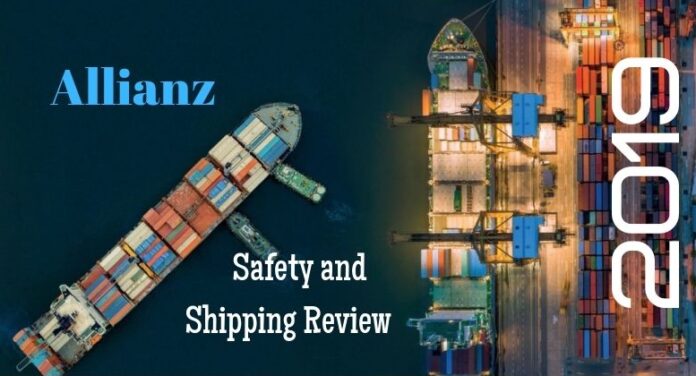 (www.MaritimeCyprus.com) The international shipping industry is responsible for around 90% of world trade. There are around 60,000 merchant ships, transporting every kind of cargo. The world fleet is registered in over 150 nations1, and manned by over a million seafarers, meaning the safety of vessels is critical. The maritime industry saw the number of total shipping losses of vessels over 100GT plummet during 2018 to 46 – the lowest total this century. To put this into context there were 207 total losses reported in 2000.

Shipping losses declined by a record level of more than 50% year-on-year from 98 in 2017, driven by a significant fall in hotspots around the world and weather-related losses halving after a quieter year of hurricane and typhoon activity. The 2018 loss year is exceptional compared with the rolling 10-year loss average of 104 (down by 55%). 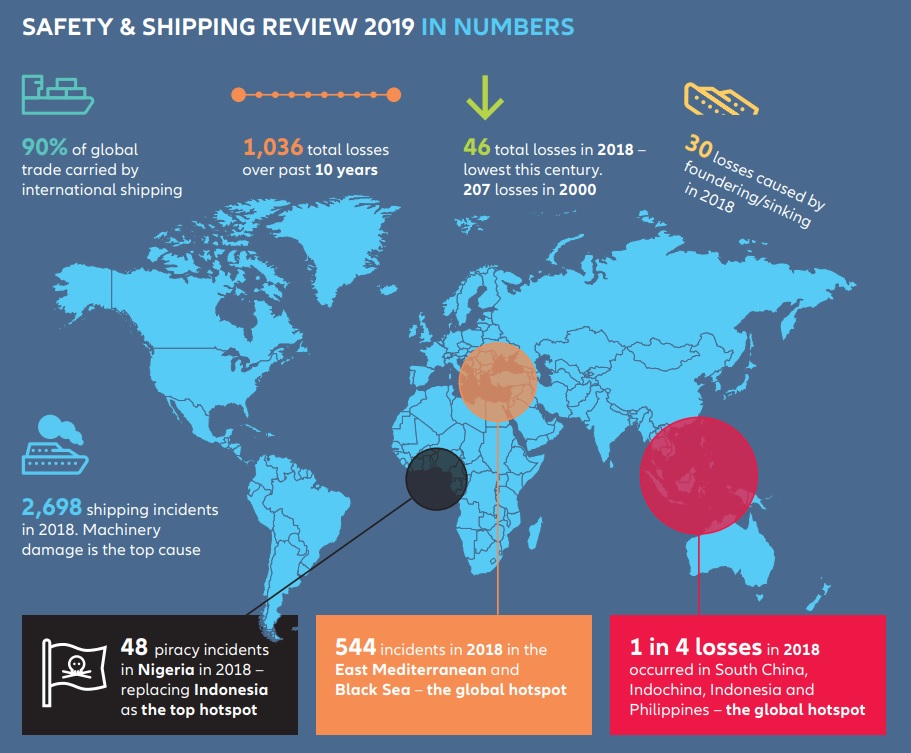 Meanwhile, since 2009, (132), shipping losses have declined by 65%. Improved ship design and technology, stepped-up are typically well run and have claims frequency rates on a par with European counterparts. Newer infrastructure, better port operations and more up-to-date charts will also help to address safety challenges in the region, such as an overall increase in the frequency and cost of collision, grounding and fire incidents in some locations. The East Mediterranean and Black Sea region (6) is the second most frequent loss location.

Cargo vessels (15) were involved in a third of losses during 2018, driven by activity in the top loss hotspots globally. Foundering (sinking) has been the cause of over half of all vessel losses (53%) over the past decade and was the primary cause of 65% of losses (30) in 2018. Analysis of more than 230,000 marine insurance industry claims with a value of almost $10bn between July 2013 and July 2018 by Allianz Global Corporate & Specialty (AGCS) shows that ship sinking/
collision incidents are the most expensive cause of loss for insurers, accounting for 16% of the value of all claims – equivalent to more than $1.5bn. 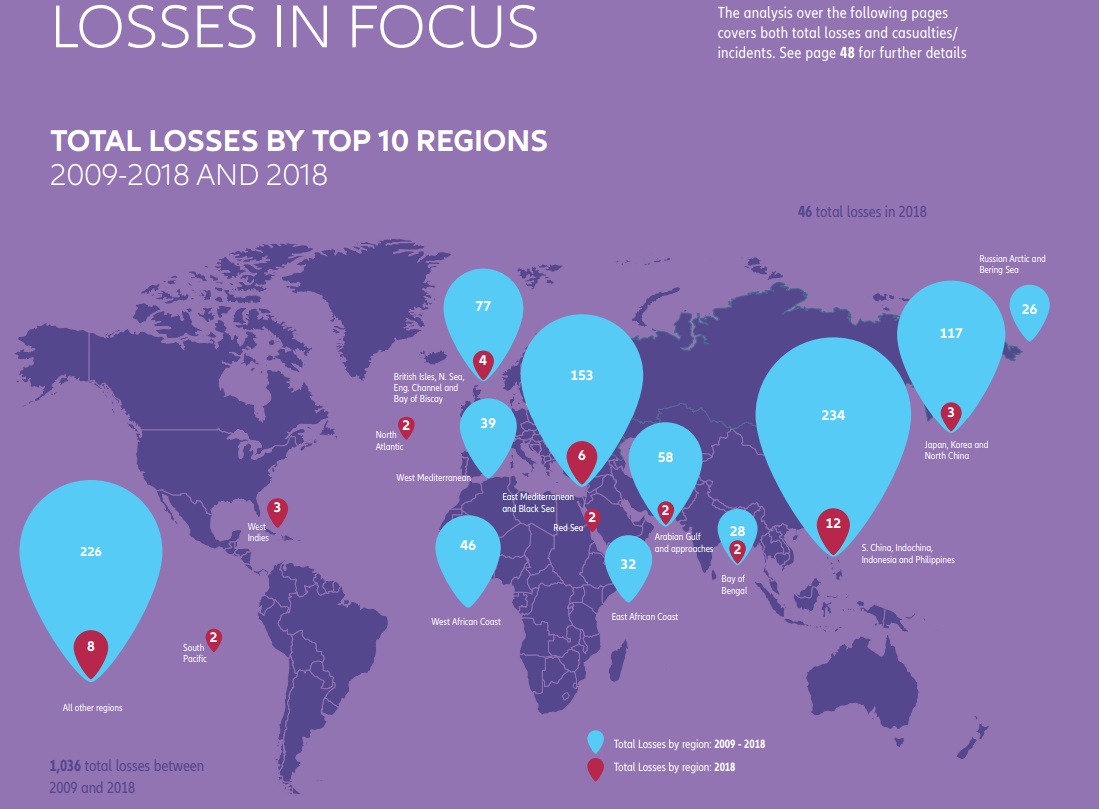 While the number of losses has fallen significantly over the past year in particular, the number of shipping casualties or incidents (2,698) remains challenging, declining by less than 1%. The East Mediterranean and Black Sea is the top incident hotspot, accounting for one in five incidents globally. Activity is up in this region year-on-year, driven by machinery damage/failure incidents, which is also the top cause of shipping incidents globally, accounting for 40% (1,079). 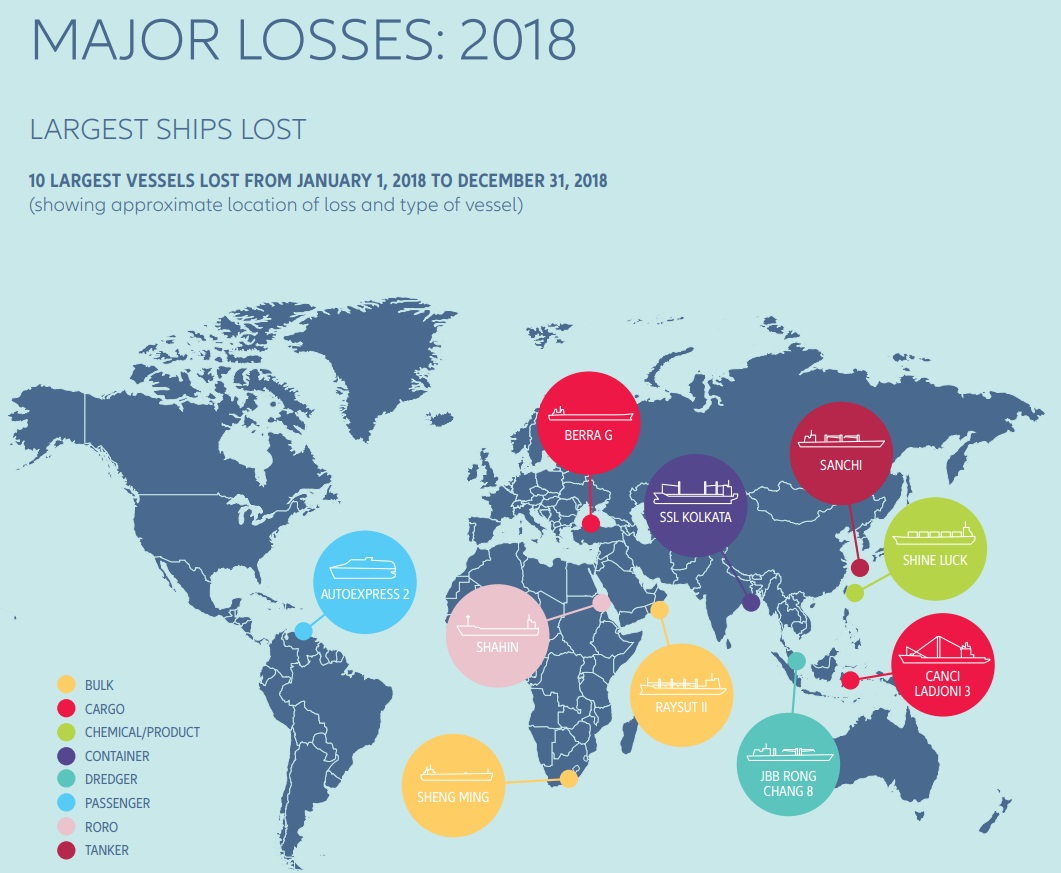 Of the 26,000+ reported shipping incidents over the past decade, more than a third (8,862) have been caused by machinery damage or failure – over twice as many as the next highest cause. Such incidents have increased by a third over the past decade and costs are rising as well. Historically, it is one of the largest causes of marine insurance claims, according to AGCS, causing $1bn+ worth of damage over five years – the third most expensive cause of claims. A growing number of engine manufacturers are now installing “Internet of Things” devices to collect real-time data which can be used to issue recommendations to vessels and carry out maintenance, potentially preventing breakdowns before they happen. 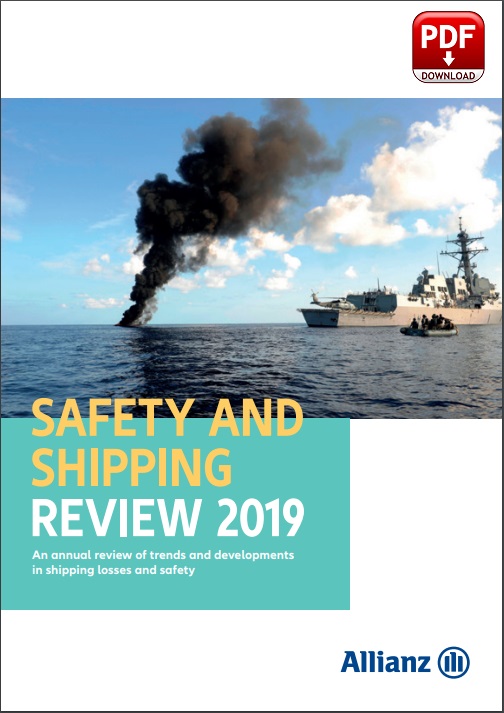