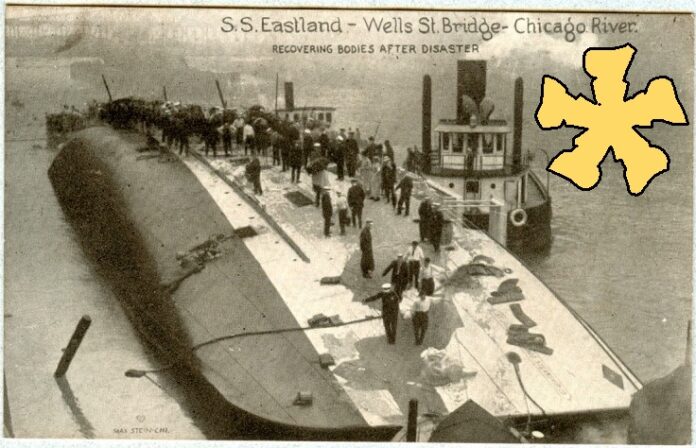 (www.MaritimeCyprus.com) Thousands of horrified onlookers witnessed Chicago’s most deadly disaster on the morning of July 24, 1915. Warehouse workers along the Chicago River shouted, “Look out, she’s tipping!” Suddenly the fully-loaded passenger ship Eastland began her slow roll into infamy, killing 844 of the more than 2,500 passengers.

It began as a leisurely boat ride to a summer picnic across the lake. The Western Electric Company of Hawthorne (now Cicero) had chartered the Eastland and four other boats to take employees to Michigan City, Indiana for a gala day of food, parades and sporting events. Josephine Polivka and her sisters wore white summer dresses as they walked toward the docks. The parents of seven-year-old Willie Novotny dressed their son in a new suit and took a streetcar to the Clark Street dock. George Halas, who would later become one of the founders of the National Football League and coach the Chicago Bears, worked at “The Western” as a summer hire and played on company sports teams.

All were heading toward the Eastland, a slender steamer built for speed.

The luxury steamship called ‘The Greyhound of the Lakes’ also had another reputation: one of being unstable and prone to listing from side to side. Changes in maritime law after the Titanic disaster in 1912 required the Eastland to carry more lifeboats. Steamboat inspectors were persuaded to increase passenger capacity just before the picnic, a way to perhaps make up for a dismal summer of small crowds on the excursion boat. All of this combined to make the Eastland even more top-heavy than before. In the estimation of current U.S. Coast Guard Lt. Commander Eric Christensen, “The Eastland was an accident waiting to happen.”

Chicagoan Gretchen Krohn described the scene dockside: “Up the slippery wet side canvas was spread that those carrying out the bodies might bring out their gruesome freight at a dog trot and thus empty the overturned basketful of human beings more quickly. All of the bodies carried past were so rigid that poles to carry them seemed superfluous. And the pitiful shortness of most of them! Children, and yet more children. And when it wasn’t a child, it was a young girl of 18 or so.”

Agony and ache drew a double line of grieving relatives at the Second Regiment Armory on Sangamon Street. There, hundreds of bodies lay in rows waiting for a relative to reach down, lift a sheet and identify a loved one who had drowned or had been suffocated in the crush of the crowd below decks. Twenty-two entire families were wiped out.

Despite litigation that lasted 20 years, none of the crew served any prison time or paid any fine. Years later, painful memories remained. Rosemary Pietrzak of Cicero said of her great uncle, “Frank never forgot the sight of all those babies floating on the water. He lost his faith in God that day.”

(The Eastland itself was renamed the Wilmette in 1920 and refitted as a naval training vessel, enduring until she was broken up for scrap in 1947.)

Despite the immense loss of life involved, little attention has been given to this story, compared with other disasters of lesser magnitude.