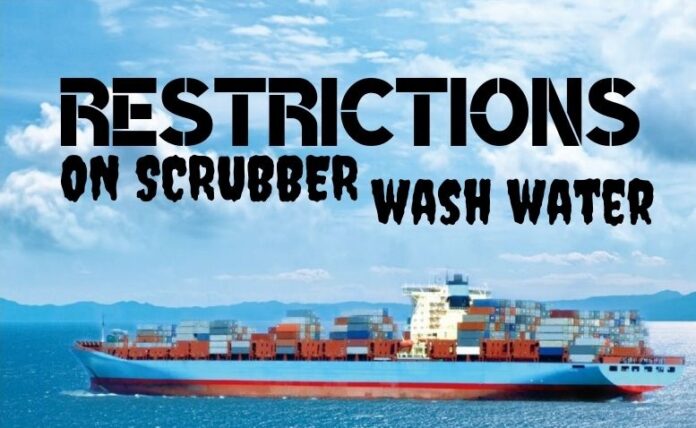 (www.MaritimeCyprus.com) The IMO considers exhaust gas scrubbers to be an acceptable means of reducing vessels’ sulphur emissions and ensuring compliance with MARPOL Annex VI. A separate guideline, Resolution MEPC.259(68), specifies the requirements for the verification, testing, survey and certification of scrubber systems and sets out the criteria for discharging scrubber washwater into the sea.

However, some coastal states and ports have implemented local regulations with more stringent requirements that restrict or completely prohibit the discharge of washwater from open loop scrubbers or prohibit the use of scrubbers. We are currently aware of the following regions/states/ports with local regulations that have an effect on the discharge of exhaust gas scrubber washwater, although the list should not be considered as complete.

China’s Ministry of Transport (MOT) issued its ‘Notice on Regulating the Implementation of Supervision and Management of Ship Air Pollutant Emission Control Areas’ which states that from 1 January 2019 discharge of washwater from scrubbers is prohibited in the county’s inland emission control areas (ECAs), port water areas of coastal domestic ECAs and Bohai Bay waters. The document also states that a ban in the entire coastal domestic ECA will be announced in due course. Our local correspondent, Huatai, has published a useful circular on China’s ban on scrubber washwater discharge, which can be accessed here. China MOT recently circulated a draft recommending that the ban on the discharge of washwater be extended to within 12nm of all coastal areas and regions near the southern island province of Hainan.

According to the Maritime and Port Authority of Singapore (MPA), discharge is prohibited in Singapore port waters from 1 January 2020. MPA has published useful guidance on IMO’s 2020 Sulphur limits which can be accessed here. The document advises ships fitted with open loop scrubbers to ‘carry out the switch to either closed-loop mode or to compliant fuel well in advance of the vessel’s arrival at the port waters’. Residues from scrubbers have been classified as toxic industrial waste under Singapore’s  Environmental Public Health (Toxic Industrial Waste) Regulations. It can only be collected by licensed Toxic Industrial Waste Collectors.

In DG Engineering Circular 05 of 2018, India seems to indicate that scrubber washwater discharges are allowed if the criteria set out in MEPC.259(68) are met. However, this is qualified with a requirement that local regulations should also be followed. As of now, it is not clear if local restrictions will be imposed in some areas.

Abu Dhabi: In 2013 Abu Dhabi authorities issued ‘Vessel Discharge and Maintenance Guidelines For Owners, Masters And Agents’. It states that scrubber washwater can be discharged in port waters if free form pollutants whilst scrubber sludge should be discharged from the vessel to an Abu Dhabi Ports Company (ADPC) licensed waste disposal contractor.

Fujairah: As per notice to mariners no. 252, Harbour Master of Fujairah has announced that use of open loop scrubbers will be banned in port waters. The circular can be found here.

Discharge is not allowed in inland waterways and the Rhine, pursuant to Articles 1 and 3 of the CDNI Convention (Convention on the Collection, Deposit and Reception of Waste Produced during Navigation on the Rhine and Inland Waterways).

The authorities are currently studying the impact of scrubber washwater on the marine environment and will provide its conclusions upon completion of the study. Meanwhile, the current position seems to be that discharge is not allowed in port waters, according to port rules and conditions of use approved by the Ministry of Transport. Reference is made to the European Commission’s 2016 note on discharge of scrubber washwater.

Dublin: The Irish authorities’ Notice No. 37 of 2018 ‘Prohibition on the Discharge of Exhaust Gas Scrubber Wash Water’ stipulates that discharge of washwater is prohibited in waters under Dublin port jurisdiction. Dublin port jurisdiction includes waters from the Matt Talbot Memorial Bridge eastwards to a line from the Baily Lighthouse through the North and South Burford buoys and through Sorrento Point.

Waterford: As per Port of Waterford’s marine notice ‘Prohibition on the Discharge of Exhaust Gas Scrubber Wash Water’, discharge of scrubber washwater is prohibited in port limits from the start of January 2019.

Cork: Port notice No. 15 of 2018 states that given the potential for impact on sensitive ecosystems, and the abundance of Natura 2000 sites within the jurisdiction of the port company, discharge of scrubber washwater is prohibited in port waters.

Under the amendments of 1 March 2019 to Regulation No.488 on the environmental safety of ships and mobile offshore units, use of open loop scrubbers is prohibited in the Norwegian fjords. Also, for ships using closed or hybrid type scrubbers, a device for reducing visible emissions to air is required.

Conditional section 401 WQC (Water Quality Certification) as mentioned in section 6.7 of 2013 VGP allows for discharge of washwhater subject to certain requirements being fulfilled. These requirements can be found in the same section.

Connecticut has laid down specific conditions as part of the 2013 Vessel General Permit (VGP) requirements. In accordance with section 6.5.9[UK1]  of the 2013 VGP, discharge of exhaust gas scrubber washwater into Connecticut waters from any vessel covered under the VGP is prohibited. Please see CGS section 22a-427, and Connecticut Water Quality Standards (CT WQS).

The CARB OGV (California Air Resource Board for Ocean Going Vessels) regulations do not permit the use of abatement technologies such as scrubbers, hence their use as well as any discharge of washwater is prohibited. Vessel discharge regulations for Port of Long Beach also state that it is prohibited to discharge washwater from scrubbers in port waters. However, pursuant to CARB’s Marine Notice 2017-1 discharge is permitted if the vessel has an experimental or temporary research permit.

As of today, bans on the discharge of washwater from open loop scrubbers have not been imposed by any state. This is indicated in the summary of the 6th roundtable discussion hosted by AMSA and MIAL. It is stated that authorities are currently looking at the impact of scrubber discharges.

In marine notice no. 08 of 2019 South Africa has indicated that it accepts all types of approved scrubbers including open loop scrubbers as long as the IMO discharge criteria set  out in Resolution MEPC.259(68) is met. However, recent reports indicate that South Africa may reconsider its position on the acceptance of open loop scrubbers. A decision is expected in September 2019.

Various other coastal states and ports are discussing enforcing similar bans citing the adverse effects of scrubber washwater on the marine environment. It is therefore likely that the above list of states/ports which currently regulate open loop scrubber discharges in their waters will grow over time. In those areas where the discharge of washwater is not permitted, vessel operators have two options to choose from to ensure compliance with the sulphur limits:

Any changeover should be carried out well in advance of the vessel entering the areas with prohibition or restrictions in place. This will help in identifying operational issues, if any, after the changeover, and will allow for sufficient time to rectify such before the vessel enters the area.

Potential impact of scrubber wash water on the marine environment

The table below shows the potential impact of scrubber wash water on the marine environment. Next to the low pH that will contribute to further acidification of the oceans and algae growth, heavy metals and arsenic are, among other pollutants, discharged into the sea.
A recent study from M. Koski, Stedman and Trapp from 2017 “Ecological effects of scrubber water discharge on coastal plankton: potential synergistic effects of contaminants reduce survival and feeding of the copepod Acartia tonsa” comes to the same conclusion. 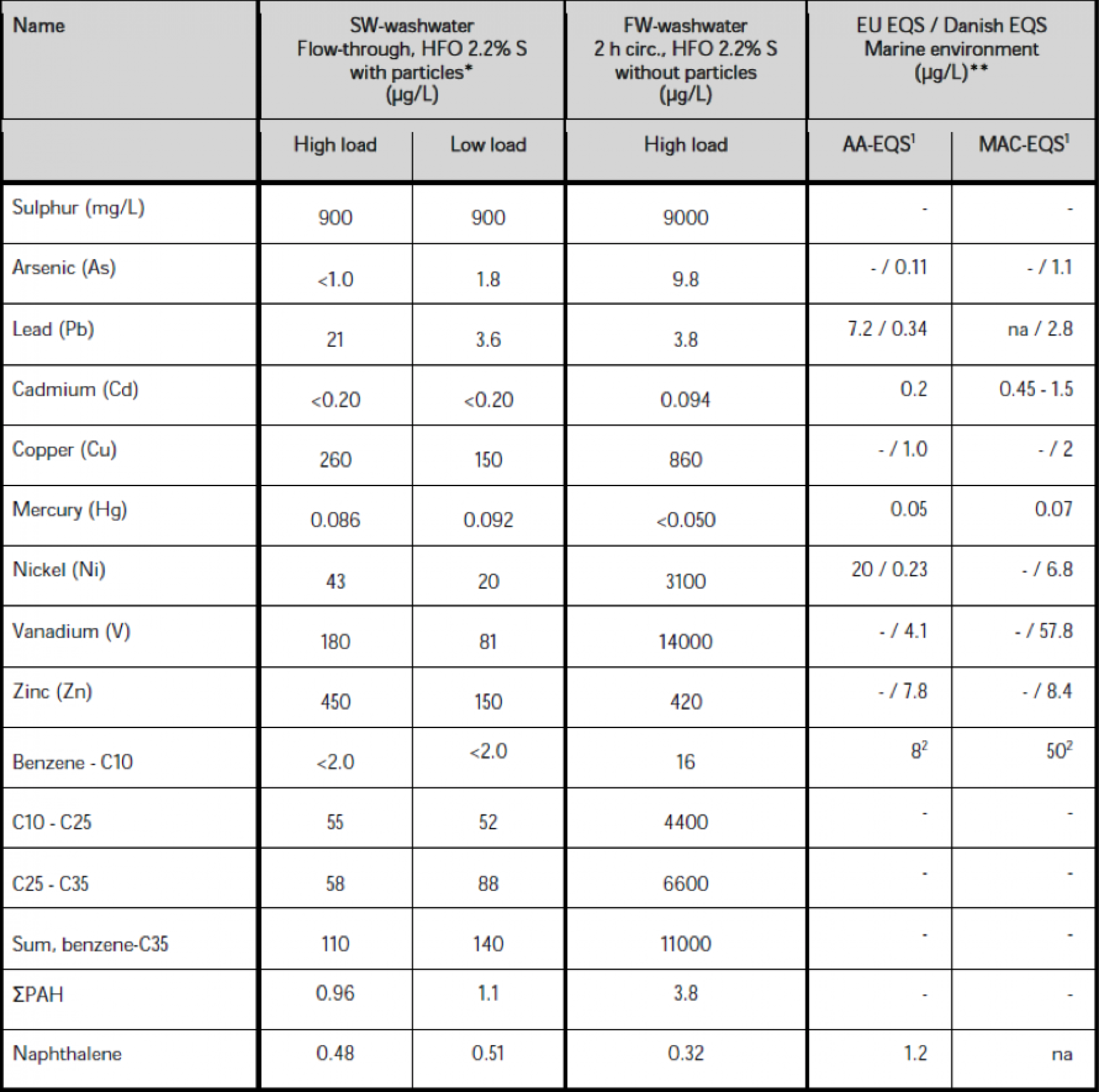