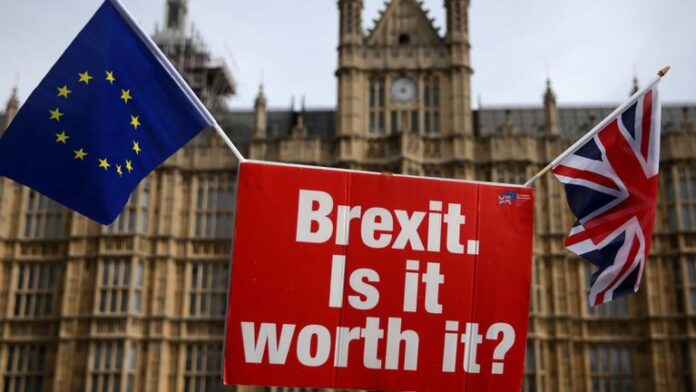 (www.MaritimeCyprus.com) As a member of the European Union (EU), the United Kingdom (UK) is part of about 40 trade agreements through which EU members enjoy preferential market access in about 70 countries.

In the event  of a no-deal Brexit, and in the absence of replacement agreements (rollover deals), the UK would abruptly lose preferential access to these markets and, by default, would have to export under World Trade Organization Most Favoured Nation (MFN) tariffs.

While the UK has already managed to roll over a number of such agreements, negotiations for many others are still ongoing.

If these agreements are not concluded before their exit from the EU, Brexit could cost the UK billions in export earnings in key markets.

As of 2018,  UK merchandise exports were valued at approximately USD $450 billion. The EU is the UK’s most significant trading partner and accounts for approximately half of UK’s merchandise exports., exports to the EU accounted for approximately half of this figure. Our calculations indicate that a loss of preferences in the EU market consequent to a no-deal Brexit will result in UK export losses of at least USD$16 billion  (representing a loss of approximately 7 percent of overall UK exports to the EU). This is a conservative estimate that only takes into account the increase in tariffs from zero to current EU MFN levels. In reality, the losses would be much greater because of non-tariff measures, border controls and  disruption of existing UK-EU production networks.

Some sectors would be affected substantially more than others (Figure 5). The UK exports to the EU could face significantly higher tariffs in several sectors not only agricultural (animal and vegetable products) but also manufacturing sectors (processed food products, apparel, leather products, and motor vehicles). In numbers, most of the losses would be concentrated in motor vehicles (5 billion USD), animal products (2 billion USD) and apparel and textiles (encompassing about 2 billion USD). These figures represent the minimum export losses for the UK in the EU market.

For the UK’s remaining export markets, a substantial share was exported to countries which do not give preferential access to the EU (e.g. China and USA) and therefore are not affected by the potential loss of preferential market access due to Brexit. Of relevance in the Brexit context are about 17 percent of the UK exports which are to countries that currently grant preferences to the EU. With this in consideration, these exports are among the most at risk for the UK in  a no-deal Brexit scenario. While the UK has already secured the continuation of preferential market access conditions in several countries through roll-over trade deals, there remain almost 10 percent of exports for which the UK risks facing higher tariffs due to roll-over trade deals that are not yet signed (Figure 1).[1] The tariffs imposed on UK exports in these markets could jump from a current average of about 0.5 percent to about 3.5 percent.[2] The effect of a no-deal Brexit on UK exports can be estimated by using import demand elasticities. These elasticities can be used to measure the amount of trade loss from a change in tariffs (from preferential to MFN). The results below are based on an analysis made in a partial equilibrium setting at the HS6 digit level of detail.

Figure 3: Potential losses because of not yet agreed roll-over deals 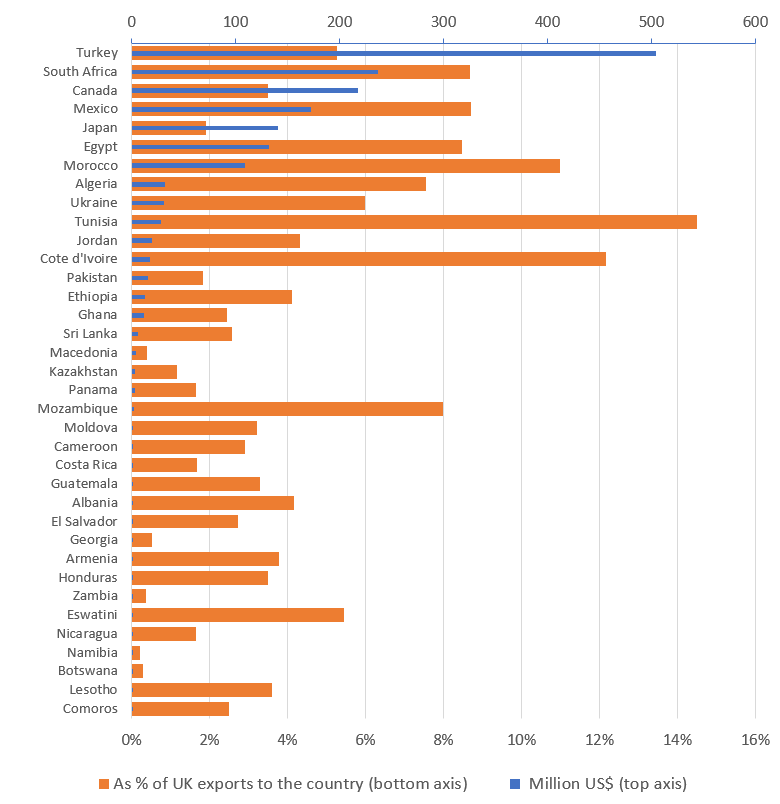 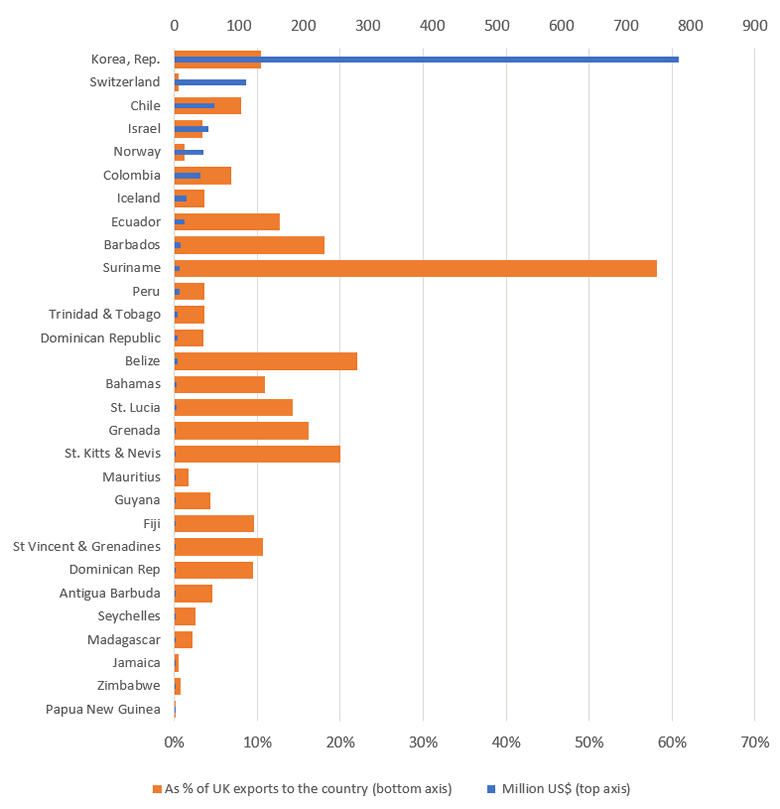 The losses detailed in Figure 2 could be avoided if the parties agree on rolling over reciprocal market access conditions. Indeed, the UK has already agreed with several other countries to continue preferential schemes, and therefore has already avoided some substantial losses. In one example, the recently concluded agreement with the Republic of Korea avoided export losses in the sum of USD$800 million (Figure 3).

Due to the varying  MFN tariffs and export compositions, the consequences of Brexit would differ not only across trading partners as shown above but also across products (Figure 4). In relation to exports to countries with which the UK has not yet secured the continuation of preferential access, the UK could face substantially higher MFN tariffs, especially on agricultural products. For example, processed food products could face an average increase in tariffs of about 17 percent. Similarly, apparel, textiles and motor vehicles would also face substantially higher tariffs. In value, most of the losses would be concentrated in motor vehicles (about USD$750 million) and in chemicals (USD$200 million).

Figure 5: Potential losses in countries with roll-over trade deals not yet in place

Overall it is clear that while the UK has managed to secure preferential access to some important countries, there are still several important markets where agreements would not be likely be concluded in case of a sudden no-deal Brexit. In these markets, the tariffs  faced would be substantially higher, especially for agricultural exports. Still the largest losses for UK exports in term of values are likely to happen in the manufacturing sectors. Processed food products, chemicals, leather products, motor vehicles, textiles and apparel would experience the highest losses. Trade in these sectors is very competitive and increases in tariffs would result in substantial export losses.

Finally, besides the existing EU agreements, trade agreements that the EU is currently negotiating with other countries should be also of concern for UK exporters. In particular, the EU is currently concluding trade agreements with important partners such as Vietnam and MERCOSUR countries (Argentina, Brazil, Paraguay and Uruguay). When these agreements are implemented, if not matched by equivalent agreements with the UK, they would likely erode competitiveness of UK firms in these markets vis-à-vis EU competitors.