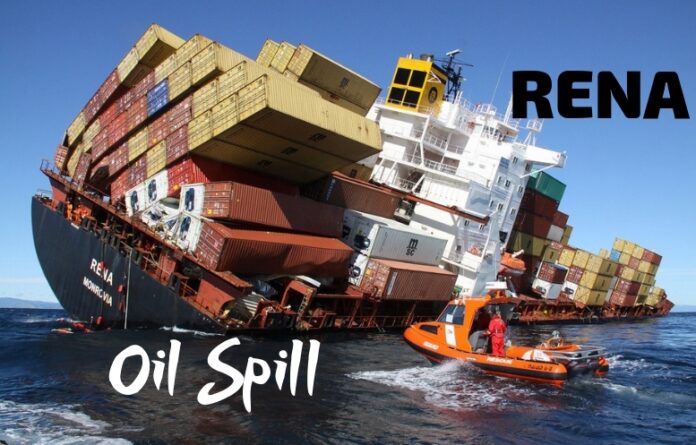 (www.MaritimeCyprus.com) On October 5, 2011, an oil spill began off the coast of New Zealand that would become what many describe as the country's worst maritime environmental disaster.

When the MV Rena container ship (owned by Greek shipping company Costamare Inc.) ran aground on Astrolabe Reef 12 miles off the coast of New Zealand's North Island, a leak of fuel and diesel oil eventually spilled 93,000 gallons into the Bay of Plenty.

The disaster killed thousands of birds, with some death estimates as high as 20,000. Some species, such as the New Zealand dotterels, were preemptively captured and sequestered for their own survival. Some dotterels weren't so lucky; a number died of respiratory infections due to the spill.

Many local residents disregarded orders from the goverment and began to organize cleanup efforts. Five thousand volunteers were involved in cleaning the bay's shoreline.

Although signs of the ship splitting in two were reported as early as Oct. 12, the Rena eventually broke apart in January. More oil was found leaking from the wreckage, but it is unknown how much more leaked into the ocean. One slick from this secondary spill stretched over one square kilometer of water.

On May 25, Captain Mauro Balomaga and his navigation officer, Leonil Relon, were found guilty of operating the ship in a dangerous manner as well as changing navigation records in order to mislead investigators. They were both sentenced to seven months.

The Rena's second mate took over the watch shortly after midnight on 4 October. He calculated that the Rena would arrive at the port of Tauranga pilot station at 0300 at the ship's then current speed. Times for ships entering and leaving Tauranga Harbour are limited by the depth of water and the strength of the tidal currents in the entrance channel. Tauranga Harbour Control informed the second mate that the latest time the Rena could take the harbour pilot on board was 0300.

Watch the documentary from Euronews below: