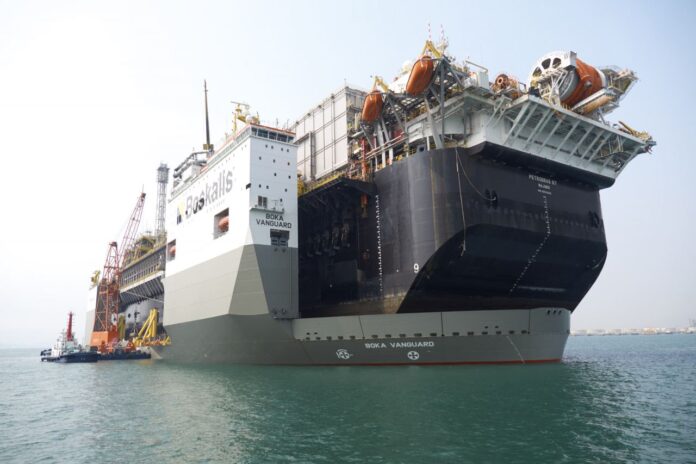 (www.MaritimeCyprus.com) South African rescue agencies responded to a request for assistance from the heavy lift ship BOKA Vanguard, which reported a fatal accident and several other health complications on board.

Boskalis heavy lift ship BOKA VANGUARD interrupted her voyage from China to Brazil with offshore processing ship PETROBRAS 70 on board, and approached Durban South Africa, on Jan 7, requesting immediate medical assistance to 5 Brazilian seamen, understood of PETROBRAS 70 crew, who were injured in an accident, details of accident remain unknown. One more crew suffered fatal injures and died, his body remained on board of the ship. 5 injured crew, one in critical condition, were evacuated by South Africa Sea Rescue NSRI organizations and Air Force helicopters, operation was coordinated by MRCC South Africa.

MRCC arranged for an EMS duty doctor to provide medical advice to the ship’s medics while the ship diverted towards Durban and closed the distance to shore. A South African  Air Force helicopter was tasked to reposition to Durban from Port Elizabeth.

At 1640 hours, the sea rescue boat Alick Rennie launched from the NSRI Durban station with two paramedics on board. The Rennie was tasked to stand by near the Vanguard during a helicopter medevac in case more assistance was needed.

At 1730 hours, both helicopters departed to rendezvous with the ship. Upon meeting the Vanguard at a position about 28 nm off the coast of Durban, the Oryx landed on the helicopter pad on the Vanguard's cargo, a giant FPSO.

The second helicopter and the Alick Rennie stood by while paramedics provided care for the five patients and transferred them to the Oryx. At the master's request, the body of the deceased Brazilian national remained on board the ship.

At the time of the medevac, one of the patients was in critical condition and four were stable. Medical treatment continued during the airlift back to a hospital in Durban. According to the NSRI's Kellerman, all five patients are now in stable condition and they are recovering in the hospital.

According to Brazilian news outlet Globo, Petrobras has identified the cause of the illness as ethyl alcohol ingestion.

Boskalis confirmed the remaining five affected persons were successfully evacuated, hospitalized in Durban, South Africa and are now successfully recovering from the intoxication. The firm expressed its “deepest condolences” to the family of the deceased worker.

But it added that Boskalis has a “strict zero tolerance policy” with regard to the ingestion of alcohol on its offshore vessels.

The BOKA Vanguard is the largest semisubmersible vessel of her class. She is perhaps best known for her role in assisting with repairs to the cruise ship Carnival Vista after a drydock failure at a Caribbean shipyard last year.

In November, Boskalis signed a contract to transport a 91,000 ton FPSO from China to Brazil aboard the BOKA Vanguard, marking a new record for the ship. Brazilian media have identified her cargo as the brand new Petrobras FPSO P-70, which will be installed at an oil field in the offshore Santos Basin.