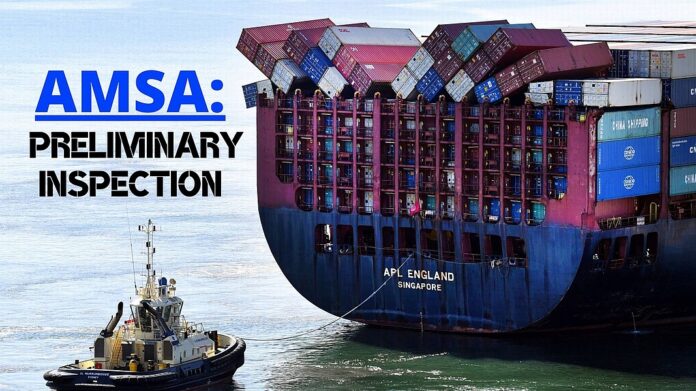 (www.MaritimeCyprus.com) A preliminary inspection of troubled cargo ship APL England, which lost 40 containers in rough seas off the NSW coast, has unearthed a major defect and serious concerns with how the load was secured.

Australia Maritime Safety Authority (AMSA) inspectors found lashing arrangements were inadequate and securing points on the deck of the ship were heavily corroded.

ASMA general manager of operations Allan Schwartz said the inspection was continuing but the findings so far were in breach of maritime safety regulations.

He said the ship has been detained at the Port of Brisbane where it docked on Wednesday.

"The detention will not be lifted until these serious deficiencies are rectified. That is now a matter for the ship's owner, American President Lines (APL), and operator to rectify," he said."These findings will form part of AMSA's ongoing investigation and, while we do not want to pre-empt the outcomes of that investigation, it is already clear that the risk of this container loss occurring could have been reduced."

Mr Schwartz said the ship's owner and its insurer, Steamship Mutual, should take responsibility for remediating any impacts of this incident.

Some 40 containers went overboard on Sunday when the ship struck rough seas while about 70 other containers were displaced, forcing the vessel - which was en route from China to Melbourne - to dock in Brisbane.

ANL, the operator of APL England, said the vessel was berthed safely and its cargo would be discharged on Friday morning.

ANL said it is cooperating with all investigators while a clean-up operation was underway and none of the containers that tumbled into the ocean contained dangerous cargo.

"The contractor has been removing surface debris on NSW shorelines since yesterday," the company said on Thursday.

"Containers that have been reported on beaches and floating at sea will be removed as a matter of priority. Floating containers will be towed back to land where they will be removed."

AMSA general manager of response representative Mark Morrow said the agency will raise concerns about the ship with international authorities.

In 2016, the APL England, under different owners, lost 37 containers in rough seas in the Great Australian Bight.