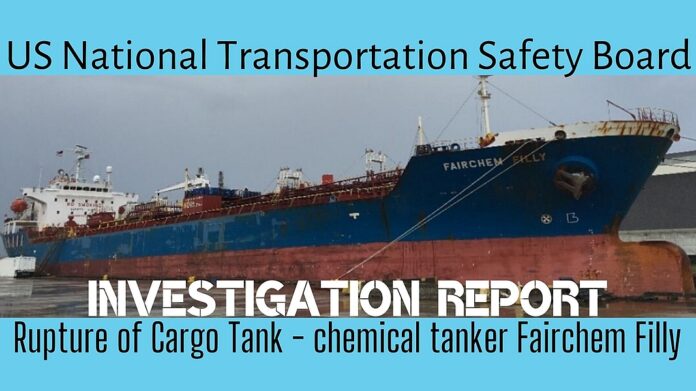 (www.MaritimeCyprus.com) The US National Transportation Safety Board (NTSB) issued the report of its investigation of the 30 May 2019 incident involving the chemical tanker Fairchem Filly.

The tanker experienced an overpressurization of the number 3 port and starboard cargo tanks while discharging liquid hexene at Vopak Terminal in Deer Park, Texas.

The overpressurization resulted in damage to the number 3 port cargo tank and the tank top (deck). All cargo was contained on board the double-hulled vessel, with no pollution or injuries reported.

Damage to the tankerÂ was estimated at $750,000, and the contaminated cargo was an estimated $100,000 loss.Â The probable cause of the overpressurization and rupture of the 3P cargo tank aboard the tankerÂ during offloading was the vessel and terminal personnel involved not following policies and procedures related to cargo discharge and nitrogen-blanketing operations.

Contributing to the casualty was the lack of effective communication between the vessel and terminal personnel and the decision of the vesselâ€™s PIC to continue discharge operations after being unable to communicate with the terminal.