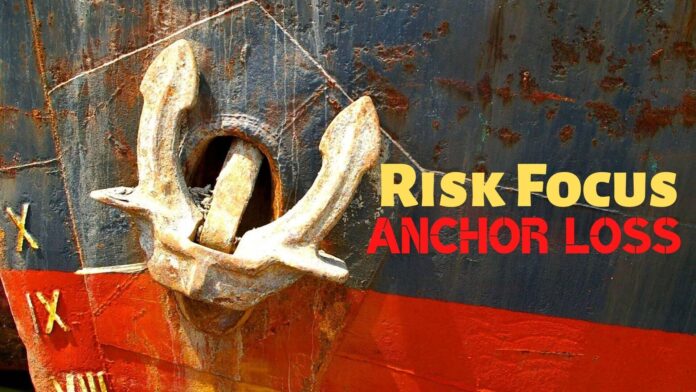 (www.MaritimeCyprus.com) The root cause of many groundings and collisions, lost anchors are among the top five reasons for claims costs. Anchor and chain loss can often lead to collisions and grounding, which can result in additional damage to a vessel. Adding to the costs of anchor loss is the increasingly common requirement from port authorities that lost anchors are recovered.

A growing number of anchor losses reported in recent years prompted authorities to investigate this issue further. Based on an analysis of cases involving anchor and anchor chain losses, the project partners have issued a video and a presentation identifying the most frequent technical and operational causes, and steps crews and operators can take to address them.

Most anchor losses are preventable if proper maintenance and handling procedures are followed. One of the key findings of this investigation is the importance of the officers and crew being aware of the environmental loads their equipment is designed for.

Lack of awareness of the classification societiesâ€™ limitations imposed whenÂ the anchoring equipmentÂ was approved was a frequent cause. If these limits are not taken into account during shipboard anchoring operations, there can be significant damage to the vessel â€“ even beyond the loss of anchor and chain.

In almost half of the cases, we saw that environmental risk factors, such as weather, strength of the currents and water depth, played a significant role in the loss. Another common cause was the crewâ€™s lack of expertise and training in the handling of anchoring equipment, including maintenance of the utmost important windlass breaks and the securing of the anchors and chains.

There were also a number of instances where technical or equipment failures, such as heavily worn brake band linings; corrosion of chain links; spile pins of D-shackles falling out as not being correctly secured; problems of chain stoppers and tensioning devices etc., were among the causes.

Mitigating the safety risks associated with anchoring operations is paramount in an industry that has been striving to eliminate personnel injuries, prevent harm to the environment and limit damage to equipment. INTERTANKO has issued an excellent Risk-Based approach Guide paper on Anchoring which can be downloaded HERE.

Watch below interesting guidance video on the subject: