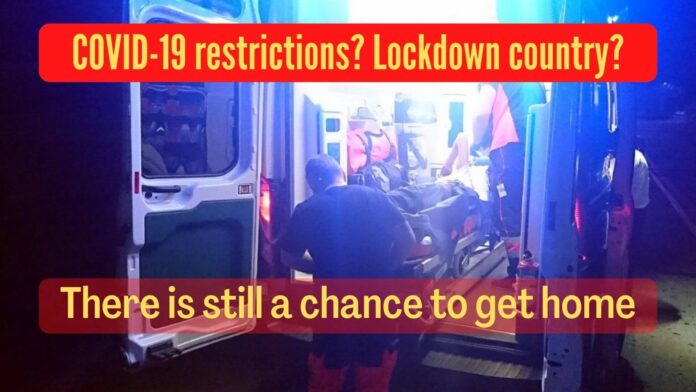 (www.MaritimeCyprus.com) A seriously ill seafarer was evacuated by a dedicated air ambulance jet from Angola after several unsuccessful attempts.

The evacuation was organized by Global Voyager Assistance Black Sea, the representatives of the company Etic Sas Africa P&I Services and the medical staff of the Sagrada Esperança clinic in Luanda. There were a lot of difficulties in this repatriation due to the health reasons of a Ukrainian seafarer, as well as because of the closed border of Angola due to the COVID-19 pandemic. But the hard work by the assistance team of GVA and its partners with numerous Angolan and Ukrainian administrations made the mission possible.

“After two unsuccessful attempts to evacuate a seriously ill Ukrainian seafarer from Luanda by humanitarian flights of the airlines TAAG and Air France, on August 18, 2020 the Ukrainian Embassy in Angola managed to repatriate a seriously ill citizen of Ukraine with a special medical flight provided by Global Voyager Assistance Black Sea, as well with the help and active participation of the company Etic Sas Africa P&I Services and the medical staff of the Sagrada Esperança clinic in Luanda,” – is stated in the press release by The Embassy of Ukraine in Angola.

Throughout the entire evacuation, the seafarer was accompanied by the doctor. He was delivered by the ambulance car directly to the plane and also was taken directly to the hospital after landing in Ukraine.

The Embassy of Ukraine in Angola expressed gratitude “to the competent Angolan authorities for the promptness of actions in organizing the granting of permission for the arrival of the special medical sailor as well as the companies Global Voyager Assistance Black Sea, Etic Sas Africa P & I Services and Sagrada Esperança clinic for their significant work”.