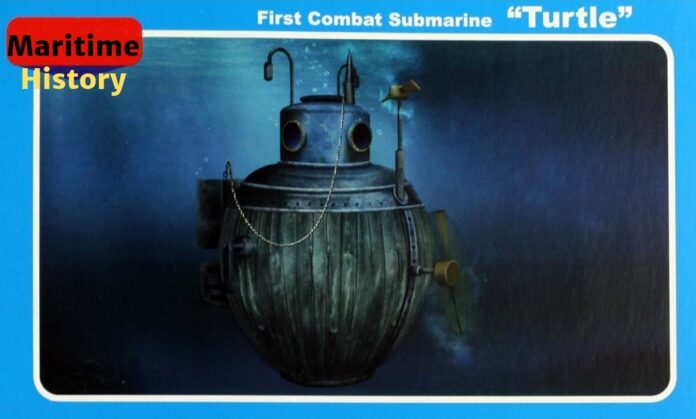 (www.MaritimeCyprus.com) On the 6th Sept. 1776, during the US Revolutionary War, the American submersible craft Turtle attempts to attach a time bomb to the hull of British Admiral Richard Howe’s flagship Eagle in New York Harbor. It was the first use of a submarine in warfare.

Submarines were first built by Dutch inventor Cornelius van Drebel in the early 17th century, but it was not until 150 years later that they were first used in naval combat. David Bushnell, an American inventor, began building underwater mines while a student at Yale University. Deciding that a submarine would be the best means of delivering his mines in warfare, he built an eight-foot-long wooden submersible that was christened the Turtle for its shape. Large enough to accommodate one operator, the submarine was entirely hand-powered. Lead ballast kept the craft balanced.

Donated to the Patriot cause after the outbreak of war with Britain in 1775, Ezra Lee piloted the craft unnoticed out to the 64-gun HMS Eagle in New York Harbor on September 7, 1776. As Lee worked to anchor a time bomb to the hull, he could see British seamen on the deck above, but they failed to notice the strange craft below the surface. Lee had almost secured the bomb when his boring tools failed to penetrate a layer of iron sheathing. He retreated, and the bomb exploded nearby, causing no harm to either the Eagle or the Turtle.

During the next week, the Turtle made several more attempts to sink British ships on the Hudson River, but each time it failed, owing to the operator’s lack of skill. Only Bushnell was really able to competently execute the submarine’s complicated functions, but because of his physical frailty he was unable to pilot the Turtle in any of its combat missions. During the Battle of Fort Lee, the Turtle was lost when the American sloop transporting it was sunk by the British.

Despite the failures of the Turtle, General George Washington gave Bushnell a commission as an Army engineer, and the drifting mines he constructed destroyed the British frigate Cereberus and wreaked havoc against other British ships. After the war, he became commander of the U.S. Army Corps of Engineers stationed at West Point.