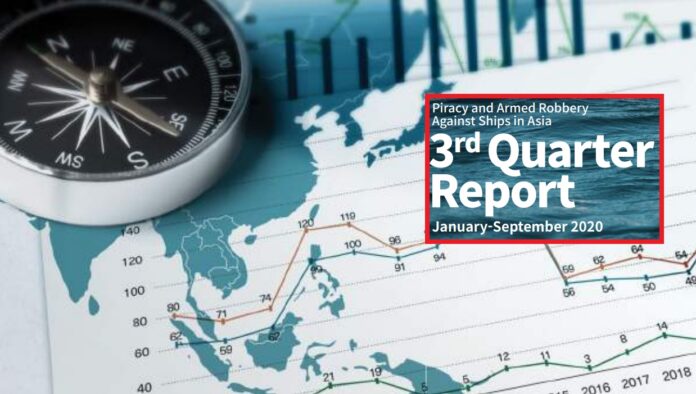 (www.MaritimeCyprus.com) The Regional Cooperation Agreement on Combating Piracy and Armed Robbery against Ships in Asia (ReCAAP) has released its statistics on piracy and sea robbery in Asia for January-September this year.

This accounts for an increase of 39% in the total number of incidents reported during January-September 2020 compared to the same period in 2019.

Of the 75 incidents, 71 were incidents of armed robbery against ships and four were piracy incidents. The increase of incidents during January-September 2020 occurred in Bangladesh, India, Indonesia, the Philippines, Vietnam, South China Sea and Singapore Strait. However, there was an improvement at the ports/anchorages in China and Malaysia during January-September 2020 compared to the same period in 2019.

Of concern was the continued increase of incidents onboard ships while underway in the Singapore Strait during January-September 2020 with 22 incidents, compared to 15 incidents during the same period in 2019.

The situation of the abduction of crew in the Sulu-Celebes Seas and waters off Eastern Sabah remains a serious concern as demonstrated by the abduction incident on a fishing trawler on 17 Jan 20 off Lahad Datu, Sabah, Malaysia where five crew were abducted; and information of planned kidnapping by members of the Abu Sayyaf Group in Sabah and Semporna, Malaysia targeting ships passing by Tawi-Tawi and Sabah waters.

On 29 Sep 20, the body of one of the five abducted crew from the fishing trawler was found during a military operation in Patikul, Sulu. Four crew are still held in captivity. Shipping companies are advised to follow the ReCAAP ISCâ€™s â€˜Guidance on Abduction of Crew in the Sulu-Celebes Seas and Waters off Eastern Sabahâ€™ and maintain communication with the Operation Centres of the Philippines and Eastern Sabah Security Command (ESSCOM) of Malaysia.

Also of concern was the increase of the number of incidents at Manila and Batangasanchor ages/ports in the Philippines during January-September 2020 compared to the same period in 2019. The ReCAAP ISC has published a Special Report consisting of an Advisory on the measures to be taken by ship anchored/berthed in the area, and the contact details of the local authorities.

In view of the increase of incidents in the locations as indicated in this Report, the ReCAAP ISC reiterates the need for law enforcement agencies to enhance surveillance, increase patrols and respond promptly to incidents reported by ships in order to arrest and prosecute the perpetrators. Shipmasters and crew are strongly advised to exercise vigilance, maintain a constant lookout for suspicious boats in the vicinity, report all incidents immediately to the nearest coastal State, and implement preventive measures recommended in the â€˜Regional Guide to Counter Piracy and Armed Robbery Against Ships in Asiaâ€™.