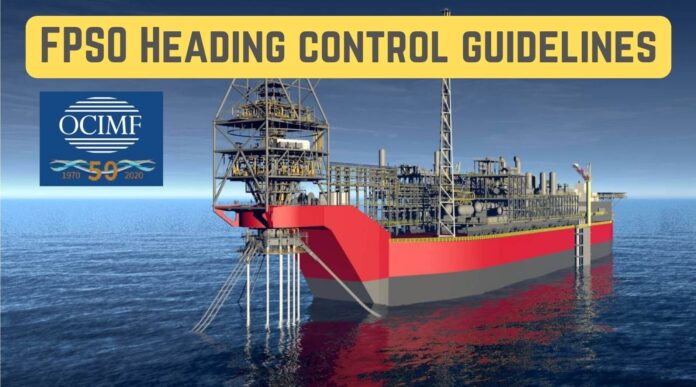 FPSO heading control operations are undertaken to enable surveys, installation works, maintenance works, and associated FPSO operations, often while the facility remains in operation, and are exposed to a wide range of hazards.

The bollard pull that is required to maintain a defined heading is often underestimated.
An underestimated bollard pull may lead to an unwanted loss of position of the F(P)SO,
subsequently endangering operations that require the heading control. Additionally, insufficient consideration has been given to the operational limits at which operations should be suspended or aborted.

Incidents during heading control operations have shown that personnel has insufficient
awareness of the risk associated with the operations. For example, the relationships between field water depth, subsea assets and towline catenary depth are not fully understood. To improve the management of heading control operations, these guidelines include an assurance tool and a standard methodology to calculate the bollard pull requirements for Heading Control Tugs (HCTs).

The methodology used to calculate the required bollard pull has been developed in close
cooperation with the Maritime Research Institute Netherlands (MARIN). Suitability and redundancy of FPSO mooring equipment become increasingly important when the consequences from a loss of heading control increase in severity. F(P)SO mooring equipment may not always be suitable nor redundant for the assigned tasks.

Recommendations for FPSO deck equipment to be used during heading control operations are included in these guidelines.

Where FPSO facilities have thrusters, guidance for their use, whether stand-alone or in combination with one or more HCTs, is provided.

The suitability of the HCTs selected forms an important part of the operations. Redundancy guidance includes the use of two tugs with single engines versus one tug with dual engines.
With many parties involved in the operations, communication protocols should be documented and followed.

FPSO deck crew line handling training, competency, and experience is critical to safe operations. This is especially important when connecting and disconnecting tug towlines to the FPSO, and specifically in adverse environmental operating conditions, when operational limits are not defined.

Finally, it is recommended that the scope of personnel competence assessment activities be undertaken in line with the OCIMF Competence Assurance Guidelines for FPSOs.