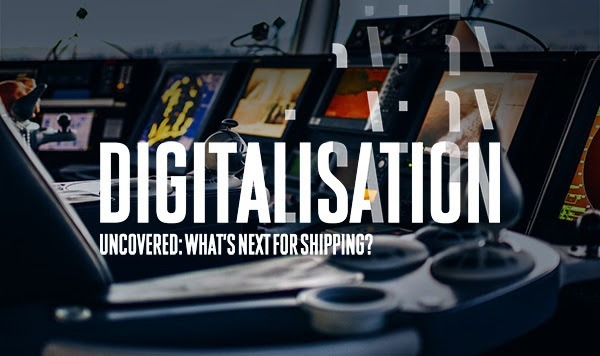 (www.MaritimeCyprus.com) A great initiative from Inmarsat, Digitalisation Uncovered captures insights from shipowners and ship managers in a period of technology transition. Increasing commitment to IoT-enabled solutions and a broadening range of applications in use signal a clear acceleration in maritime digitalisation, but challenges remain.

Drawing on responses to a survey conducted in May 2020, the report sees owners/managers giving their primary drivers for digitalisation as cost reduction and operational efficiencies (Top 3 ranking, 71% of respondents), followed by regulatory compliance (Top 3: 60%).

In the case of compliance, the frequency with which owners/managers select digital safety management/ incident reporting and cybersecurity solutions aligns with IMO 2021 requirements to enhance reporting under the revised ISM Code.

The findings also point to a rapidly increasing need to get data off a vessel in real-time as opposed to using more manual methods such as noon reports; high-frequencyÂ data delivery supports more meaningful insights and creates the potential for greater savings.

Digital navigation solutions proved to be a close second, accounting for between one fifth and one-quarter of the applications deployed or under test. â€œRespondents who have deployed or tested Navigation applications were most likely to have deployed weather information (81% use it fleet-wide or commercially on some ships), followed by ECDIS updates (77%) and route optimisation (71%). Within two years, demand for route optimisation (79%) would equal weather information (79%), with new ECDIS implementations at 78%.

Despite these encouraging findings on digital adoption, where owners and managers were asked to identify challenges to implementation, 37% of 186 respondents included â€˜lack of or little evidence of value for moneyâ€™ as a â€˜top 3â€™ reason.

However, it is also fair to note that only 6% of respondents suggested that they felt so challenged because their â€œexisting systems are good enoughâ€, while the linked issues of lack of data standardisation (27%) and disjointed data and systems (27%) were counted separately. Other reasons for resistance were identified as expectations of a risk of cyber
attack and lack of staff training.

Evidence from Digitalisation Uncovered nonetheless identifies the direction of travel. Today,
42% of respondents use five or fewer applications on board, while 42% use 5-10. In 24 months, only 25% of respondents expect to be using 1-5 applications, with 38% expecting to use 5-10 and 28% envisaging 11-30.

If there are changes occurring in demand patterns, the same can be said for supply. With big data, AI and IoT sensors are seen as delivering the largest digitalisation benefits, 66% of respondents were using solutions from existing OEMs and suppliers (p39). However, 40% were using smaller, innovative companies, while 36% were co-creating or entering partnerships with early-stage companies.

Many owners and managers also said they were likely (29%) or very likely (19%) to work with a start-up within 12 months. Where the current report is concerned, crew training and management appeared as the most important digital application for fleet-wide adoption among owner/manager respondents with a focus on crew matters.

However, it should be acknowledged that Covid-19 has prompted a significant increase in the use of videobased connectivity by crew, for social and welfare reasons. It is highly likely that repeating the research behind Digitalisation Uncovered over the next few months would find far more than 17% of respondents identifying crew welfare issues as a top 3 driver for digital adoption.

For more details, click below for the full report.