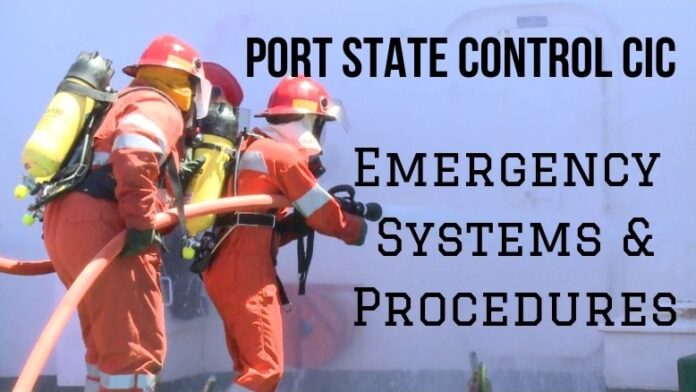 (www.MaritimeCyprus.com) The preparation of emergency equipment, such as emergency power sources and fire pumps of ships, and the ability of the crew in response to emergency situations, are critical factors in saving human lives and minimizing damage to ships. The emergency equipment of ships should be regularly maintained to ensure immediate use in emergency and hazardous situations, and their performance should always be guaranteed. Familiarization of seafarers with the emergency systems and procedures is also essential.

The purpose of this Concentrated Inspection Campaign (CIC) was to gain an overall impression of whether the equipment provided onboard complied with the relevant convention, the master and officers are qualified and familiar with operations relating to shipboard emergency systems and that equipment is properly maintained and functioning.

Ships were subject to one inspection under this CIC during the period of the campaign, carried out jointly between 1 September and 30 November 2019.

This report presents the results for the Paris MoU member states. Results for the Tokyo MoU member states are documented separately. A total of 48 ships were detained as a direct result of the CIC. Whilst the detention rate appears low (1.2%) it has to be borne in mind that a detention was not always recorded, where it could have been considered
in accordance with the guidance provided.

In 6.6% of cases (120) a fire drill and/or abandon ship drill, when witnessed, was not satisfactory and in 4.5% of cases (48) the accumulator batteries and switchboard, if the emergency source of power, were not in good condition.

In 4.4% of cases (172) for ships with water level detectors installed, the system and alarm arrangements were not operational.

A total of 833 inspections (20.8% of the total of CIC inspections) had one or more CIC-related deficiencies recorded. The most common deficiency was related to â€œMuster Listâ€, which was recorded in 201 cases, followed by â€œEmergency lighting, batteries and switchesâ€ 169 cases and â€œPublic address systemâ€ 109 cases.