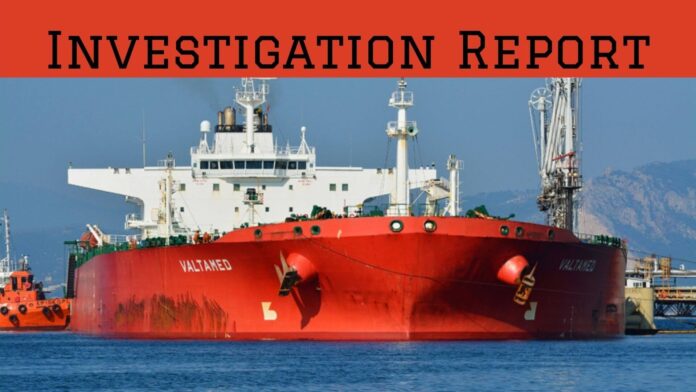 (www.MaritimeCyprus.com) Transport Malta has issued the report of its investigation of the fatality on the pumproom of the oil tanker Valtamed while at anchor off Turkey on 3 February 2020 awaiting berthing instructions. Pre-arrival tests of the high-level alarms of the vesselâ€™s cargo tanks, and the forepeak store and pump room bilges were being conducted by the crew members.

After testing the atmosphere of the vesselâ€™s pump room, the pumpman proceeded to the bottom platform to test the spaceâ€™s bilge alarms. Although the port side bilge alarm was successfully tested, the chief officer noted that the starboard side bilge alarm did not activate within the anticipated time.

Since the chief officerâ€™s calls went unanswered, he notified the bridge. Soon after, the general alarm was raised, and rescue procedures were initiated. On reaching the bottom of the pump room, the rescue team found the pumpman lying in the starboard side bilge.

The pumpman was hoisted out of the pump room, but he had no vital signs. Thereafter, the vessel proceeded towards the port for medical evacuation.

The autopsy report, based on the toxicological analysis, concluded that the cause of death was N-Butane intoxication. A small leak in the suction valve of the pump roomâ€™s starboard bilge, along with the routine draining of water during the warming-up of the steam-driven stripping pump, resulted in the accumulation of a small quantity of oily water in the starboard bilge space. It is possible that this oily water may have caused the pump man to slip, struck his head and fall unconscious while attempting to exit the space.