More
Facebook
Linkedin
Twitter
Home Loss Prevention Suez Canal and the MV Ever Given - impact on the maritime... 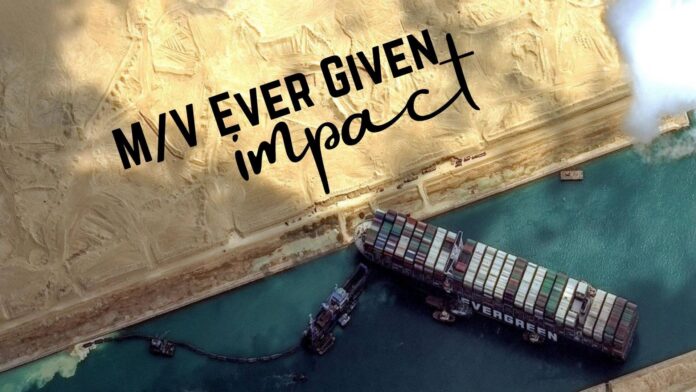 (www.MaritimeCyprus.com) The Suez Canal opened in 1869. Along with the Panama Canal, it is one of the most important maritime “shortcuts” ever built. Today, the canal is 193km (120 miles) long and is one of the busiest waterways in the world. It allows vessels to avoid the additional 6,000 km required to round the Cape of Good Hope, connecting the Mediterranean to the Red Sea and providing the shortest sea link between Asia and Europe.

The importance of the Suez Canal was made plain this week. A 400m long, 220,000-ton, 20,000 teu container ship, the MV Ever Given, entered the canal passing northwards, bound for Rotterdam from China. She was at her capacity, with photographs from the scene evidencing containers were stacked high.

The vessel lost control, turned sideways in the canal and ran aground, blocking the waterway.

At the time of writing, there are concerns that the operation to re-float the vessel could potentially take weeks, particularly if the vessel requires unloading, and that the vessel’s weight may prove too great to be pulled loose by tugs.

There are already a number of significant impacts being felt across the oil & gas and maritime sectors.

With those industry-wide effects becoming immediately apparent, attention now shifts towards the liabilities as between the parties to contracts of sale, among charterers, ship managers and owners, and between assured and their insurer.

There are a myriad of contractual issues that may arise from this incident, or others like it. In each case, it will require a careful analysis of the provisions of the (sale) contract, charter party and/or the policy of insurance (all of which may be relevant). For example:

The grounding of the Ever Given in the midst of one of the world’s busiest waterways is a reminder that delays to a voyage, or to a delivery, can be caused by unexpected, or rare occurrences. However, these unexpected or rare events can have significant consequences. Many contracts will not specifically cover “blockage” of key transportation routes, even though there may be extensive treatment of blockage within delivery or loading ports.

It serves as a reminder of the need for careful drafting in the allocation of delay risks in a contract, and the need to be alive to the specific provisions of existing contractual arrangements and insurance policies.