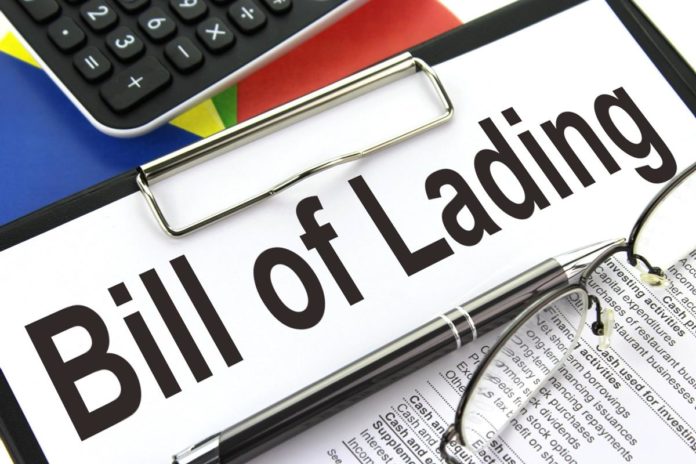 (www.MaritimeCyprus.com) In international trade goods are often bought and sold by traders and they often do not produce the goods. The trader earns on the price differential between his supplier and buyer. Often the trader will want to protect the identity of the supplier / shipper and may ask the carrier to switch bills of lading to another bill of lading which does not name the actual supplier. The original of bill of lading must be returned before a switch bill of lading will be issued. The carrier and/or freight forwarder must make sure that the original set of bills of lading are taken out of circulation and cancelled before the switch bill of lading can be released. This is important as it ensures that there is only one set of documents in force to prevent problems.

Other reasons why switch bills are issued:-

(a) the original bill names a discharge port which is subsequently changed (e.g. because the receiver has an option or the good are resold) and new bills are required naming the new discharge port:

(b) a seller of the goods in a chain of contracts does not wish the name of the original shipper to appear on the bill of lading, and so a new set is issued, sometimes naming the seller as the shipper. A variation on this is where party does not wish the true port of loading to be named on the bill;

(d) shipment of goods may originally have been in small parcels, and the buyer of those goods may require one bill of lading covering all of the parcels to facilitate his on sale. The converse may also happen i.e. one bill is issued for a bulk shipment which is then to be split.

Where switch bills are issued, the first set should be surrendered to the carrier in exchange for the new set. There is usually no objection to this practice. However, the switch bills may contain misrepresentations e.g., as to the true port of loading. If a receiver suffers loss as a result of this, then the carrier and his agent may be at risk.

In practice the switch bill set is often issued not against surrender of the first, set, but against a letter of indemnity. That may happen in any of the examples given above, and clearly will be the case where the first set has been delayed. Switch bills of lading issued in these circumstances may leave the carrier and his agents extremely exposed. The switch bills may be negotiated to a buyer who expects the goods to be delivered to him. The shipper holding the first set might not yet be paid by his buyer. The carrier may therefore be faced with claims from the shipper holding the first set of bills, and from the holders of the second set. The carrier will probably deliver the goods to one of these parties, and be liable to compensate the other. Any indemnity which the carrier has obtained may well be worthless. This is illustrated in the case below.

In the inaugural decision of the Malaysian Admiralty Court in the case of The Istana VI[1], the FOB buyers of cargo who were also the Charterers of the Vessel requested the Carrier to release the cargo without presentation of the Original Bill. The facts behind the fraud perpetrated on the Plaintiff was set out in the Judgement of the Court[2]:

The buyer Summerwind [ who did not pay for the goods] also issued a document termed a global bill of lading dated 23 October 2003 which specified the loading port as Dumai and the discharge port as Port Klang. The party to be notified was Mewah Oils Sdn Bhd, the receiver that eventually took possession of the oil carried on board the Istana VI. In this global bill of lading Summerwind stated and represented as follows to the defendant:

‘… We the undersigned request that the master of the above vessel deliver the cargo consisting of crude palm oil in bulk and 3998.421 mt and shipped by Kantor Pemasaran Bersama and Pt. Ivo Mas Tunngal at the Port of Dumai, Indonesia on 23rd October 2003 to the Port of Yantai China notwithstanding the original bills of lading having been issued, we Summerwind Trading Pte. Ltd. request the vessel to deviate her discharging port of calling for delivery at the port of Port Klang (West) Malaysia and consigned to ‘To Order’ and ‘Notify Mewah Oils Sdn. Bhd.’ and without prior production of the original bills of lading.’

[22]  In the same global bill of lading Summerwind provided the defendant with an indemnity in return for compliance with its directions above. This included the following:

… In consideration of your complying with our above request, we hereby agree as follows:

1.To indemnify you, your servants and agents and to hold all of you harmless in respect of any liability loss, damage or expense of whatsoever nature which you may sustain by reason fo the ship proceeding and giving delivering of the cargo in accordance with our request.

2.In the event of any proceedings being commenced against you or any of your servants or agents in connection with the ship proceeding and giving delivery of the cargo as aforesaid, to provide you or them on demand with sufficient funds to defend the same.

[23]  DW1, Dhiyana Triadi who testified for the shipowner, was cross-examined on the documents above as well as the email relating to the request by Summerwind that the defendant state a destination other than that which was planned and agreed between the parties to ‘assist’ Summerwind. He testified as follows:

A:Pak Wino is one of the employees of the Defendant based in the Jakarta office. The e-mail mentions that the charterers are finding difficulty to buy cargo. And they have converted some of the cargo bought for China for this shipment.

Q:What do you understand by that?

A:Converted means change. Then they say that the discharging port as Yantai and then as per standard shipping procedure the charterers will provide the owners with change of destination.

Q:Change of discharging port — from which port to which port?

A:It is not stated. Only states that the discharging port in the b/l to be changed to Yantai.

Q:What is the real port of discharge?

A:I can’t say that. It is just to be mentioned in the b/l.

Q:So this e-mail of 19 October 2003 you agree that neither Summerwind nor the Defendant had any intention to go to Yantai?

Q:Do you agree that following this the Defendant agreed to state a false port of discharge?

A:We just follow the instructions of the charterers to make the b/l.

Q:I put it to you that in agreeing with this request, the Defendant did not care whether the b/l holder would suffer loss.

A:I do not agree.

Q:I put it to you that the Defendant could easily have refused Summerwind’s request?

A:We don’t have reason for that. Not necessary to refuse.

Q:Do you agree that the proper shipping practice is that the Defendant must state the actual destination on the b/l?

Q:Are you saying that the Defendant can state a false destination?

A:There is an LOI (Letter of Indemnity) from the charterers that they require b/l to be issued to Yantai, China.

Q:So the Defendant was heavily reliant on this LOI in complying with this request?

[24]  It follows from the foregoing and the e-mail dated 19 October that the defendant understood and had agreed to Summerwind’s proposal:

(a)To issue local bills of lading to the shipper, KPB (which would be passed on to the lawful endorsees in due course) specifying the destination of KPB’s cargo as Yantai, China when at all times the voyage to be undertaken was to Port Klang, Malaysia. In short the statements and representations on the bills of lading relating to the destination of the cargo were false;

(b)To deviate from the discharge port stated on the bills of lading to be Yantai, China, to Port Klang, Malaysia; and

[25]  The vessel sailed off from Dumai on the morning of 24 October at 3.48am and arrived at Port Klang at around 3pm on the same day. DW1 issued an e-mail to this effect stating that the party to be notified with regards to the cargo was Mewah Oils Sdn Bhd. He further specified, on behalf of the defendant, that as the charterers, Summerwind had issued a letter of indemnity, discharge was to be effected upon the arrival of the vessel at Port Klang without production of the original bills of lading.

[26]  Accordingly on arrival at Port Klang the defendant issued a notice of readiness to Mewah Oils Sdn Bhd at 15.06pm which was accepted at 20.00 hrs (or 8pm) the same day. Discharge commenced immediately thereafter at 20.10 hrs (or 8.10pm) and was completed on 26 October at 8am. The surveyors[2011] 7 MLJ 145 at 162confirmed that the cargo was discharged in good order and condition on that date. It is apparent from the foregoing that discharge to Mewah Oils Sdn Bhd had proceeded without production of the original bills of lading but against the letter of indemnity furnished by Summerwind the charterer.

Philip has been in legal practice in Singapore and Malaysia for the past 31 years handling both contentious and non-contentious areas. He is the Partner heading the Shipping, International Trade, Insurance Practice in Azmi & Associates Malaysia. He is an Arbitrator with the key International Arbitration Centres of LMAA, SCMA, EMAC, ICC, LCIA, AIAC, KCAB and others.

He is on the Expert Advisory Panel of the Malaysian Competition Commission and a member of ABLM the Legal Sub-committee of FIATA.

He is also the author of key Practitioner Texts eg in Equity, Conflict of Laws, Sale of Goods and the Shipping Titles.