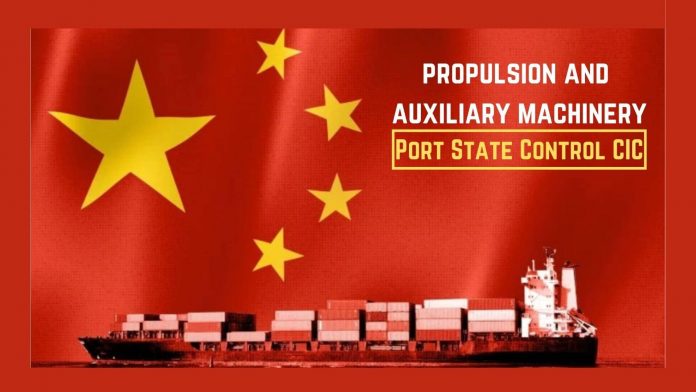 Shanghai MSA made it clear that a ship which suffers a malfunction of forgoing machinery and poses a hazard to the safety of navigation will be subject to thorough administrative investigation as well as PSC/FSC inspection. It is advised that serious deficiencies will give rise to detention.

The main objectives of this CIC are to ensure that ships and shipping companies fulfil their non-delegable responsibility for the safety of operation, improve skills of master and crew of the ship for safety and emergency operation the steering gear, propulsion and auxiliary machinery and minimize the loss of lives and property arising from related accidents.

Unlike CIC launched by Tokyo MOU, PSCOs/FSCOs will not apply a questionnaire listing a number of items to be covered during the CIC, but instead will use a Checklist (downloadable further below) issued by MSA which will be helpful in understanding the scope of the CIC.

The listed items in the Report are not exhaustive and may be varied to take account of the circumstances of the particular ship or its operations. Experience suggests that when an incident in relation to propulsion and auxiliary machinery failure occurs, the ship will be subject to both investigation and PSC/FSC inspection and it is highly likely that detention is inevitable. Normally, the failure of machinery and proper operation alone at the incident time will only give rise to a request to rectify the deficiency before departure (inspection action code "17") but a combination of deficiencies of a less serious nature may result in the detention of the ship.

We note that ISM-related detainable deficiencies (inspection action code "30") are frequently found where technical or operational deficiencies which individually do not lead to detention but collectively warrant the detention of the ship which indicates a serious failure, or lack of effectiveness, of the implementation of the ISM Code.

Under these circumstances, ISM will be reported in the PSC inspection report with the
requirement that an additional safety management audit has to be carried out by the flag state or the RO before the ship may be released from its detention.

Further, it is expected that a ship may be placed under quarantine for a period of time subject to local quarantine policy before investigation and PSC/FSC inspection takes place.

We have come across several cases where vessels had to wait a long time before investigations and PSC/FSC inspections take place as a result of main engine failure and MSA said that a ship has to be quarantined for some time counting from the next day when the vessel left the last foreign port and the latest requirement is 14 days but there is no written document to justify the said requirement.

In light of the above, ships are reminded of following best practice to ensure compliance with the provisions of the relevant regulations from SOLAS Chapter II-1/II-2 to minimize risks of failure of machinery and proper operation before entering restricted waters and undertaking critical manoeuvres. If ships are in any doubt of the delay in investigation and inspection following an incident, we would suggest that MSA’s order be complied with in the first instance and then remedies be sought afterwards.

The relevant CIC Checklist, is available to download below: