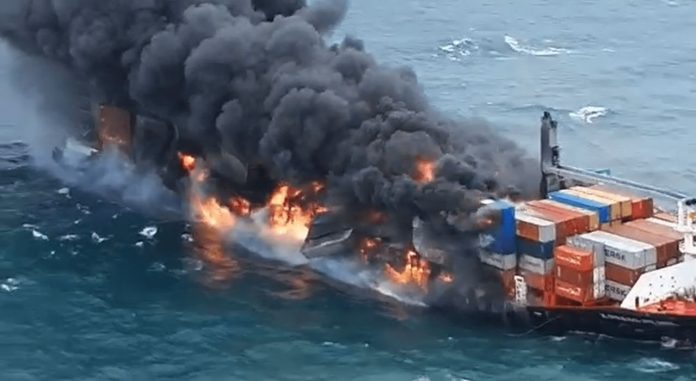 (www.MaritimeCyprus.com) While Sri Lanka braces itself for a possible oil spill from a sunken Singapore-registered container ship, the vessel operator's chief executive on Thursday (Jun 3) expressed “deep regrets and apologies” for the impact that the incident has caused on livelihoods and the environment. The container ship X-PRESS PEARL was carrying 1,486 containers, including 25 tonnes of nitric acid, when it caught fire on May 20 off the west coast of Sri Lanka. It burned for 13 days before the blaze was finally put out.

Shmuel Yoskovitz, CEO of X-Press Feeders, owner of the stricken containership X-Press Pearl, has apologised for the environmental and economic damage caused by the fire onboard, which raged for 13 days.

Shipments of plastic pellets, called nurdles and used in the manufacture of goods, were among the cargo onboard and washed up on the beach in large quantities.

The pellets are difficult to collect, easily carried by the tide and attract toxins from the water, concentrating them in the plastic. They can cause death when ingested by marine life.

In an interview with Singapore news outlet CNA, Mr Yoskovitz confirmed that heavy equipment had been deployed to help with beach cleaning and that the company was co-operating with the authorities in the aftermath of the major incident.

1 of 7
He said: “I’d like to express my deep regrets and apologies to the Sri Lankan people for the harm this incident has caused to the livelihood and to the environment of Sri Lanka.”

Mr Yoskovitz said the company had turned to environmental experts, including the International Tanker Owners Pollution Federation, to monitor the situation. In addition, salvors have remained on the scene to monitor the wreck for any discharges.

Sri Lankan authorities suspect that the cause of the fire was a leaking container load of nitric acid, which interacted with other cargo in one of the forward holds of the vessel.

Speculating on the cause of the fire Mr Yoskovitz said the nitric acid leak from the container was “the most probable cause”, though he emphasised that there was no certainty about the cause.

Shipping lines and other concerned industry bodies were trying to raise awareness about the dangers of fire onboard ships, less-serious events occurring regularly and cargo leaks apparently happening almost on “a weekly basis”, added Mr Yoskovitz.

He pointed out that while carriers load containers, they were not responsible for stuffing the boxes, relying on their customers to perform this task professionally.

International Union of Marine Insurers secretary general Lars Lange told The Loadstar that, while the International Maritime Organization (IMO) was developing new rules governing the design of ships to protect against fire, regulations would not be available until 2028.

“Containerships are not designed to fight fires, there are no fire-proof barriers on board; nobody would be able to build a warehouse like this,” said Mr Lange.

He said it was critical that the regulations were changed to make sure all owners complied.

The regulations currently under discussion at the IMO’s Maritime Safety Committee include fire-proof barriers between holds, fire detection systems, more firefighting equipment, including high-powered hoses, and the ability to flood a single hold to contain a fire.

All these measures are already found on MSC’s Gülsün-class vessels, but are costly and few other vessels, if any, are designed in this way.

One industry organisation that has signalled concern over cargo fires for more than a decade is insurer the TT Club, which, with other concerned industry bodies, founded the Cargo Integrity Group (CIG).

CIG has produced easy-to-use reading material, in a number of languages, promoting the awareness and wider use of the IMO/ILO/UNECE Code of Practice for packing cargo transport units – known as the CTU Code.

Moreover, CIG is continuing to lobby for changes in “regulatory requirements to improve the clarity, application, implementation and enforcement of mandatory regulations, including the International Maritime Dangerous Goods (IMDG) code”.

Peregrine Storrs-Fox, TT Club’s risk management director, said: “Effective review of regulations is to be applauded.  Indeed, the latest meeting of the IMO’s Maritime Safety Committee debated in detail the issue of containership fires.  However, such consideration will not result in speedy change.”

Poorly packaged battery acid was the apparent cause of the X-Press Pearl incident, and one industry source said that, while the shipper should have known better regarding the packaging of the chemical, the ship’s master had been aware of the leak and wanted to do something about it but was refused help at two ports – another issue from this event that must be considered by regulators.