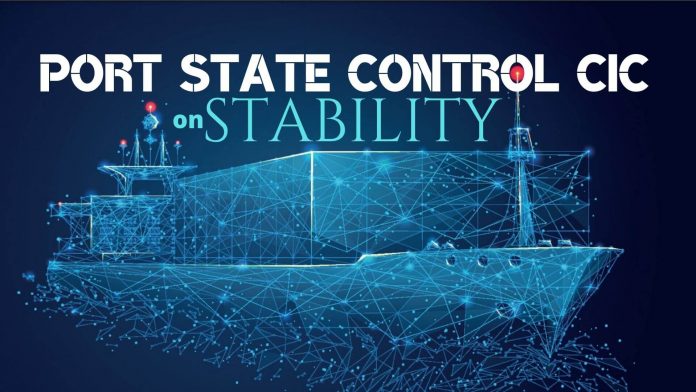 (www.MaritimeCyprus.com) Several serious incidents have initiated CICs from the major port states. The CIC on Stability in General by the Paris and Tokyo MoUs will be carried out from 1 September to 30 November 2021. The Black Sea, Indian Ocean, Mediterranean, Riyadh and Vina del Mar MoUs will join this initiative, whereby the Caribbean MoU, US Coast Guard and AMSA have their own CIC or local inspection campaigns.

Paris MoU and Tokyo MoU CIC on Stability in General

There was a similar Paris MoU CIC on Tanker Damage Stability in 2010, where the main focus was on the IMO stability requirements for tankers. Therefore, for the upcoming CIC,  the focus will be set on the stability booklet and loading computer. It should be assumed that the attending Port State Control Officer (PSCO) will evaluate whether the Master and responsible officers are well trained and familiarized with the systems provided on board.

The CIC will be included in the routine PSC inspections in the period from September to November 2021. The focus on the special topic is carried out on a common additional checklist for every PSCO.

Any deficiencies found during the CIC on Stability in General will be reported in the PSC inspection report with the related PSC Code. The deficiency codes related to this CIC are likely to be the following:

Considering the above deficiencies, we assume the questionnaire (expected to be published at the beginning of August) items used by the PSCO will mainly relate to operational issues and the familiarization of these by the Master and officers. During the inspection, PSCOs might ask to show and explain the stability calculation for the current voyage and if approved conditions of stability are available.

Finally, all stability-related deficiencies mostly affect the Safety Management System (SMS) and can trigger an ISM related deficiency, especially if they are numerous or reoccurring. Therefore, for deficiencies found during this CIC, a specific ISM-related item might be part of the final checklist for the CIC.

The Caribbean MoU will conduct a CIC on Ballast Water Management. This CIC will be carried out in the second half of this year and will last for three months, but until now neither details nor dates have been published.

The USCG is currently running a CIC limited to US-flagged vessels. As a result of investigations of the MV EL FARO incident in 2015, the USCG carries out inspections on the ISM Code seeking evidence of the implementation of emergency procedures and cyber risks. The CIC is based on the USCG guidance on emergency preparedness, which can be found in the Marine Safety Information Bulletin MSIB-16-20. A nonexhaustive list of 21 emergency scenarios was issued in CVC-WI-004(2): U.S. Flag Interpretations on the ISM Code.

According to AMSA, the aim of the FIC is to draw the attention of shipowners and operators to the regular necessary maintenance on livestock carriers and to check the familiarity of the Master and officers regarding the different stability conditions of their ship. The FIC is not part of a PSC inspection, and data about the FIC inspection will not be transferred to the regional PSC regime database. However, in case an FIC inspection finds deficiencies, the PSCO may proceed to a full PSC inspection, which will be recorded in the regional PSC database. Further information, including a checklist, is available on AMSA’s website.

USA: COVID-19 Vaccine Availability for Seafarers in US Ports

How to conduct an effective accident investigation interview