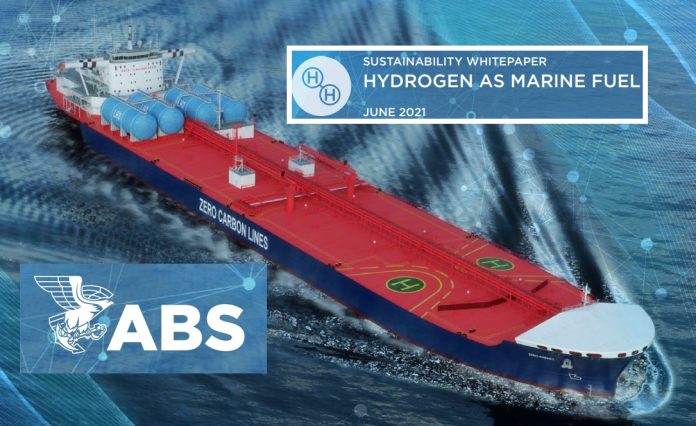 (www.MaritimeCyprus.com) Many technologies are being considered to reduce carbon emissions from shipping. Hydrogen (liquefied LH2, or gaseous H2) was identified as a low- to zero-carbon fuel that can help meet the IMO GHG reduction target for 2050. Hydrogen offers ship owners and operators a low-carbon and low-emission fuel option for potential use in internal combustion engines and fuel cells.

This whitepaper provides information for the consideration of hydrogen as marine fuel in both the near-term and long-term.

Hydrogen is typically found naturally as a compound of either water or methane. To acquire pure hydrogen, the element must be separated from these compounds. At standard conditions, hydrogen is a colorless, odorless, tasteless, non-toxic, relatively nonreactive and highly combustible gas with a wide flammability range.

Hydrogen is commonly produced by converting natural gas or coal into hydrogen gas and CO2 , although for the long-term sustainability goals, renewable energy can be used to generate hydrogen through electrolysis. In manufacturing, hydrogen is typically used for chemical production or as an industrial feedstock.

In recent years, industry has recognized hydrogen’s potential to generate electricity through fuel cells and combustion technologies. While in many cases hydrogen may be derived locally from fuel reforming of a hydrogen carrier (and hence may have direct GHG emissions), in a hydrogen fuel cell consuming a pure hydrogen fuel supply, greenhouse gases are not emitted. In combustion engines or gas turbines, hydrogen can be used to significantly reduce GHG emissions.

Note that gas turbines consuming hydrogen (or hydrogen blends with natural gas) are used primarily for land-based power production and are not considered in this document for power generation on marine vessels.

While hydrogen appears to be an ideal fuel for power generation, it carries various challenges of advanced storage requirements and fire hazard mitigation. To become a competitive alternative marine fuel, hydrogen may also face the challenges of availability and high costs to scale production and transportation infrastructure.

Hydrogen is characterized by having the highest energy content per mass of all chemical fuels at 120.2 MJ/kg, compared to other marine fuels. In terms of mass energy, it exceeds MGO by 2.8 times, and alcohols by five to six times. Therefore, hydrogen fuel can increase the effective efficiency of an engine and help reduce specific fuel consumption.

However, on a volumetric basis, due to its lower volumetric energy density, liquid hydrogen may require four times more space than MGO or about two times more space than liquefied natural gas (LNG) for an equivalent amount of carried energy. Also important to consider when comparing fuel energy and required volumes are the energy efficiencies of the consumer, or electrical energy losses in fuel cells.

True for all marine fuels, additional volumes of fuel may be required to account for efficiency losses between the tank to the output shaft power. Hydrogen requires low temperatures below -253° C (-423.4° F) to liquefy. Due to this very low temperature, the required volume to store liquid hydrogen could be even higher when considering the necessary layers of materials or vacuum insulation for cryogenic storage and other structural arrangements.