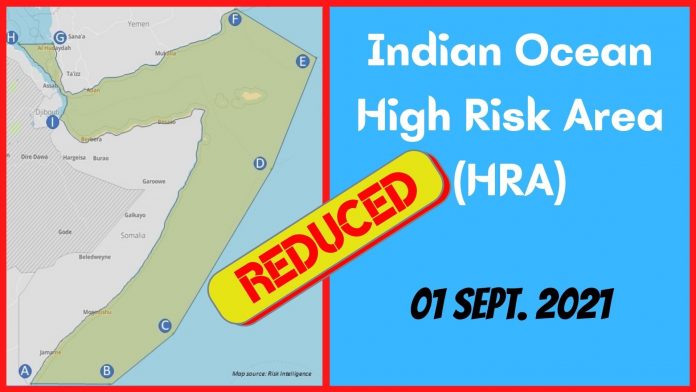 (www.MaritimeCyprus.com) The Somali piracy High Risk Area is designated by the BMP Co-Authors. The HRA was implemented over a decade ago and represents where it is considered a higher threat of attack from pirates exists, and additional security requirements may be necessary. The HRA was last amended in May 2019, and the Co-Authors began a further review of the extent of the area in February 2021.

The review takes into consideration representations made by Kenya concerning the extent of the HRA in their Exclusive Economic Zone (EEZ). These were discussed directly with the Co-Authors and in the plenary debate of the IMO’s 103rd session of its Maritime Safety Committee. Although IMO plays no formal role in the designation of the HRA, the Committee encouraged the BMP Co-authors and appropriate bodies to continue to work on the matter with regional stakeholders, including coastal States and military authorities; and the Co-Authors committed to report on the findings of the review process at MSC 104.

The following outlines that review and describes options for the revision of the HRA.

A thorough threat assessment for the Western Indian Ocean was conducted by the co-authors, drawing on the threat assessments of SHADE, EUNAVFOR Atalanta, UNODC, and data from UKMTO. The following conclusions were drawn from this process:

It is clear from the piracy threat assessment the region can no longer be considered either one of high threat or risk.  Whilst maritime threats exist which generate risks to shipping,  these risks are successfully mitigated by military deployments, maritime situational awareness, and the application of self-protection measures by ships dependent upon their voyage risk assessment, as well as social and political changes in the region. Furthermore, the threats have diversified as the security climate has changed, something which is also reflected in the expanded mandates of military operations in the region and changes in industry guidance.

The designation of a high-risk area based solely on the threat from Somali piracy is now outdated, and a more dynamic mechanism is required to account for the changed threat environment in the region.  The title “High Risk” is also outdated as the discussion is clearly about Threat and not Risk (See BMP 5 Section 3).

However, whilst the threat from Somali Piracy remains low, other threats exist, a total reduction in deterrent activities in the region could present opportunities for the perpetrators of maritime insecurity and should be avoided. Therefore, whilst the area cannot be deemed to be “High Risk”, it remains the case that security threats are present and thus some designation is required to maintain the status quo with respect to self-protection and deterrence and to avoid a return to a situation in which the threat to shipping heightens.

In addition, as the understanding of all security threats and the mitigation measures applied to them has increased over recent years, and as new security threats have emerged or intensified, it has become apparent the HRA concept as it currently exists is outdated and misleading. Whilst the HRA was a highly effective measure to raise awareness of the threat of Somali Piracy and the area in which mitigation measures should be applied at the peak of the crisis, it has essentially served its purpose and is now an anomaly when compared to other areas of more critical threat such as the Gulf of Guinea, where an HRA has not been designated. This disparity has been a source of confusion and frustration in the industry, and it is incumbent on the Co-Authors to resolve it in a way that benefits the industry.

Revision of the High Risk Area

Taking the outcome of threat assessment into consideration, and a recognition that the concept as it stands in the context of global maritime security threats is now an outdated anomaly, the BMP Co-Authors believe that a stepped approach to revision of the High Risk Area is a balanced way forward.

From 1 September 2021, the HRA will be amended as follows, covering all threats described in BMP 5 Section 2: 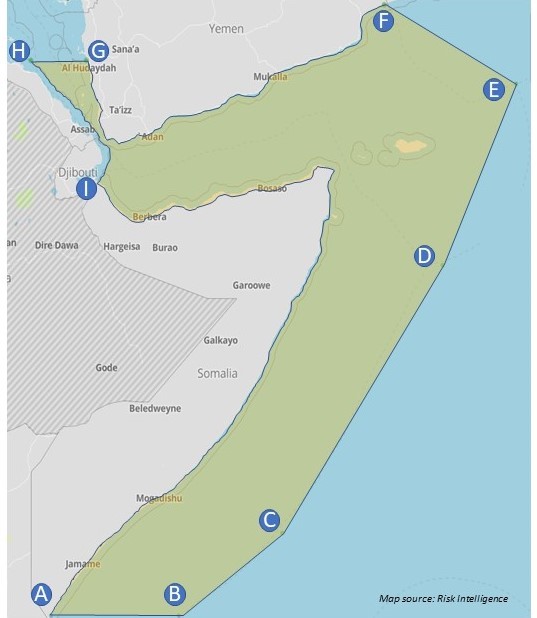 Position I (the coastal border point between Djibouti and Somalia), then

Follow the Somali coast eastwards and then southwards, to Position A.

This new designation is a temporary measure whilst the Co-Authors undertake substantive work to address maritime security threats in a global context. It is anticipated that this work will be completed by 31 December 2021. After this date, a new industry-led security threat assessment will be provided to shipowners and operators, following the process described subsequently.

Recognising that the name High Risk Area no longer reflects the severity of the threats in the region, and the disparity between this area and others in which the threat is critical, the BMP Co-Authors will develop a mechanism to consolidate guidance on security threats around the world. This process will draw on a wide range of resources, including military intelligence and data, and will provide periodic threat assessments to allow shipowners and operators to conduct thorough threat assessments for their fleets. Consequently, it is expected that the High Risk Area, in its current form, will no longer be used and will be replaced by this more dynamic approach.

By employing a more dynamic threat assessment process the Co-Authors will regularly provide more relevant information on the threats faced by shipping, and to clearly identify areas in which threats exist. The aim of the process will be to define security threats consistently wherever they may occur, so that owners and operators will be aware of the level of threat faced, and mitigation measures that can be applied to minimise the effect of those threats as they manifest as risks. The first output of this process will be delivered in January 2022. The shipping industry will be consulted during this process to ensure that the final product meets the needs of owners and operators.