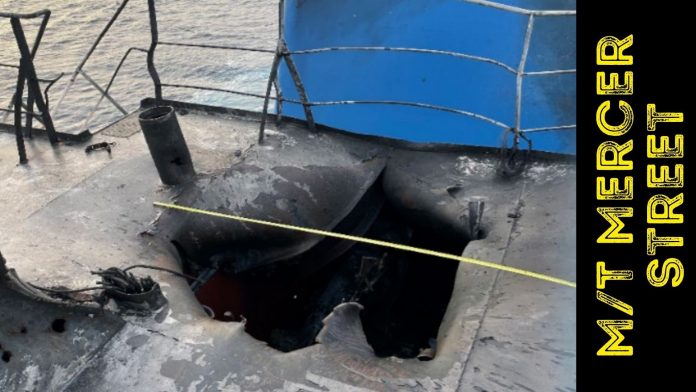 After first failed UAV attack, crew was able to recover some UAV debris. On 30 July, in a separate and deliberate attack, MERCER STREET was struck by another drone, killing the ship’s master (Romanian citizen) and a security officer (UK citizen).

The crew followed appropriate procedures, gathered in safe haven inside the ship, and informed their company of an attack.

The company informed UK Maritime Trade Organization (UKMTO) of the incident, who then
communicated the matter to Headquarters, US Naval Forces Central Command (USNAVCENT).

Following the attack, an expert explosive investigative team from the USS Ronald Reagan embarked the ship to examine the evidence and interview the surviving crew members.

1)      The M/T Mercer Street was targeted by two unsuccessful explosive UAV attacks on the evening of July 29. The crew reported the attacks via distress calls on the evening of July 29. Based on crew interviews, the investigative team found credible the reports of the attacks, which impacted the sea near the M/T Mercer Street.  Investigators found small remnants of at least one of the UAVs on Mercer Street that the crew had retrieved from the water, corroborating the reports.

2)      The investigative team determined that the extensive damage to the Mercer Street, documented in the attached slides, was the result of a third UAV attack on July 30.  This UAV was loaded with a military-grade explosive, and caused the death of two crewmembers; the master of the ship, a Romanian citizen, and a United Kingdom national who was part of the security detail.

3)      The explosive detonation following the UAV impact created an approximately 6-foot diameter hole in the topside of the pilot house and badly damaged the interior. Explosive chemical tests were indicative of a Nitrate-based explosive and identified as RDX, indicating the UAV had been rigged to cause injury and destruction.

4)      Explosives experts were able to recover several pieces of this third UAV, including a vertical stabilizer (part of the wing) and internal components which were nearly identical to previously-collected examples from Iranian one-way attack UAVs. The distance from the Iranian coast to the locations of the attacks was within the range of documented Iranian one-way attack UAVs. Following an on-scene analysis, some of the material was transferred to U.S. Fifth Fleet headquarters in Manama, Bahrain and subsequently to a U.S. national laboratory for further testing and verification.

5)      U.K. explosive experts were provided access to the evidence at the Fifth Fleet headquarters. Evidence was shared virtually with Israeli explosive experts. Both partners concurred with the U.S. findings.

U.S. experts concluded based on the evidence that this UAV was produced in Iran. 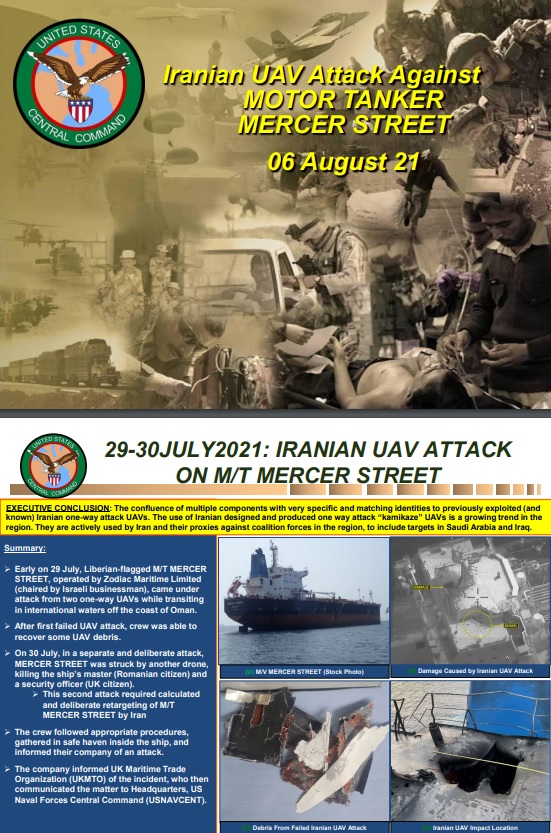