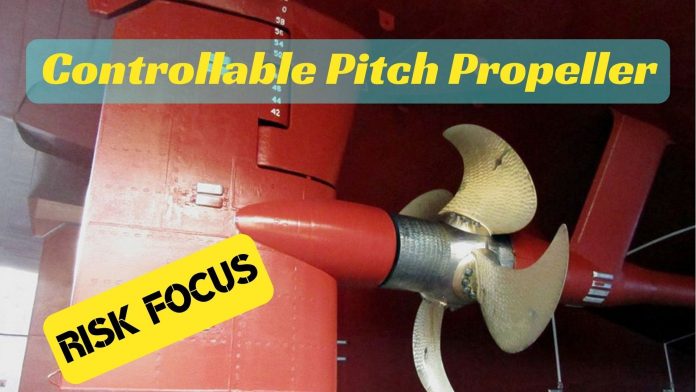 (www.MaritimeCyprus.com) Failure of Controllable Pitch Propellers (CPP) occurs and will continue to occur. These usually involve damage to a berth or a collision, but there have been incidents where the CPP failure has resulted in injury to personnel both ashore and on board.

It is important for the master, watchkeepers and engineers to know what the default position is. This should be included in the initial onboard familiarisation of a ship when a new officer joins. It should be a part of the ship’s preparation to have a trained response for a possible CPP failure;

what are you going to do if the CPP fails?

This knowledge should be available to all watchkeepers on board.

A CPP system covers the complete range of a ship’s manoeuvring demands, including full ahead, dead slow, stop and astern, merely by controlling the propeller blade pitch.

Most ships that require a high degree of manoeuvrability are fitted with a controllable pitch propeller system. Although a CPP has a higher degree of flexibility for the manoeuvring of a ship, its design, manufacture, installation, and operation are more complex than a conventional fixed pitch propeller. It is due to the complexity of the CPP operation and control that failures may occur, and these potential failures must be taken into account by the ship’s crew.

Brief description of a CPP

A CPP control system comprises the main hydraulic system controlled by either a pneumatic or electrical signal. This may be solenoid valves with electrical connections for the hydraulics operation and air cylinders for pneumatic actuation. The hydraulic system changes the pitch of the propeller depending upon the command given. CPPs are far more
responsive than the normal stop/start engine movements on ‘conventional’ fixed pitch propeller ships.

Failure of a CPP system

The question that should be asked with respect to a CPP system is, what is the failure default position of the blade pitch if the control signal is lost? This could occur from an air, electrical or hydraulic failure, caused, for example, by a generator failure or blackout.

There are some systems in operation where, if the control signal is lost, the failure default position is either full ahead, full astern or remaining in its current position. The risk to the ship and the surrounding environment is therefore obvious if the failure takes place during a manoeuvring operation. A number of CPP failures have occurred when the ship was
manoeuvring off the berth; the CPP reverts to a default position (ahead, astern or in the last known position) or defaults possibly to zero pitch.

Ideally, a CPP failure position would be zero blade pitch (no thrust). However, all systems are at risk if, for example, a solenoid valve sticks in either the ahead or astern position during critical operations.

The ship’s master and officers should always be aware of the failure position of the CPP system in use on board, and notices to this effect should be clearly displayed.

Controllable Pitch Propellers (CPP) are a complex and expensive piece of machinery and thus the Engine team onboard must be well versed to ensure no breakdown takes place, by knowing the system inside-out.