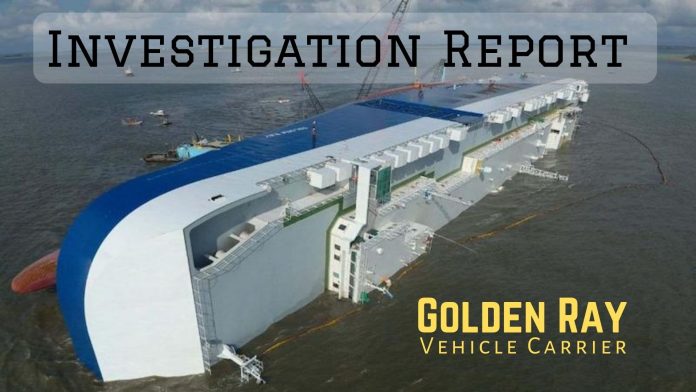 (www.MaritimeCyprus.com) The US National Transportation Safety Board (NTSB) reported that inaccurate stability calculations caused the capsizing of vehicle carrier GOLDEN RAY on September 8, 2019, as it transited outbound through St. Simons Sound near Brunswick, Georgia.

The capsizing resulted in $200 million worth of damages. The NTSB Marine Accident Report details the NTSB’s investigation of the incident. All 23 crewmembers and one pilot on board were rescued, including four engineering crew who were trapped in the vessel for nearly 40 hours.

Two crewmembers sustained serious injuries. The GOLDEN RAY sustained significant damage due to fire, flooding, and saltwater corrosion, and was declared a total loss estimated at $62.5 million. An estimated $142 million worth of cargo, was also lost.  At the time of its demise, the ship was carrying about 4,100 Kia, Chevrolet, GMC, GM, Mercedes-Benz, and Ram vehicles.

​​​About 0100 eastern daylight time on September 8, 2019, after unloading and loading vehicle cargo during the previous day, the 656-foot-long, Republic of the Marshall Islands-flagged roll-on/roll-off vehicle carrier Golden Ray departed the Colonel’s Island Terminal in the Port of Brunswick, Georgia, en route to Baltimore, Maryland. A state pilot from the Port of Brunswick navigated the vessel as it proceeded outbound through the Brunswick River and into St. Simons Sound. The pilot navigated the vessel through two left turns, and, as the vessel approached the right turn into Plantation Creek Range, which led to the Atlantic Ocean, the pilot gave rudder orders to the helmsman to turn the vessel to starboard. As the vessel turned to starboard, it began to heel quickly to port.

The pilot and the vessel’s master began rapidly issuing rudder commands in an attempt to counter the heeling. However, the Golden Ray continued to heel over, the rate of turn to starboard increased, and the vessel heeled to port to about 60° in less than a minute. Water entered deck 5 through the vessel’s open portside pilot door and flooded through open watertight doors to the engine and steering gear rooms. The vessel eventually settled on its port side at an angle of 90°.

The US Coast Guard responded to the accident, along with tugboats and pilot boats from the Port of Brunswick, first responders from the Georgia Department of Natural Resources and Glynn County, and vessels from Sea Tow. Responders were initially able to rescue the pilot and 19 of the 23 crewmembers on board. Four engineering crewmembers remained trapped in the engine room until the following evening, September 9, when responders cut into the vessel’s hull to rescue them. Two crewmembers suffered serious injuries. Total costs for the loss of the vessel were estimated at $62.5 million, and total costs for the loss of the cargo were estimated at $142 million.

​The National Transportation Safety Board determines that the probable cause of the capsizing of the Golden Ray was the chief officer’s error entering ballast quantities into the stability calculation program, which led to his incorrect determination of the vessel’s stability and resulted in the Golden Ray having an insufficient righting arm to counteract the forces developed during a turn while transiting outbound from the Port of Brunswick through St. Simons Sound. Contributing to the accident was G-Marine Service Co. Ltd.’s lack of effective procedures in their safety management system for verifying stability calculations.​​

For further details you can download the complete investigation report below: