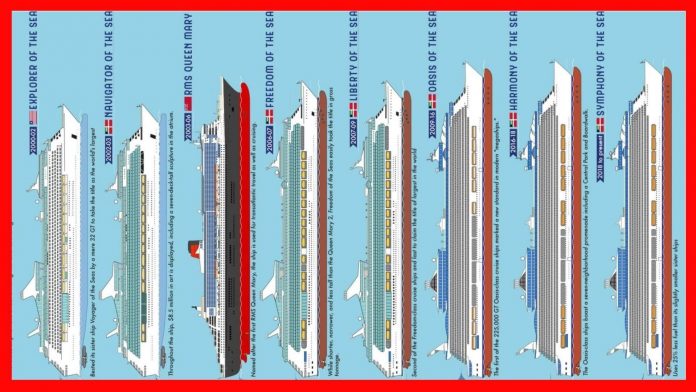 (www.MaritimeCyprus.com) The Titanic lives large in our minds, but it’s probably not surprising that the world record for biggest passenger ship has been broken many times since its era. In fact, today’s largest passenger ship can now hold over 6,000 people—more than double the Titanic’s capacity.

This infographic looks at which vessels held the title of the world’s largest passenger ship over time, and how these vessels have evolved since the early 19th century.

Before diving into the ranking, it’s worth explaining what constitutes a passenger ship.

Passenger ships are vessels whose main purpose is to transport people rather than goods. In modern times, there are three types of passenger ships:

Traditional ocean liners are becoming obsolete, largely because of advancements in other modes of transportation such as rail, automobile, and air travel. In other words, the main priority for passenger ships has changed over the years, shifting from transportation to recreation.

Now, luxury is the central focus, meaning extravagance is part of the whole cruise ship experience. For example, the Navigator of the Seas (which was the largest passenger ship from 2002-2003) has $8.5 million worth of artwork displayed throughout the ship.