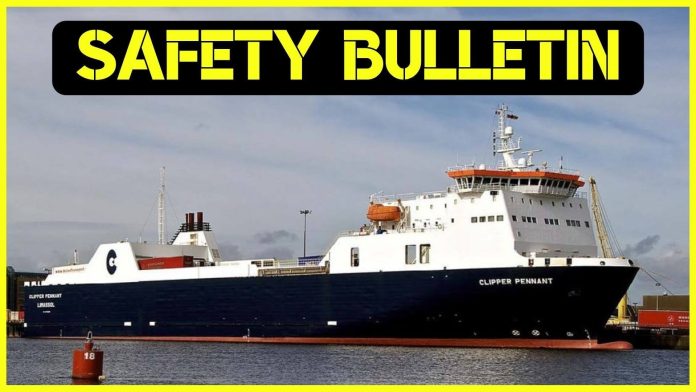 (www.MaritimeCyprus.com) At about 1400 on 20 July 2021, the bosun of the roll-on roll-of cargo ferry Clipper Pennant suffered fatal crushing injuries during cargo loading operations.

The accident occurred after the bosun had directed a tractor unit driver to push a semi-trailer into its stowage location, between a semi-trailer that had already been lashed and the bulkhead at the port forward end of the upper vehicle deck (Figures 1 and 2). As the semi-trailer was being manoeuvred, the bosun had positioned himself between the moving semi-trailer and the vessel’s structure, resulting in the crushing accident.

Although the UK Marine Accident Investigation Branch is still investigating the incident, it released a safety bulletin to advise that where tractor units are being used to position semi-trailers, there is an extreme risk of crushing injuries, particularly where the semi-trailer is maneuvering close to the ship’s structure, with limited means of escape for crew on deck.