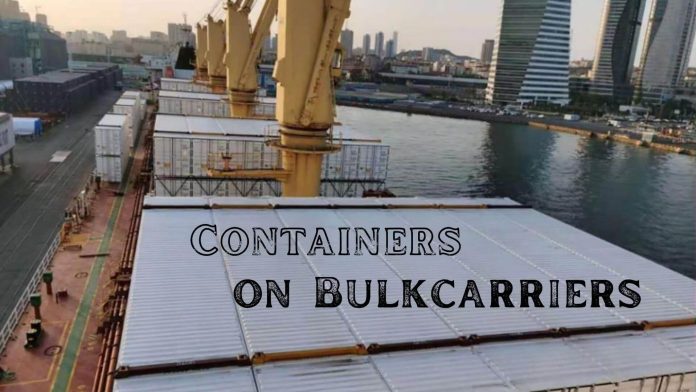 (www.MaritimeCyprus.com) Are conventional bulk carriers suitable to carry containers? This question has been raised by several industry bodies and in this article we will look at the technical and legal implications of such conversions. Carriage of containers on bulk carriers is a hot topic, and careful planning and preparation is necessary to ensure the safety of the crew, ship and cargo.

The main deck and hatch covers on modern bulk carriers usually have a structural capacity of around 2.0 to 2.5 t/m2 of uniformly distributed load (UDL). The challenge is that the main deck and the hatch covers are not designed to take the point loads from the containers and the cargo securing equipment. Local supporting structures for the container socket and/or other lashing devices must be considered. In addition, the transverse and longitudinal hatch cover stoppers may need to be modified.

Bulk carrier cargo holds are designed for large loads from bulk cargo, and the overall strength is more than sufficient to carry the relatively light containers. However, the same challenge with point loads as for the deck and hatch covers applies.

When containers are carried on deck, compliance with applicable stability and longitudinal strength criteria in deck cargo loading conditions must be shown in updated/amended stability manuals. In general, intact GM limit curves shall be recalculated considering the additional wind profile area from the containers.

The Loading Computer System (LCS) will have to be updated as necessary with new GM limits, profile curves or other stored data. In cases where the ship does not need any new limits or data, a test condition with deck cargo shall be provided. Please note that some LCS do not support non-bulk cargo and deck cargo.

The stowage and securing of cargo other than bulk cargo is to be described in an approved Cargo Securing Manual (CSM). Many bulk carriers already have such an approved manual because they are intended for carriage of breakbulk, e.g. steel coils. With the information given in the CSM, the crew can design and execute a safe cargo securing of containers.

In case the vessel is intended to carry containers containing dangerous goods, SOLAS Chapter II-2 Regulation 19 must be observed, and the vessel must be equipped and certified accordingly. The stowage and segregation requirements of the IMDG Code must be observed when planning the container stowage.

If containers are carried as deck cargo, bridge visibility (SOLAS V Reg. 22) and COLREG requirements must be considered. The so-called castle stowage of containers obstructing max permissible blind sectors for visibility is normally not accepted.

Voyage planning: On a container vessel weather routeing is a very important part of the voyage planning process. Heavy weather, resulting in parametric and synchronous rolling, has been a common factor in nearly all claims related to container stack collapses. Readers interested in knowing more would find GARD's 'Why do containership stacks collapse and who is liable?’ useful. Advanced weather routeing software and services are available, and operators should consider adopting these technologies for the safe execution of the voyage. Appropriate weather limiting factors must be defined or rather re-defined, such as the maximum wave and swell height, as these factors will be different depending on whether the vessel is carrying bulk cargo or containers.


Monitoring during voyage: During the voyage, the crew will need to actively monitor the lashings as they are likely to slacken during the voyage due to vessel movements. In addition to the lashings, the vessel will also need to monitor stability conditions during stages of the voyage. Bunker consumption during passage will affect the stability of the vessel which will need to be compensated with ballast, especially if the vessel has a low GM at departure from load port.

Safe access to the container cargo needs to be observed to allow for monitoring of securing arrangements during the voyage. Under-deck spaces must be accessible and provided with ventilation, illumination, and atmosphere check to allow safe access.

The side projected area of containers stowed on deck and hatch covers is to be considered for the selection of mooring and towing lines, and for the loads applied to shipboard fittings and supporting hull structure.

It is recommended that you apply the class notation Container, which provides a design standard enabling the safe and reliable transport of containers on ships, especially if three or more tiers of containers are intended.

It is also recommended that you ensure compliance with the Code of Safe Practice for Cargo Stowage and Securing (CSS Code) Annex 14 by assigning the class notation Safelash.

Can an owner refuse to carry containers on board?

The position is uncertain. However, owners can look to the vessel description clause in the charterparty, which would usually indicate the contemplated trade. For example: “Vessel is a bulk carrier, fully fitted to carry grains and in a thoroughly efficient state to trade dry bulk cargoes” indicates that the vessel has been chartered to carry dry bulk cargoes, including grain in particular. It remains to be seen whether it might be arguable that this excludes carriage of containers (which will in any event depend on the terms of the particular charterparty) and it will be interesting to see whether this is raised in the future.

As discussed below, a conventional dry bulk vessel will need modifications to her design, approvals/permissions, and additional documentation before carriage of containers can be contemplated. In short therefore, a conventional bulk vessel may not be considered cargo worthy or seaworthy as-is, and owners may be able to reject the carriage of containers under a standard dry bulk charterparty.

Where a wide range of trades not specifically including reference to containerised cargo is covered by the charter, the owners would probably not be obliged to have fittings for containers. Of course, that is not the same as an ability to refuse to carry containers, but it does put some of the expense of doing so onto the charterer unless the ship has been expressly chartered for the purpose of carrying containers.

The argument that charterers would be obliged to provide and pay for (and remove, at their cost at the end of the charter period) any modifications required to allow carriage of containers can be further strengthened by the charterparty terms. See for instance NYPE 1993 cl.7: "The Charterers shall provide and pay for necessary dunnage and also any extra fittings requisite for a special trade or unusual cargo …" It seems likely that carriage of containers on a drybulk vessel would be a special trade or unusual cargo. The Baltime form only requires that the ship has fittings “for ordinary cargo service” and again, it seems likely that fittings for containers would fall outside this description on a drybulk ship.

Charterers’ bills of lading – a solution?

Charterers’ bills of lading are signed by charterers as the “carrier” of the cargo, and not on behalf of the owners or master of the vessels. The intended effect is to direct all claims made under the bill of lading to the charterers as the named carrier.

Be that as it may, the owners of the vessel as the physical carrier of the cargo, would be considered the bailor of the cargo during the voyage, with a corresponding obligation to properly care for the goods in their possession. Owners therefore could still face claims in bailment from a cargo claimant. These claims would be governed by the law of the jurisdiction in which they are brought and are difficult to avoid. Owners may wish to consider incorporating Himalaya clauses into the charterparty, as well as an indemnity from charterers into their charterparties, for claims arising from the carriage of containers on deck.

Carriage of containers on dry bulk vessels will, as a general rule, constitute to be an alteration of risk for both P&I and H&M cover. Owners should contact their underwriter to determine if the intended operation will have implication of the insurance cover. The risk evaluation by the underwriter will depend on the merits of each case and will take class and flag approval into account.

Documents submissions: Owners must seek permission from both the vessel’s flag state and classification society if containers are to be carried on a bulk carrier. Class and statutory requirements will possibly be applied on a “case by case” basis and will vary depending on the class society and the flag state administration. The approval process could take a few days especially when done for the first time. According to one estimate, it took class 8-10 days to give final approval for the vessel to take first cargo of containers on a bulk vessel. Furthermore, depending on the requirements of the class, owners may require approval for each voyage prior to loading to ensure that all strength and stability calculations are within the safe margins. Owners should also bear in mind that some port states might require submission of certain documents. Generally, the below listed items will likely have to be documented in order to obtain the necessary approvals which could be per voyage or on a more permanent basis:

Owners should enter in a dialogue with their classification societies and flag states early to better understand the various requirements and approval process. It might also be a good idea to undertake a pre-assessment of the vessel to assess vessel suitability and the extent of modifications required.

We have above highlighted some of the technical and contractual risks for bulk carriers that are involved in a transition to carry containers as cargo. The risks mentioned are by no means exhaustive but give some indications as to what to expect. The below recommendations summarize the key points.

Due diligence of operators: Getting class and flag approvals after making the necessary modifications is only the first step when making a transition to carry containers. Approvals alone would not guarantee safe carriage. For example, crew must be trained and ready for the new operations.

Limitations of the container trade: There are a many lessons to be learned from container vessels for bulk operators wishing to make the transition. Misdeclaration of dangerous cargo, misdeclared weights, improper lashings and poor packaging and securing of the cargo inside the containers are some of the key risks to guard against.

Crew training and familiarisation: Crew who have not had any exposure to carrying containers will need to be trained and familiarized by operators to ensure that the voyage can be executed safely. Some of the areas where this will be particularly important are the loading software, container lashings and navigation.

Apart from above guidance by DNV and Gard, Classification Society Bureau Veritas has developed a formalized approach to support the safe carriage of containers in bulk carriers. The BV Guide paper can be downloaded below (click on image to download): 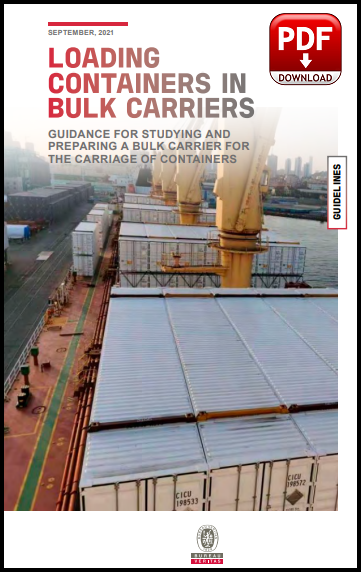