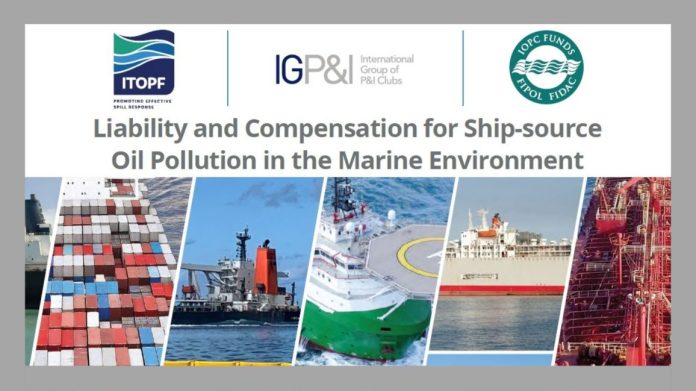 (www.MaritimeCyprus.com) Shipping remains the most effective and efficient means of transport of raw materials, oil, and goods within the global chain of supply and demand. Tankers, bulk carriers, container ships, as well as cruise ships, super-yachts and the myriad of other ship types afloat are designed and operated to higher standards than ever with a prominent regard for safety. As a consequence, the great majority of voyages are completed without incident. Nonetheless, while markedly reduced in number and frequency, incidents do occur that can result in a spill of oil carried as cargo or as bunker fuel.

A spill of oil may result in expenditure and financial loss for a variety of organisations and individuals affected. Despite best efforts, the response to an oil spill can be protracted and costly and oil may contaminate property and the environment with associated economic loss to fishing, tourism and other commercial activities. Those who suffer a financial loss as a result of a spill of oil may be eligible for compensation.

The insurer of a vessel’s third-party risks, usually a Protection and Indemnity Club (P&I Club), provides coverage for pollution damage, including where caused by oil, in accordance with the terms of the insurance. In some circumstances, compensation may be available from a national or international fund.

International conventions enable compensation to be paid to those affected by an oil spill from a ship in countries that have signed the applicable convention and where it is in force. Amongst many advantages, these conventions provide a uniform set of rules governing liability and the admissibility of claims.

Given that shipping is a global industry, it is reassuring that these international conventions are in place in many coastal States and therefore are able to provide a uniform solution for most scenarios of ship-source marine oil pollution. That said, some conventions have not been ratified universally or are not yet in force. In addition, some countries have distinct national arrangements for compensation either in place of, or to supplement, the international conventions. As a result, liability and the availability of compensation can vary.

This booklet provides an overview of the international, and selected national, arrangements in place for compensation of costs arising from pollution damage caused by oil spills from ships in the marine environment, and some background on ‘who pays’. While the focus of the booklet is on spills of mineral oils, non-mineral oils (such as vegetable and animal derived oils) are covered also.

This booklet is intended as an introduction to the subject of compensation for ship-source oil spills rather than as an authoritative account of each compensation regime. It is based on the joint publishers’ experience of applying the provisions of these compensation regimes to incidents around the world over the past five decades, and the assessment of associated claims for compensation. For a more detailed description of the compensation regimes in place, the reader is referred to the references listed in the appendix to this booklet.

The case studies included in this booklet illustrate the importance of a close relationship between those claiming compensation, those paying compensation and technical advisers, who all work together closely during the claims process.

For oil pollution from ocean-going ships, the shipowner may be liable to pay compensation up to an amount set by national legislation. In certain situations, liability may be established through incorporation of a relevant international convention into national law.

Claims for compensation would be made in many instances to the shipowner, with payments made typically by the insurer of the shipowner’s third-party liabilities, usually a P&I Club. In some instances, claims may be made to other parties or brought directly against an insurer. Compensation to supplement money available from the insurer of a casualty may be available from other sources, including international and national funds.

Thirteen primary P&I Clubs provide insurance cover for approximately 90% of the world’s ocean-going tonnage and are members of the International Group of P&I Clubs (IGP&I)1. These P&I Clubs provide cover on behalf of their shipowner and charterer assureds (termed “Members”) for a range of liabilities, including:

The P&I Clubs provide services to their shipowner and charterer Members on claims, legal issues and loss prevention, and play a leading role in the response to casualties. Each P&I Club is owned by its Members and is overseen through a board of directors or a committee elected from the membership. P&I Clubs are non-profit mutual (i.e. cooperative) insurance associations enabling shipowners to share risk and the payment of claims.

ITOPF has published the below booklet on liability and compensation for ship-source oil pollution in the marine environment. This extremely helpful booklet provides an overview of the international and selected national arrangements in place, as well as background information on the different regimes. Click on image to download. 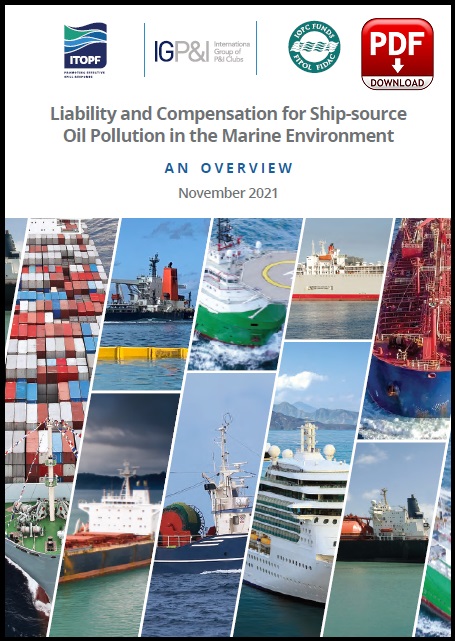