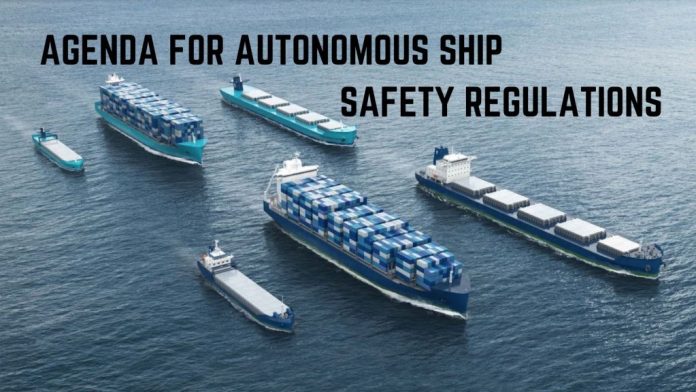 (www.MaritimeCyprus.com) Global shipping is facing at least three decades of momentous change as it adapts to Industry 4.0 and an unprecedented transition to carbon-free fuels that have not yet even been developed for marine applications.

Industry 4.0 neatly describes the challenges faced by shipowners and operators today. It represents the combination of new digital technologies which offer scope for significant efficiency gains, increased transparency and thus improved decision making, and the adoption of operational automation and potentially autonomous ships in the future.

At first sight, the link between the marine fuels of tomorrow and ship autonomy seems remote. But it’s not. None of the fuels currently under consideration, as shipping’s decarbonisation drive gathers pace, are as energy-intense as the hydrocarbons used today. Not only will new fuels be several times more expensive, but in most cases they will also require more storage space on board ship, more frequent bunkering, and more rigorous safety standards and handling procedures.

With no action, shipping’s new sources of power will have a significant impact on ship operating efficiency. Higher costs, less space on board ship for revenue-generating cargo, more time to load fuel… these will all have an impact on productivity.

This is one reason the work of One Sea and its members is so essential. While the end goal may be to facilitate autonomous maritime logistics, the waypoints will establish new systems and procedures, based on the internet-of-things, all of which can contribute to efficiency gains. Individually, the impact may be marginal, but taken together, they have the potential to generate significant contributions to shipping’s climate-related profile.

Another reason, and one which has perhaps been misunderstood, relates to the safety of those working at sea. Indeed, according to One Sea member Kongsberg, autonomous ship technology provides a focus for “removing humans from hazardous working environments onboard vessels, reducing the likelihood of human error by introducing smarter systems that are highly automated and autonomous to various degrees, (and) improving the internal and external situational awareness”.

The white paper from the One Sea Ecosystem outlines the significant contribution autonomous ship technology can make to improving maritime safety and highlights the urgent need for a revised regulatory framework.

The paper examines the safety advances achieved by and expected from autonomous ship technology, with the aim of driving the consultative process forward towards a revised set of maritime regulations. It considers today’s safety framework, cybersecurity, views from ship owners and operators, consequences for labour and insurance, and the classification implications for varying levels of autonomy, before offering a proposal for next steps by the industry.

In his foreword, Capt. Eero Lehtovaara, Chairman of One Sea, writes: “Not only can autonomous ships greatly contribute to increasing productivity, bolstering sustainability and improving working conditions at sea; direct and powerful contributions to enhancing maritime safety have also been identified.

“Technology advances however are dependent on regulatory frameworks. As a group of technology pioneers with some of the world’s most distinguished marine automation technology innovators and enables, One Sea has considerable knowledge and expertise to share as new rules and regulations are developed.”

The need to develop harmonised international safety rules covering autonomous ships is now pressing, the paper goes on to argue. As a priority, One Sea seeks to engage regulators, insurers, representatives of maritime labour, training establishments, flag administrations and classification societies in the dialogue that to shape the future of autonomous shipping to the satisfaction of all.

One Sea Senior Ecosystem Lead, Päivi Haikkola, comments: “Our aim at One Sea is to assist in the development of safe autonomous systems in global shipping that could lead towards an effective operational maritime ecosystem by 2025. Collaboration between all stakeholders in the field is essential to address the challenges of digitalisation and the development of autonomous systems.