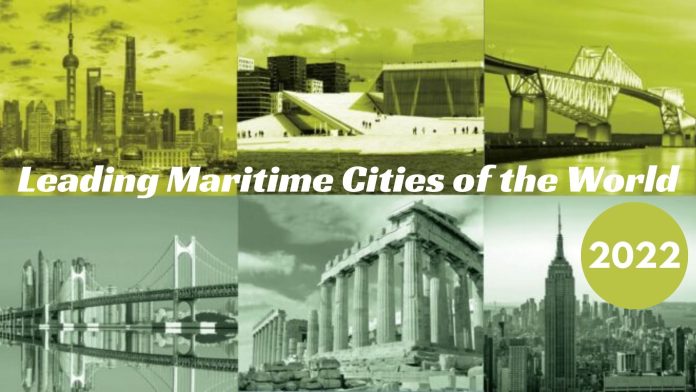 (www.MaritimeCyprus.com) There have been some dramatic developments since the last edition of the Leading Maritime Cities of the World (LMC) report was published in 2019. For one, we have been living with the pandemic. Ships have been stuck in ports, seafarers have been marooned on ships, there have been cargo delays, and container rates have hit the roof. But despite all this, the global economy is still in surprisingly good shape.

Climate change is a key future challenge for maritime megacities

There has been a marked shift in climate sentiment generally and in the maritime community particularly. We are still far off emissions-reduction targets set by IMO, the EU and national authorities, but the pace of technological progress is phenomenal. Shipowners, charterers, cargo owners and lenders are gearing up for a decarbonized future, with the rapid adoption of zero-carbon fuels expected in the next 10 to 15 years. Ongoing digitalization, including ports and the supply chain, will support the green transition and supercharge efficiency across the industry.

Considering the developments in recent years and where the maritime industry is heading, which cities around the world offer the best soft and hard infrastructure, and access to world-class talent and services, to help local maritime communities adapt, connect and prosper?

“Maritime cities and clusters are generating unique strategies to cope with these global transformations,” says DNV Maritime CEO Knut Ørbeck-Nilssen. “They will play a leading role in the green shift, with new business models that drive the transition.”

The LMC report is compiled in cooperation between DNV and consultancy Menon Economics. Previous editions have not only attracted attention within the maritime community, but also raised awareness among the general public of the maritime industry’s importance as a cornerstone of global trade.

“The 2022 analysis uses some new and more comprehensive objective and subjective indicators, as well as data sources, for each pillar to ensure it is based on full and reliable data. This facilitates more refined benchmarking of the relative performance of each city compared to previous reports. New objective indicators include key developments in the green transition and carry a stronger weighting relative to subjective indicators,” says Menon Economics partner Dr Erik W. Jakobsen, who is the co-author of the report.

The report reveals the perceptions and assessments of 280 invited business executives – mostly shipowners and managers – from around the world. Around 50% of the nominees are based in Asia, 25% in Europe and the remainder in the US, Middle East and Africa.

Singapore’s strong performance across the board sees it ride out the pandemic to retain its number one spot overall. However, top positions in the five pillars have changed.

“Singapore holds the top spot for Attractiveness & Competitiveness while also scooping the Maritime Technology title based on a consistent strategy focusing on innovation, start-ups and digital investments. Singapore gives way to Athens and Shanghai in Shipping and Ports & Logistics, respectively, and losing some ground in Maritime Finance & Law, where it has slipped from fifth to eighth place,” says Dr Shahrin Osman, Regional Head of Maritime Advisory at DNV, who is based in the Lion City and is the report’s lead author.

Following Singapore, another two Asian cities and two in Europe feature in the top five overall. Rotterdam’s ascent continues as it shoots into second place. “Although only tenth in Shipping and with no number one positions, the Dutch hub scores well generally and particularly in Ports & Logistics and Attractiveness & Competitiveness,” says Shahrin.

London is also up, from fifth to third place overall, although it loses its only previous top spot in Maritime Finance & Law to New York.

Fourth and fifth places overall go to Shanghai and strong all-rounder Tokyo, which has always scored well on objective indicators. Hong Kong slides from fourth to sixth place overall and out of the top five in Shipping and Maritime Finance & Law.

“Athens is back atop the Shipping pillar, followed by Singapore, Tokyo and Shanghai. Hamburg’s fifth place on that ladder is its only top five position this year, having slipped to ninth place overall. New York steams into the lead in Maritime Finance & Law, followed by London, Tokyo and Oslo. Oslo and Busan follow Singapore in Maritime Technology while Shanghai wins in Ports & Logistics, overtaking Rotterdam, Hong Kong and Singapore,” says Shahrin. 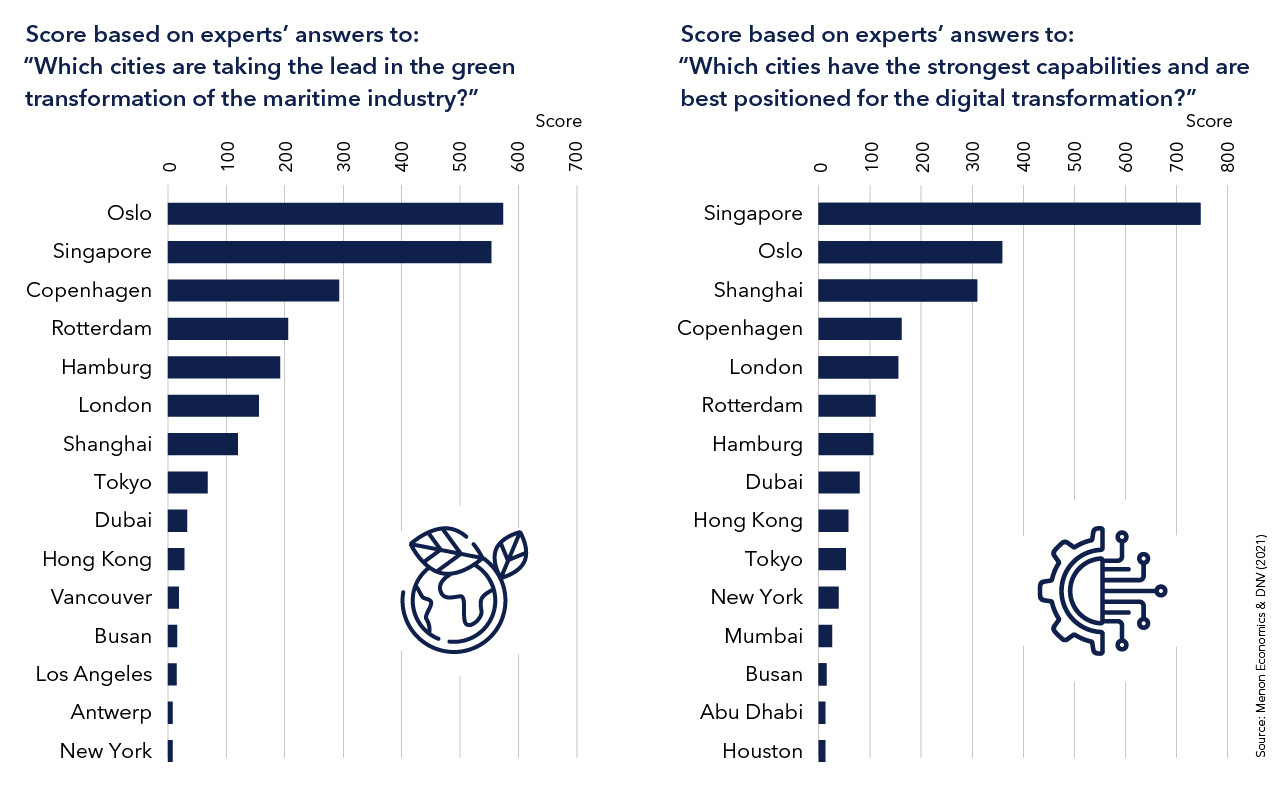 Maritime & Port Authority of Singapore (MPA) Chief Executive Quah Ley Hoon comments: “Maritime Singapore has shown itself to be resilient despite the challenges of the pandemic over the past two years. It is a testament of the strong partnership between the government, industry and unions.”

She points out that the maritime industry is at the “beginning of an S-curve” when it comes to decarbonization and digital transformation, with the pandemic accelerating the move to remote and automated operations.

“Besides profiling exciting careers at sea and onshore to young people and experienced professionals from other sectors, we are also looking at how to work with stakeholders to promote a more resilient global supply chain,” Ley Hoon says. That requires data harmonization and interoperability between supply chain and regulatory systems to enable the shipment of goods to be as seamless as possible – including one-stop port clearance, cargo declarations, e-bills of lading, e-bunkering and just-in-time services to enhance efficiency at ports.

Together with the Singapore Shipping Association (SSA) and stakeholders in the maritime innovation ecosystem, the MPA is actively engaging and incentivizing maritime SMEs in digitalization. This includes the development of a maritime digitalization playbook to improve productivity and seize growth opportunities. “I believe the adoption of new technologies like IoT, AI and 5G and even remote operations and additive manufacturing will create a competitive edge for maritime companies. We are actively supporting the innovation ecosystem and aspire to be the MarineTech hub for the maritime industry. It’s exciting and a timely move today,” Ley Hoon adds.

The invited experts predict that Singapore will remain number one five years from now, with Shanghai growing in importance as runner-up. London, Oslo and Rotterdam are seen as leading the field in Europe, with Dubai and Abu Dhabi, both in the UAE, competing hard for pole position in the Middle East, India and Africa region. “The omens are promising especially for Dubai, which is now ranked 13th but predicted to grab sixth place overall by 2027, ahead of Hong Kong, Hamburg and Copenhagen,” says Shahrin. 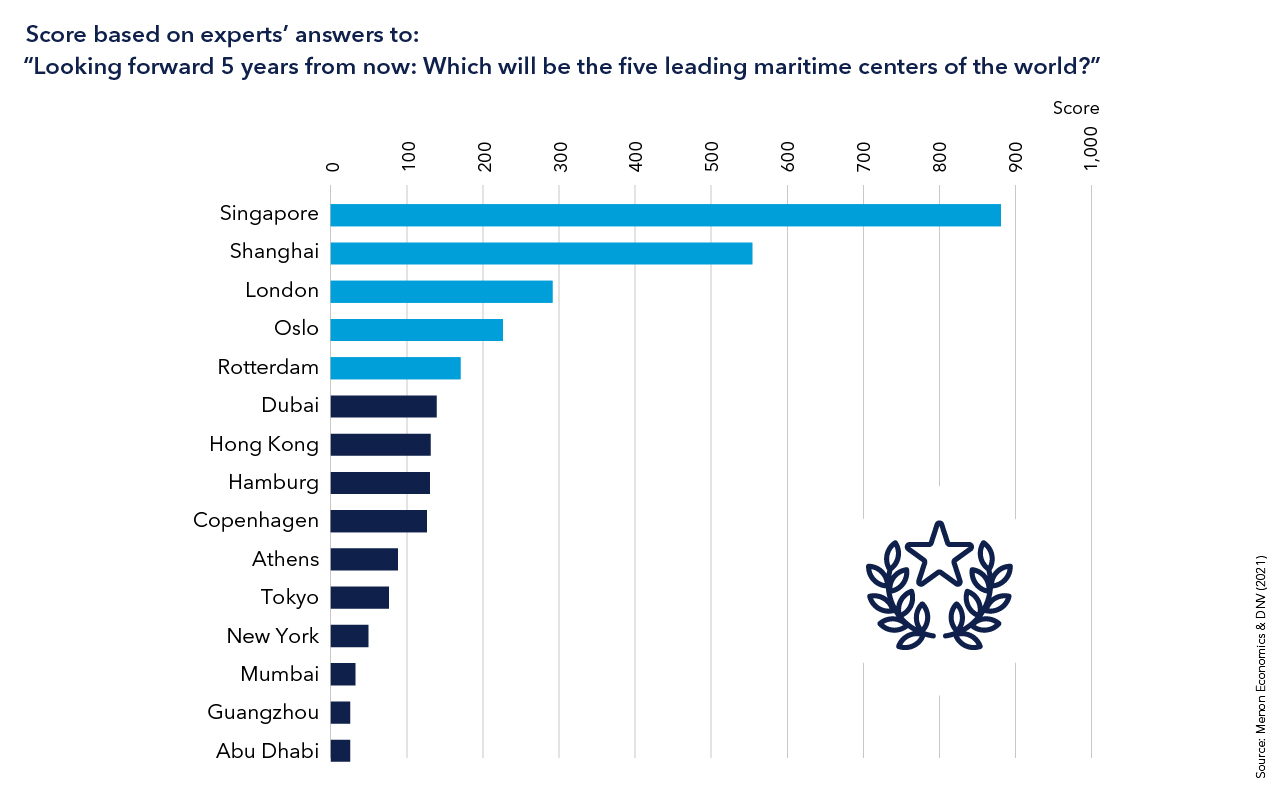 Singapore, Oslo, Shanghai and Copenhagen are perceived as the best-prepared cities for the digital transformation of the maritime industry, including the introduction of disruptive technologies. Oslo tops the list in sustainable technologies and solutions for the oceans, followed by Singapore and Nordic counterpart Copenhagen.

For more details, you can download the report below: