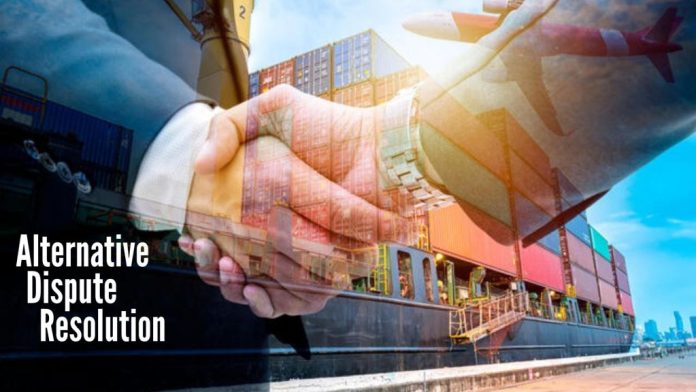 (www.MaritimeCyprus.com) Commercial disputes and court and arbitration proceedings that follow can be very time-consuming and costly – and can risk damaging an otherwise fruitful business relationship between the parties. This article, based on interviews with shipping experts, explains what alternative dispute resolution (ADR) is and why you should always plan for it in contract negotiations.

Attempting to resolve shipping disputes by mediation instead of going to court is increasingly popular. While many disputes end up in court or arbitration, there are several different forms of alternative dispute resolution which parties can usefully consider as alternatives.

The best known type of ADR is mediation but other forms such as Early Neutral Evaluation and Early Intervention have also gained popularity in recent years.

ADR can be a viable way forward in a wide variety of shipping disputes, regardless of the subject matter and whether the dispute is large or small. The size of a dispute need not reflect its complexity and time and cost savings apply in all cases. ADR can be undertaken much more easily, quickly and cheaply than a court case that can drag on for a long time. It can also be suitable if arbitration proceedings have come to a standstill because the parties have become entrenched in opposing positions: a neutral mediator can help bring them together. Other aspects of mediation, such as confidentiality and flexibility, are also relevant.

“An important benefit is that the parties can avoid damaging their business relationship. An impartial person taking an unbiased look at the case can sometimes get one or both parties to move to a compromise,” says Henning Babiel, Master Mariner/Legal Counsel at ADM Germany.

As opting for mediation is an active choice by the parties, agreeing to use mediation from the outset often fosters a greater commitment to both reaching an agreement and complying with it afterwards. Even if the mediation process does not lead to an amicable settlement, it can still be valuable because the mediator helps both parties gain a better understanding of the merits of their respective positions.

How does it work?

Traditional mediation involves the appointment of a mediator by the parties, often when disputes have reached a fairly advanced stage in court or arbitration and the issues are well known to the parties. Mediation can take place face-to-face or online.

The purpose of such discussions is to open the parties’ minds to a wider perspective than their own and allow them to appreciate any weaknesses in their own position. This can be of help in resolving the matter in a way that considers commercial objectives as well as the legal merits of the dispute. The solution need not be purely financial – it could involve other factors such as the extension of a contract, or an agreement to enter into future business arrangements.

Another type of ADR, Early Neutral Evaluation, differs from mediation in that it gives the parties an informed assessment of the strength of their positions in a dispute. It can be a reality check for the parties in deciding whether to progress a claim.

“The objective of Early Neutral Evaluation is to give parties a realistic indication of the merits of their respective cases to help inform the negotiations between them and, if the Evaluator considers it appropriate, to put forward a figure or range for settlement”, says Clive Aston, Arbitrator at the London Maritime Arbitrators Association.

Early Neutral Evaluation is typically a non-binding form of ADR which is usually conducted on documents only, and without the need for a hearing with the parties present. It can take place at any stage of a case but is often used at an early stage in a dispute in the hope of avoiding the need for any more formal type of dispute resolution.

A very informal and party-led process is Early Intervention. Here, the mediator will have separate discussions with each party in order to explore and better understand their position. Suggestions are then made as to areas of common agreement/disagreement with a view to better identifying the issues at the crux of the dispute.

Sometimes, there will be shuttle diplomacy by phone as the mediator seeks to probe the strengths and weaknesses of each party’s claim/defence and to narrow the gap between the parties. In other cases, the mediator may ask a party to provide written comments on the other party’s arguments. Such comments will only be passed on with the party’s consent. The mediator will usually make suggestions as to potential offers which a party may wish to consider with the ultimate aim of reaching a settlement that both parties can live with.

“Early Intervention is particularly useful for claims where there is a risk that the size of the claim can be outweighed by the costs involved in pursuing arbitration or where a case will turn on witness or expert evidence which would result in an expensive “winner takes all” outcome if the matter were to continue through to an Arbitration Award. It is also beneficial in circumstances where the parties have taken intractable positions which an Early Intervention with a neutral mediator can hopefully cut through to enable the parties to reach an amicable resolution ,” says Andrea Skeoch, Deputy Director (FD&D) at North Group.

A standard fit for purpose

BIMCO has developed a standard clause for inclusion in charter parties and other contracts. It encompasses all types of ADR and can be used at any time of a dispute, ie before and after arbitration proceedings have commenced. It is a short and simple provision by which the parties can solve disputes amicably and at an early stage, in view of the significant time and costs associated with court and arbitration proceedings.

“By requiring a party to give reasons for refusing to take part in ADR and encouraging the tribunal/court to take such a refusal into account when assessing costs, this will hopefully encourage parties to consider ADR at an early stage before costs begin to increase,” says Simon Spark, acting Deputy General Counsel at Oldendorff Carriers.

Including the new ADR clause in contracts means that there will already be a framework in place for resolving any potential disputes before they arise. This in turn will speed up resolution and save time and costs.

Who can help you if you want to engage in ADR?

In addition to the parties, an ADR process will normally involve the parties’ lawyers and sometimes also their P&I Clubs. On occasions, experts may also be appointed to facilitate the parties’ and the mediator’s understanding of relevant technical issues.

The BIMCO Mediation/Alternative Dispute Resolution (ADR) Clause 2021 has been developed for inclusion in charter parties and other contracts. It makes it possible for the parties to solve disputes via ADR and in particular mediation, early neutral evaluation and early intervention.