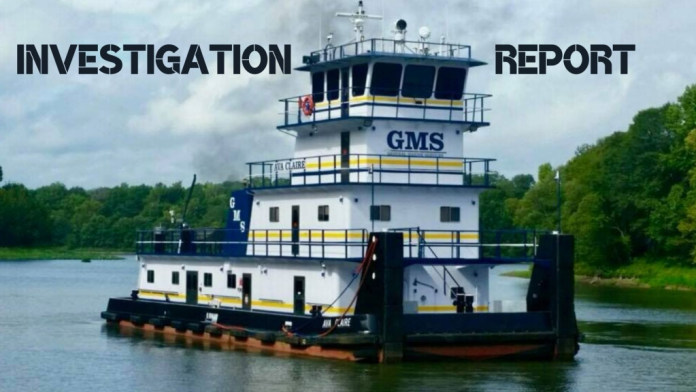 (www.MaritimeCyprus.com) All Seafarers know about the hazards of fatigue, but do you know what sleep inertia is and how it could affect workers for 30 minutes or more after waking?

Sleep inertia is that temporary feeling of grogginess felt immediately upon awakening, according to a National Transportation Safety Board (NTSB) investigation report.

This state usually lasts for about 30 minutes after waking but could last longer if a person is sleep deprived.

The US National Transportation Safety Board (NTSB) recently released its marine investigation report detailing the March 22, 2021, allision between the mv. Ava Claire’s lead barge and gate No. 3 at Leland Bowman Lock, near Intracoastal City, La.

At the time of the incident, the mv. Ava Claire, owned by Baton Rouge, La.-based General Marine Services, was transporting a pair of tank barges, each loaded with 53,166 barrels of naphtha. The Ava Claire departed from the Valero St. Charles refinery on the Mississippi River in Norco, La., at about 3 p.m. March 20, 2021, and headed southbound. The vessel later entered the GIWW at Algiers Lock in New Orleans and headed west on the canal, bound for the Valero Port Arthur refinery in Port Arthur, Texas.

The captain and pilot aboard the mv. Ava Claire followed a six on-six off schedule, with the captain’s daily watch going from 6 a.m. to noon and 6 p.m. to midnight. On the morning of the allision, the captain awoke sometime between 5 a.m. and 5:15 a.m. and went to the wheelhouse to begin his watch early, according to the NTSB. When he did so, the tow was nearing Leland Bowman Lock.

According to the report, General Marine Services’ operations manual prohibits a change of watch during a “critical move,” which includes manoeuvres involving bridges, locks and docks. The pilot who was going off watch offered to take the Ava Clair through the lock, but the captain declined and took over about five minutes before entering the lock. Before leaving the wheelhouse, the pilot noted that he had been having trouble communicating with the deckhand via handheld radio. The deckhand was positioned on the bow of the lead barge, spotting as the tow approached the lock.

According to AIS data, the Ava Claire was moving at 5.2 mph. when it was 0.2 miles from the lock at 5:16 a.m. Three minutes later, as the lead barge entered the lock’s eastern gate, the vessel had slowed to 4 mph. The western gate was closed.

The captain said the lockmaster at Leland Bowman usually instructed vessels to “bring it all the way to the gate,” which meant bringing the lead barge of a tow to within 50 feet of the closed gate, with the deckhand on the lead barge calling out distances. On the morning of the incident, though, two issues made that difficult for the captain. First, the handheld radios were malfunctioning. Second, the captain told the NTSB that “the GPS feed to his electronic chart system (ECS) failed, denying him his primary source of speed indication.” With both of those factors at play, the captain had to gauge speed through the side windows and distance through the forward windows. The report also noted the possible presence of current astern that could have affected the vessel’s forward movement.

Radio communications cleared up when the head of the tow was about 250 feet from the closed gate. At that point, the Ava Claire was moving at 3 mph. With 200 feet to go, the captain moved the engines to “full astern,” but the tow didn’t stop in time. The lead barge struck the northwest gate at 5:22 a.m. with a forward speed of 1.2 mph.

The lead barge was dented in a maximum of 1.5 inches and did not require repairs. Neither the other barge nor the Ava Claire incurred any damage. Gate No. 3 at Leland Bowman, though, suffered damage to the steel plating, internal framing and sections of the rack, which were all bent inward about a foot. According to NTSB, the gate “was also knocked out of alignment, preventing it from being fully opened.” The gate has not been repaired. Damage is estimated at $2.5 million.

The NTSB report also noted that, while the captain aboard the Ava Claire had a decade’s experience working on the GIWW, the past 6.5 years had been aboard 2,600 hp. vessels. The captain had only been on the Ava Claire for about 1.5 months and had not piloted it on the GIWW, where vessels react differently than on the river. According to the NTSB, “the captain’s limited familiarity with operating the lower-horsepower Ava Claire” on the GIWW “may have contributed to a misjudgement of the timing and magnitude of the engine commands needed to slow the tow as it entered Leland Bowman Lock.”

Besides the communication challenges with the deckhand, the failed GPS feed and the captain’s unfamiliarity with the Ava Claire, NTSB settled on the captain’s post-sleep time on watch as the most likely cause of the allision. “Sleep inertia” is defined as “the temporary feeling of grogginess felt immediately upon waking up,” and it can impair “an operator’s performance, vigilance, alertness and decision-making for 30 minutes or more after waking,” according to the report. If the captain had followed company protocol for watch changes, he would not have been at the sticks so soon after waking up, the report said.

The NTSB included a “lesson learned” section in its report, which recommended allowing 30 minutes or more after waking up before coming on watch.

“Mariners should allow time to fully recover from sleep inertia before taking a watch and performing critical duties,” the report concluded.

For more details you can download the full investigation report below: