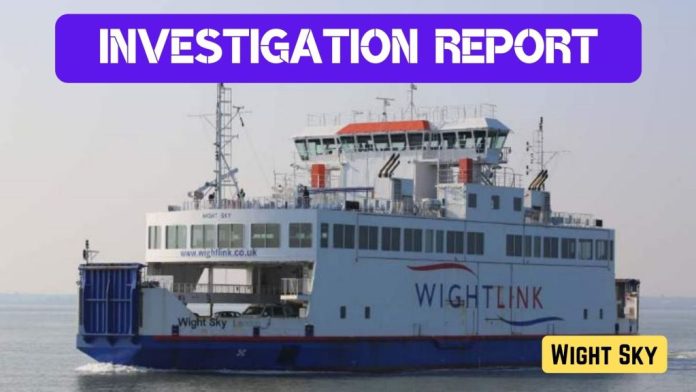 On this occasion, the failed engine had been in operation for just 389 hours. Wight Sky was one of three sister ferries operating between Lymington and Yarmouth. Following the third engine failure the ferry owner, Wightlink Ltd, withdrew its Wight Class ferries from service. After discussions between the ferry owner, the Maritime and Coastguard Agency, Lloyd’s Register, and the engine manufacturer Volvo Penta, a mitigation plan was put in place to enable the ferries to return to service.

The initial mitigation measures included weather and engine load constraints, enhanced engine monitoring and shutdown procedures, and restrictions on personnel entering the engine rooms when the main engines were running.

This investigation found a history of engine failures across the Wight Class feet while operating on the route, dating back to 2010. As a consequence, the scope of the investigation expanded to include all known failures, leading to a long and detailed  technical investigation that comprised forensic examination and testing of five of the failed engines and their components, a full review of the vessels’ system design and operation, and the safety management, planned maintenance and condition monitoring procedures, together with manning and technical oversight. In May 2019, the MAIB published an interim report of its initial findings.

Although Wight Sky’s catastrophic main engine failures had similar consequences, the complex circumstances that led to them differed. However, many of the underlying factors that contributed to the Wight Sky and other Wight Class engine failures were similar and included insufficient technical oversight of engine operating parameters, maintenance
management, quality control and engine component and auxiliary system design.

This was exacerbated by a lack of engine maintenance and condition monitoring ownership, which resulted in long-standing reliability issues that were either unidentified or unresolved.

Wightlink Ltd and other stakeholders have taken several actions following their internal investigations and in response to recommendations made in previous MAIB reports. Since December 2018, the ferries have successfully operated without any catastrophic engine failures. RK Marine Ltd, the local service centre contracted to undertake most of the Wight Class ferry engine overhauls, has had its authorisation as a Volvo Penta Centre dealer removed by the engine manufacturer.

Recommendations aimed at addressing specific issues that remain unresolved by the
actions already taken have been made to Wightlink Ltd, Volvo Penta, Lloyd’s Register and
RK Marine Ltd.

For more information, download the full investigation report below: