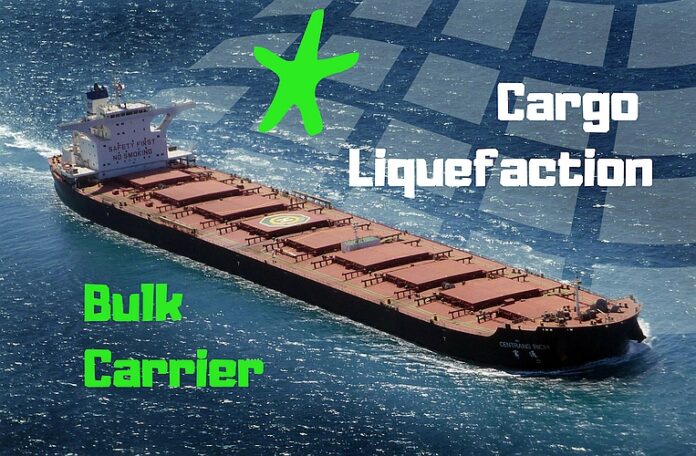 The known or suspected cause of these tragic losses has been liquefaction of cargo. In all but one case, the lost ship was carrying one of three cargoes: iron ore fines; nickel ore, or bauxite. Hui Long was carrying a cargo of fluorspar mineral. These are all classified as solid bulk cargoes – granular materials loaded directly into a ship’s cargo holds. These cargoes actually consist of two phases because invariably there is water present within the granular material. The water may have accumulated during mining and processing, during storage (generally in piles on the ground exposed to the weather) while awaiting loading on the ship; or during or immediately after loading if precipitation occurs. During the time that the ship is at the pier or transiting through calm water, the cargo is quite stable.

In an open seaway and particularly during heavy weather, the cargo becomes subject to significant stresses. Those stresses lead to an increase in the water pressure. When the water pressure exceeds the pressure of the granular cargo, the mass can liquefy. This liquefaction can start in a small portion of the cargo and rapidly spread, resulting in a sudden shifting of the entire mass. When this occurs on a modern bulk carrier with huge cargo hulls, the ship is subject to severe listing. If not corrected quickly, the ship can capsize, often so fast that a distress signal is not sent.

The International Maritime Organization (IMO), ship insurers, and trade associations (such as INTERCARGO) have been working for a number of years to minimize the risks involved in the transport of these solid bulk cargoes. The IMO issued circulars and resolutions and has amended the Safety of Life at Sea (SOLAS) Convention to institute mandatory measures regarding such shipments.

The IMO initially adopted the Code of Safe Practice for Solid Bulk Cargoes (BC Code) in 1979 as recommended guidance for ship owners and masters. In 2008, it was replaced by the mandatory International Maritime Solid Bulk Cargoes Code (IMSBC Code). The aim of the IMSBC Code is to facilitate the safe stowage and shipment of solid bulk cargoes by providing information on the dangers associated with the shipment of certain types of cargo and instructions on the appropriate procedures to be adopted.

Bulk carriers continue to be lost at sea despite these efforts. One of the problems is that while the IMSBC Code prohibits the master from loading bulk cargoes the Transportable Moisture Limit (TML) and Moisture Content (MC) of which exceed certain limits, the certification of the TML and MC, as well as the exact identification of the cargo are provided by the shipper. The master has minimal capability to challenge those certifications. Some experts contend that the current IMO approach is too simplistic. Liquefaction potential depends not just on how much moisture is in a bulk cargo, but also on other characteristics, such as particle size distribution, the ratio of the volume of solid particles to water, and the relative density of the cargo, as well as the method of loading and the motions of the ship during the voyage. Some of these latter factors may be beyond the capability of the master to determine.

There is, though, another approach that can be taken to minimize the risk of catastrophic liquefaction of solid bulk cargoes. A smaller cargo hold would mean that any liquefaction of the cargo in that hold would have less impact on the stability of the ship. Rather than reduce the overall size of the vessel, a longitudinal bulkhead could be installed to divide each current cargo hold, which now extends the breadth of the ship from port to starboard, into two smaller holds. This may not be practical for existing bulk carriers, but would not present a technological challenge for new construction. This would be the bulker equivalent of the double hull that has proven so successful for tankers. While construction costs would be marginally higher and the loading and discharge of cargo would be somewhat slower, compare that with the ships, cargoes, and lives that would be saved.

In addition to the above, you can find below Operational guidance for vessels that carry cargoes which may liquefy, provided by the London P&I club (click image to download): 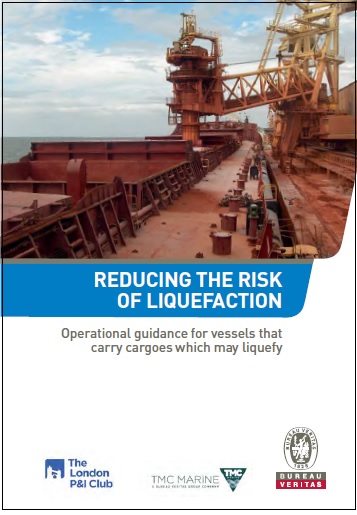