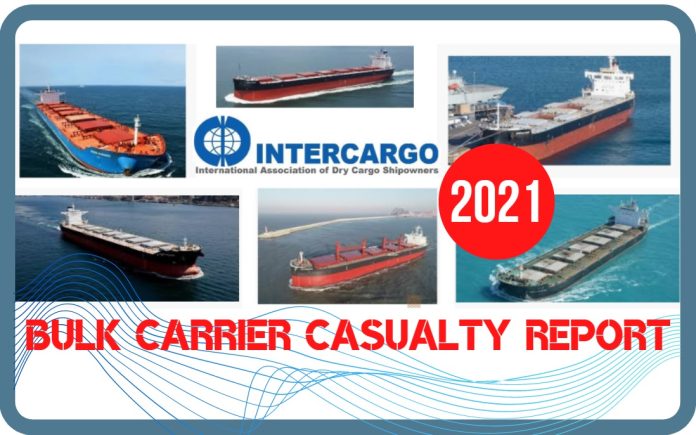 (www.MaritimeCyprus.com) INTERCARGO, the International Association of Dry Cargo Shipowners, recently submitted their Bulk Carrier Casualty Report on the years 2012-2021, to the International Maritime Organization (IMO) for the consideration of the Member States, Non-Governmental Organisations and other interested parties. This report details the trends and availability of casualty investigation reports as well as breaking down total losses by cause, bulk carrier size, age, and dead weight tonnage (DWT).

Grounding was the most common reported cause of bulk carrier losses from 2012 to 2021, with 13 casualties, representing 48.1% of total losses. The investigation reports available highlight that human error both operationally and in navigation contributed to the majority of the 13 casualties.

The loss of the 2016-built very large ore carrier (VLOC) STELLAR BANNER while carrying iron ore in February 2020 off the coast of Brazil, suggested that there were serious issues related to the effectiveness of the Company's navigation and watchkeeping procedures among other considerations.

The grounding and the subsequent break-up of the 2007-built Newcastlemax bulk carrier WAKASHIO was reportedly "most probably a result of 'human factors"'. The most likely cause is that as the vessel passed five miles south of Mauritius the crew was distracted by their search for a phone signal, communicating with their families, and inadequate monitoring of the ECDIS. This incident suggests inadequate ISM procedures and insufficient guidelines on performing navigation in a safe manner.

Of the five Bulk carrier casualties which occurred as a consequence of cargo liquefaction, four vessels carried nickel ore and one carried Bauxite. They represented 18.5% of the total casualties over the last 10 years. Those casualties led to the loss of 70 seafarer lives (76.1% of the total loss of life).

Learning lessons from incidents and casualties and sharing of experience have proven to be effective approaches to raise safety awareness. It is vital to deepen understanding and knowledge of existing rules, regulations and skills. However, it appears that currently there is a significant delay between the time at which a report, or an initial report is submitted by an accident investigating organisation and when that information becomes publicly available.

Continued focus on safety awareness and safety measures helps to close gaps in understanding and reduces the potential for similar casualties involving bulk and ore carriers.

The bulk carrier industry should not be reluctant to make bold changes to ship design in order to further improve the safety and survivability of dry bulk vessels. Flag state reports of casualties must question and strive to alter existing SOLAS, MARPOL, LOADLINE, IMSBC Codes and conventions if crew lives are to be saved.