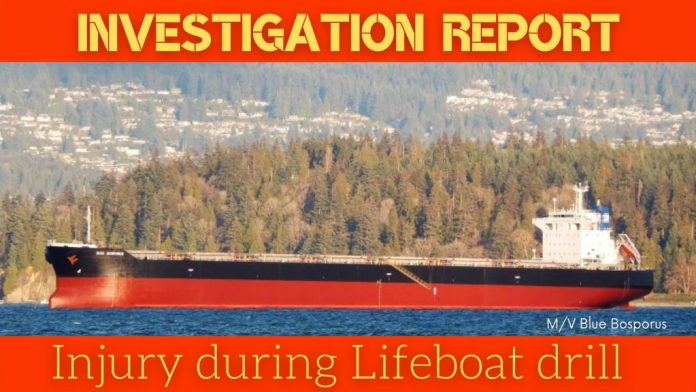 (www.MaritimeCyprus.com) On 01 December 2020, the crew on the bulk carrier Blue Bosporus were carrying out a free‑fall lifeboat drill at Anchorage 12 in English Bay, British Columbia, when the wire rope slings holding the lifeboat failed and it fell approximately 14 m to the water. There were 2 crew members in the lifeboat at the time. Both crew members were seriously injured and were transferred to hospital. The forward starboard side of the lifeboat’s hull was damaged.

On December 1, 2020, the crew of the bulk carrier Blue Bosporus were carrying out a free-fall lifeboat drill at anchor in English Bay, British Columbia. After the four wire rope slings for lowering away the free-fall lifeboat were attached, the third mate and an AB went aboard the boat to conduct a test launch. The third mate activated the release hook, and the lifeboat slid forward about 25cm. At that point, three slings connecting the boat to the davit failed, along with the bracket connecting to the fourth sling. The boat fell 45 feet into the water.

Both crewmembers aboard were seriously injured - one with leg injuries and one with an injured hand - and they were taken to a hospital for treatment. The boat's hull sustained damage where it struck the water. Most (but not all) of the broken sling components were retrieved for analysis.

A post-accident investigation found that the crimp sleeves on the slings had weakened over time due to stress corrosion cracking - a common problem for stainless steel. In addition, one of the slings was shorter than the others, meaning that it took the full load of the boat when the hook was initially released. This sling failed first, followed by the others in sequence.

The crew were under orders to exit the lifeboat after releasing the hook, before the boat was lowered into the water using the davit - a practice consistent with IMO guidance.

However, they still needed to be present in the boat in order to release the hook. They were in the practice of standing without securing themselves to the seats while carrying out this task. "There had been no assessment of the risk associated with standing unsecured in the lifeboat when it was suspended by its slings," TSB concluded.

The vessel's maintenance schedule did not specifically cover inspecting the condition of the slings, according to TSB. After the casualty, the shipowner installed new load-tested sling assemblies and brackets, and it sent a safety circular to update its requirements for lifeboat inspections and drills.