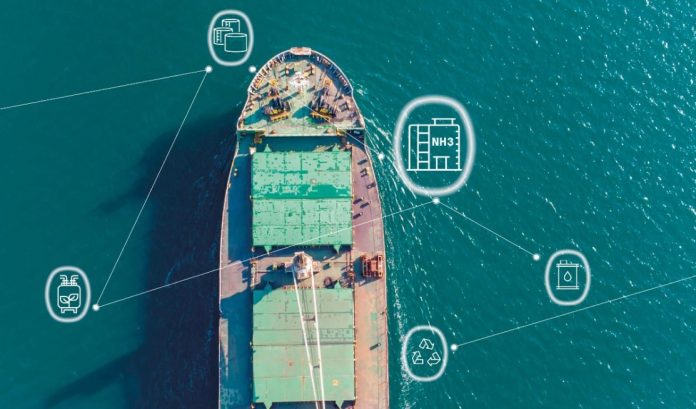 (www.MaritimeCyprus.com) As a marine fuel, ammonia holds the advantage of releasing no CO2 emissions into the atmosphere when consumed. When produced renewably – meaning that the processes behind ammonia production, such as electrolysis, use clean energy sources – it can even be a zero-emissions fuel. Because of this, ammonia has enormous potential to contribute in the long term to the net-zero shipping industry.

However, the safety risks associated with ammonia as fuel are considerable. Ammonia is toxic to humans, and exposure beyond a certain amount of time and level of intensity can have serious health consequences for crew members and other people onboard. For ship owners and designers, this represents a challenge: how to safeguard life from accidental ammonia leaks during ship operations and bunkering? Such risks must be addressed – along with challenges like developing power conversion technologies – before ammonia becomes a deployable fuel alternative.

A JOINT PRELIMINARY STUDY OF AMMONIA

As specifically ammonia-powered engines and propulsion systems are still being developed, Bureau Veritas and Total Energies began by benchmarking ammonia’s problematic concentrations in air, comparing them to LNG. An LNG-fuelled tanker served as the model for the comparison, and showed a stark contrast between the two fuels. LNG becomes dangerous at its lower flammability limit, around 50,000 parts per million (ppm), while ammonia has negative health effects at only 30 ppm when permanently exposed, or around 300 ppm when exposed for one hour. Based on this, Bureau Veritas noted that unless modifications are made to design, safety distances should be much greater for ammonia than LNG. This justified BV NR671 approach with more stringent leak management on-board and vapor gas processing to avoid even small leaks reaching manned areas.

With this in mind, Bureau Veritas and Total Energies explored multiple ways to model leaks, and assess their effects on passengers and crew members. Experts evaluated different scenarios regarding the frequency and volume of leaks for single wall and double wall containment, as well as during bunkering operations. The study accounted for the thermodynamic properties of leaked ammonia and used high-end engineering tools to determine leaks’ changing flows and concentrations. Key areas studied included:

To help de-risk ammonia as a marine fuel, BV said it is building on the tried-and-tested approach that was used over the last decade to propel the development of LNG as a fuel.

Commented Laurent Leblanc, senior vice president technical and operations at BV Marine and Offshore: “While further experimentation and analysis are required to reach definite conclusions, this preliminary study helped identify future areas to explore for de-risking ammonia as a fuel.

“Until technology development can eliminate ammonia leaks completely, leak mitigation and treatment remain the best course of action for shipowners and designers. Our preliminary study with Total Energies forms a strong basis for further industry collaborations. By pairing the right questions with the right tests, marine stakeholders can begin the journey to de-risking ammonia as a fuel, as they did for LNG.”

In addition to this study, BV is working to help develop the world’s largest ammonia-fuelled ammonia-carrier (VLAC) and is classing two future ammonia-fuelled vessels with its ammonia-prepared notation, including two liquefied petroleum gas carriers.