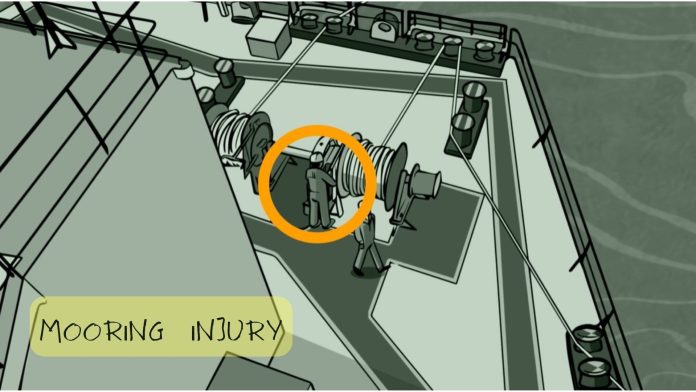 (www.MaritimeCyprus.com) Most mooring line accidents occur as the result of unexpected and violent mooring line movement. Lines can move for a number of reasons such as becoming snagged and snapping free, being mishandled on the drum or strong point, or simply breaking. Snagging conditions can develop due to surface defects on the dock or ship, or by simply having the mooring line in an unsafe location, to begin with.

This animated video depicts a mooring accident that occurred when a bulk carrier was discharging cargo alongside a mineral terminal. While repositioning the vessel astern the terminal, using only mooring lines and with the engine on stand-by, the master became concerned the vessel was developing excessive sternway.

On the poop deck, an able seaman tightened up the back spring winch brake and as the strain came on the rope, it parted with one end of the rope snapping back, violently striking the second officer. The injured seaman suffered broken ribs and serious internal injuries.

For more guides and resources on Safe Mooring, Click HERE