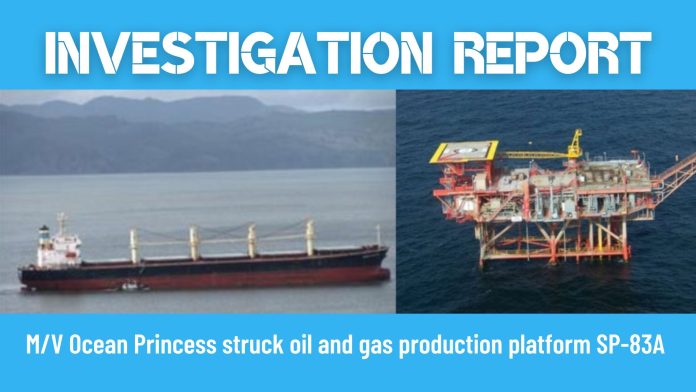 (www.MaritimeCyprus.com) The US National Transportation Safety Board said that “poor bridge resource management and a charting error” led to a Hong Kong-flagged 52,382 DWT bulk carrier striking an oil and gas production platform in the Gulf of Mexico.

Reading the full report to see how the NTSB reached that finding is instructive, with fatigue, distraction and over-reliance on ECDIS all coming into consideration.

On January 7, 2021, the dry bulk carrier Ocean Princess struck the uncrewed/out-of-service oil and gas production platform SP-83A while operating 24 miles south of Pilottown, La. No pollution or injuries were reported.

Damage to the vessel and platform totaled an estimated US$1.5 million.

​The 24-person crew of the Ocean Princess was drifting overnight in the Gulf of Mexico before going to New Orleans to load a cargo of grain. The master planned to drift throughout the night with the engine on 15-minute standby, keeping clear of traffic and platforms.

To give the crewmembers rest time after cleaning cargo holds during the day, the master scheduled himself to be on the bridge with the mate on watch, supplementing the watch and the duties of the lookout. After engaging the engine to maneuver the vessel, the master stated he saw a dim yellow light and checked the radar. The master and the second officer on watch investigated the light and believed it was coming from an oil platform 5-6 miles away. Roughly 10 minutes later, the Ocean Princess struck platform SP-83A.

The master and second officer told NTSB investigators they never saw SP-83A on the radar. After the contact, both noted that the platform was on the paper chart used on the bridge by the mate on the watch, but SP-83A did not appear on the electronic chart display and information system (ECDIS).

Platform SP-83A was not charted on the official U.S. electronic or paper navigation charts that provided the chart data to the ECDIS aboard the Ocean Princess. The platform did appear on the British Admiralty paper chart that the mate on watch was using at the time of the contact. The platform had been added to the U.S. paper charts when installed in 1990, but for an unknown reason was omitted 20 years later, in 2010, from two larger-scale U.S. paper charts. It remained off the two paper charts and electronic navigation charts (ENCs) for over 11 years—until after the contact. Following the contact, the National Oceanic and Atmospheric Administration (NOAA) updated and corrected the electronic and paper charts that had been erroneously missing platform SP-83A.

The NTSB determined the probable cause of the contact of the Ocean Princess with platform SP-83A was poor bridge resource management, which resulted in the bridge team not identifying the platform and recognizing the risk it posed to their safe navigation even though they saw its lights about 10 minutes before the casualty. Contributing was platform SP-83A not being shown on the vessel’s electronic chart display and information system due to a charting error.

The effective use of all available resources by a bridge team, including paper charts, electronic charts, and radars, increases collective situational awareness and contributes to a safe navigation watch. When identifying hazards, bridge teams should avoid over reliance on a single data source by cross-checking information with available bridge resources and communicating identified risks with fellow watchstanders to ensure a shared mental model.

Increasing operator vigilance and combating over reliance requires healthy skepticism about situations and information sources regardless of how accurate they could be, or how confident one is in their own assessment. In this casualty, the electronic chart display and information system (ECDIS) was missing the oil platform struck by the vessel due to a charting error.

The vessel’s safety management system noted, “ECDIS is a valuable asset in assisting navigators and allowing them more time to maintain a proper lookout by providing them with more detailed situational awareness.” However, it also warned, “navigators should always cross check ECDIS information with the other sources,” and, if not used properly, “ECDIS may contribute to accidents rather than preventing them.” The inability to recognize the fallibility of technology, such as an ECDIS, can result in operator over reliance and overconfidence that degrades sound navigation practices and negatively affects situational awareness.

Although not specifically mentioned in the NTSB’s determination of probable cause, the full report notes in its analysis that “the effects of fatigue likely impacted the master’s performance in simultaneous roles as master and lookout, affecting his judgment and situational awareness in the events before the contact.”

Another issue dealt with in the analysis, is distraction, with the report saying, “competing tasks, such as critical stability calculations, and personal conversations in the period leading to the contact likely distracted both the master and the second officer from their primary navigation duties. Distraction can reduce operator vigilance and negatively affect situational awareness.”

For more details, you can download the NTSB report below: