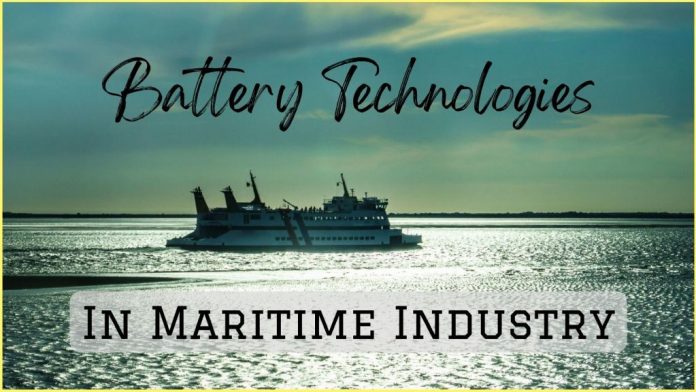 (www.MaritimeCyprus.com) Interest in shipboard battery systems has seen a rise in recent years. The possibility of reducing energy costs and environmental impact makes battery technology valuable for maritime use. Batteries can be used in a wide variety of applications, like peak-shaving in hybrid systems to help engines work at optimal loading and increase efficiency.

They can be used to run motors or as a backup power source to reduce generator load. This could lead to reduced fuel costs for both propulsion and electric power generation. Battery systems work well with discontinuous renewable energy sources such as solar or wind energy, allowing their energy to be converted and stored for use at times when electric power generation is not available.

The International Maritime Organization’s (IMO’s) decarbonization targets make battery systems even more valuable. Reducing fuel consumption through the use of hybrid systems can aid greatly in reducing emissions to meet environmental requirements. For hybrid systems to be effective, there is a need for efficient and sustainable battery technologies that can provide the power needed for such a system. Improved batteries also allow for renewable energy to be further implemented, potentially reducing emissions. As emphasis continues to increase on reducing environmental impact, this may be an essential technology for an eventual shift to more hybrid or even all-electric vessels.

ABS has published an advisory exploring the advantages and challenges that come with hybrid systems on vessels, looking at technologies like solar energy and fuel cells that may be useful in such a system. This paper looks specifically at battery technologies and their potential impact on the maritime industry.

Lithium-ion (Li-ion) batteries are currently the most prominent battery technology in maritime applications. They have been shown to be useful for electrical energy storage and electricity distribution on vessels. Li-ion batteries are made of positive and negative electrodes (called the cathode and anode, respectively), an electrolyte and a separator.

Despite many advantages over older battery technologies, Li-ion batteries have their own limitations. Li-ion systems require complex monitoring systems to keep them within the proper operating range for temperature and voltage.

They are susceptible to thermal runaway, where a temperature rise can cause a self-sustaining chemical reaction and a further increase in temperature. This can lead to battery failure and potential ignition of the electrolyte separator and electrodes, causing a fire in the battery system. Battery management systems and fire protection systems must be in
place to prevent this from happening and prevent further damage in the event of a thermal runaway. Some research indicates Li-ion batteries have very nearly reached their theoretical limit in energy and power density. This limits their potential for maritime applications where higher power and energy levels are needed, as more space is needed for a larger battery system to accommodate increased electrical load requirements.

The safety risks and energy limitations surrounding Li-ion batteries have sparked interest in other battery technologies both existing and being researched now that could be used as alternatives. A few of these technologies are metal-air batteries, REDOX flow batteries, ammonia batteries and solid-state batteries. These potential alternatives to Li-ion batteries are in different stages of research, but they may show promise for battery systems to become more practical and widespread in maritime applications in the future. 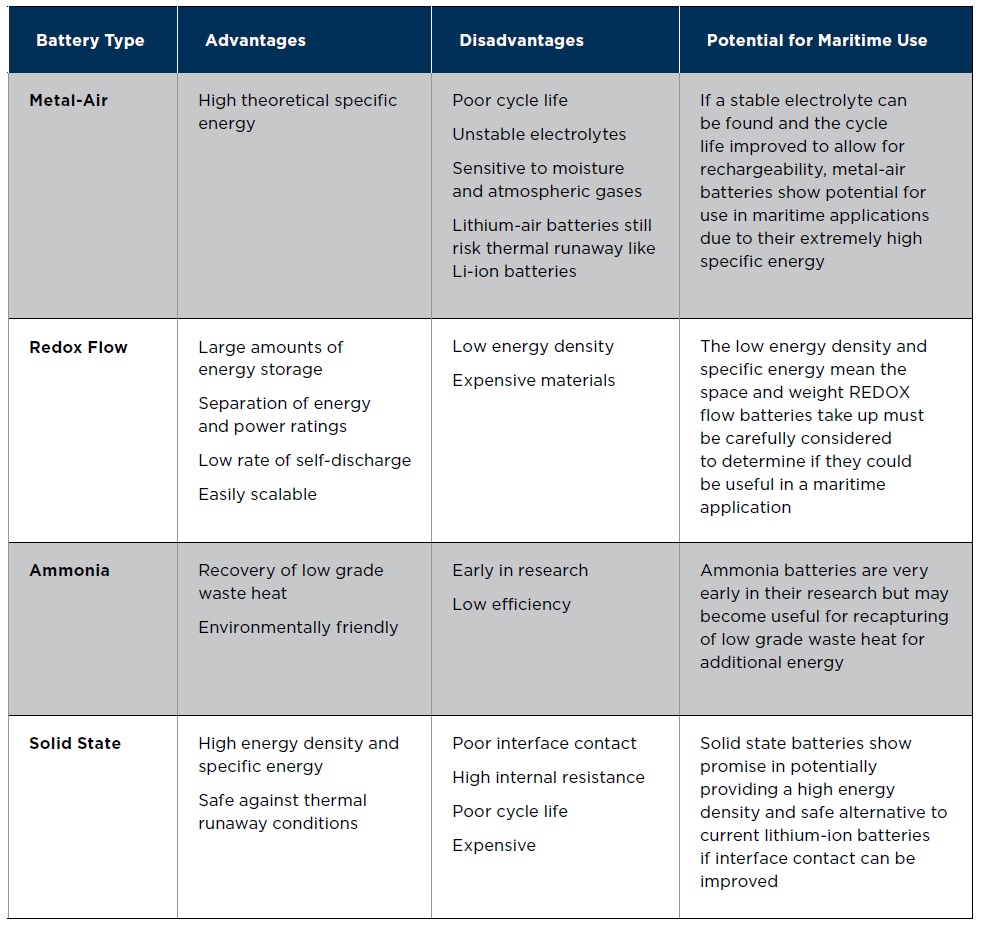 For more details, you can download below the relevant advisory paper published by ABS: