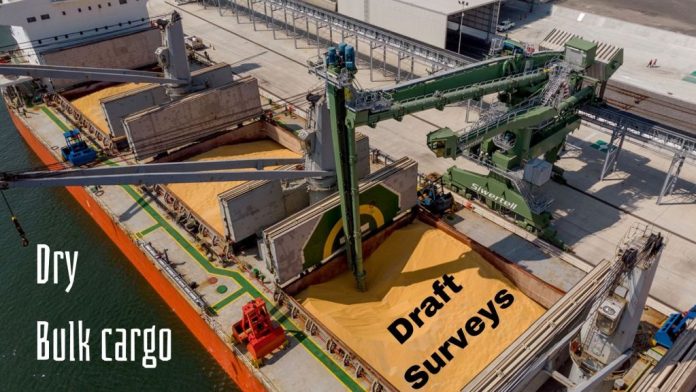 (www.MaritimeCyprus.com) Draft surveys of bulk cargoes are a means of checking that the shipper's figures inserted in the bill of lading are correct. The receiver has paid for the quantity stated in the bill and that figure is prima facie or even conclusive evidence that the amount stated was loaded aboard. A draft survey may be the best evidence to refute claims for shortage, so we recommend that members routinely order draft surveys for dry bulk cargo.

It is generally accepted that performing a draft survey is not an exact science. Much depends on the weather conditions at the time, the swell, the accuracy of the draft marks and the care which is taken in carrying out the required calculations. Nevertheless, the accuracy of a draft survey which has been properly performed is generally regarded as being up to more or less 0.5 per cent of the final figure for dry bulk cargoes. Therefore, barring exceptional circumstances, such as a high swell during the survey, if the difference between the shore figure and the draft survey figure is greater than 0.5 per cent, it may well represent a physical gain or loss, rather than being simply a “paper” difference. The latter is of course just that – a difference on paper only. Such a difference is usually the result of the inaccuracies inherent in the different measurement methods which are used.

However, if the figure that the shippers wish to have inserted into the bill of lading is greater than the draft survey figure by more than 0.5 per cent the alarm bells should ring, both on board and in the shipowner’s office. The reason is that the quantity stated in the bill of lading will often be legally binding as against the shipowner, whether or not it is in itself accurate, and the shipowner may be prevented (the legal term is “estopped”) from arguing that the bill of lading figure was wrong and that the “excess” cargo was in fact never loaded. According to the Hague-Visby Rules, the carrier is obliged, upon the demand of the shipper, to issue a bill of lading stating, inter alia, the quantity or the weight of the goods. Once issued, the bill of lading is, subject to any valid qualifying statements on the bill of lading itself, prima facie evidence of the quantity or weight recorded on the bill, but once negotiated, i.e. endorsed, by the shipper in favour of some other third party, it will in most cases amount to conclusive evidence in the hands of a third party acting in good faith. It follows that the carrier must inspect the goods diligently upon receiving them for shipment by conducting draft measurements for bulk cargoes. Following such inspection, any discrepancies or deficiencies should be appropriately recorded in the mate’s receipts and, subsequently, on the bills of lading. The proviso to Article III Rule 2 of the Hague and Hague-Visby Rules emphasises that neither the carrier nor his agent nor the Master is obliged to issue a bill of lading recording a quantity of the goods which they had reasonable grounds for suspecting not accurately to reflect the quantity actually received or which they had no reasonable means of checking.

Bulk cargoes are commonly shipped under bills of lading which include wording such as “said to weigh” or “said to be” or “weight, measure, marks, numbers, quality, contents and value unknown”. In some jurisdictions such clauses, even if printed rather than typed on the face of the bill of lading, will mean that the bill of lading is not even prima facie evidence of the quantity stated to have been shipped. The burden of proof will therefore be on the cargo claimant to prove the quantity which he says was shipped. Such a clause will normally be upheld by the English courts. Unfortunately, the courts of many other countries will not recognise such a printed clause, on the ground that it merely forms part of the standard wording of that form of bill of lading and has not been added solely in connection with that particular shipment. It is therefore essential that such wording is typed or handwritten on the front of the bill of lading, whether or not the bill of lading form includes such printed words. However, it should be noted that some jurisdictions will not uphold such clauses at all, whether printed, typed or handwritten on the bill of lading. Therefore, clausing with “number, quantity and weight unknown” In circumstances where the difference is not normal or customary, it is insufficient to clause the bill of lading with the words “number, quantity and weight unknown”. If the Master has been able to determine the number, quantity or weight loaded, such clausing is clearly not true. Such clausing should, however, still be used in circumstances where the difference is normal or customary.

This brings us back to the importance of a draft survey, which is the only means those on board have of checking the shipper’s figure. The latter will usually be based on measurements carried out ashore. The Master will have had no means of checking these measurements. For various reasons, the shipper’s figure may not be accurate and if the draft survey gives a figure which is more than 0.5 per cent below the shipper’s figure, the Mate’s receipt and bill of lading should be claused to reflect the fact that there is probably a physical shortage of cargo. The clausing should clearly state the draft survey figures and should be as accurate as possible. In order to avoid the clausing charterers may offer a LOI holding the shipowner harmless if they agree not to do so. However, Members should be aware that such LOI may be unenforceable if a court or tribunal comes to the conclusion that they were given in order to try to persuade the shipowner to help the charterer or shipper to mislead an innocent third party, such as the buyer of the cargo, acting in good faith.

There are of course a number of practical problems which can arise. It may have been agreed that the bills of lading will be issued and signed by the local agent, who will often be acting on behalf of the charterer. The charterer may also be the shipper himself or connected to the shipper in one way or another. The shipper will almost certainly be invoicing the consignee on the basis of the weight or quantity stated in the bill of lading. Nevertheless, the bill of lading is likely to be signed and worded in such a way that it evidences a contract of carriage with the shipowner, not the charterer. In these circumstances, it can be difficult for a Master to ensure that the bill of lading is issued and signed in the form and wording he considers appropriate (i.e., in strict compliance with the Mate’s receipts).

What he can do is:

(2) to ensure that the Mate’s receipts are properly worded and where appropriate, contain the ship’s figures as calculated by draft survey.

It is important to stress that both steps outlined above should be taken. One by itself is not sufficient. These steps will not guarantee that the charterer or his agents do in fact issue bills of lading as authorised by the Master. Nor will they guarantee that the shipowner will have a defence to any claim for alleged cargo shortage which may be made by the consignee. However, they should mean that, if the shipowner incurs liability to the consignee because of the failure by the charterer or his agent to issue and/or sign a bill of lading on the authorised form, the shipowner has a good chance of succeeding with a claim for indemnity against the charterer under the charterparty.

A further point to be made is that, under the Association’s Rules, no cover is available for “liabilities, costs and expenses arising out of the issue of a bill of lading, waybill or other document evidencing the contract of carriage, known by the Member or the master to contain an incorrect description of the cargo or its quantity or its condition” (Rule 34 (1)(ix)). Therefore, cover would be denied under this Rule if the Member or the Master knew that the quantity shown in the bill of lading was wrong but nevertheless failed to clause the bill and incurred “liabilities, costs and expenses” as a result of such failure.

It is sometimes the case that the bulk cargo is divided in a number of relatively small parcels – say five separate parcels, each of 1,500 MT. Assuming there is no separation on board between these parcels, the only time at which a draft survey can usefully be carried out is on completion of loading the entire cargo at the specific port. The charterers and shippers will almost certainly want the vessel to leave as quickly as possible but provided the relevant tables have been checked beforehand, a draft survey should not take more than a couple of hours at the most. In the Association’s view, the investment in this short period of time, both after loading and before the start of discharge, is worthwhile.

The Association has handled a large number of claims for the alleged loss of agricultural products in particular. Typically, these claims will be for the alleged loss of anywhere between 0.5 per cent and five per cent of the bill of lading figure. There is little doubt that virtually all such claims are “paper losses” and that the vessel delivered all the cargo received on board. Sometimes, however, such an argument is not sufficient to defeat a claim. This is where the draft survey reports show their value, as they serve as an independent record by the vessel of the quantity received on board at the port(s) of loading and the quantity on board before the start of discharge. If the hatch covers have been sealed after loading and these seals are intact before the start of discharge (and the fact that they are intact is witnessed by the consignee), this is an additional indication that no loss of cargo could possibly have occurred during the voyage.

As mentioned above, the carrier’s obligation to state accurate figures on the face of the bill of lading derives from the provisions of the Hague and Hague-Visby Rules. Shipowners are therefore recommended to arrange for draft surveys, both after loading and before discharge, whenever a bulk cargo is being carried. The Association will arrange for such surveys through its local correspondents. The cost involved is normally for the Member’s account in the first instance, but if the report is used in defence of a claim, the cost may be recovered from the Association. Furthermore, if the report results in a claim being rejected and withdrawn, this will reflect favourably on the Member’s loss record.